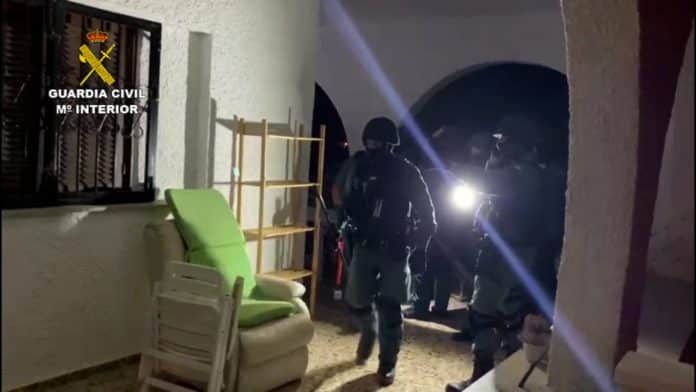 As part of their continual clampdown on drug trafficking in the area, the Guardia Civil has dismantled a European-wide drug distribution network, with house searches being carried out on the Orihuela Costa, Torrevieja, San Miguel de Salinas, Crevillent, Agost, Miranda-Cartagena and Balsicas-Torre Pacheco.

The action is part of Operation Hermar, and has resulted in a large quantity of drugs, vehicles, mobile devices, documentation and weapons being seized, and three of the arrestees being remanded in custody by the courts in Orihuela.

The investigations began in January 2022, specifically in the customs area of ​​the Alicante-Elche Miguel Hernández Airport, when the Fiscal Analysis and Investigation Office (ODAIFI) intercepted two packages with more than 2,200 kilograms of hashish bound for France.

The Territorial Team of the Judicial Police of Pilar de la Horadada, in order to clarify the origin and the senders of the drug, began the Hermar operation.

In a first phase of the operation, after analysing all the information and evidence obtained, the investigators identified two 28-year-old French men who, habitually and with forged documentation, sent parcels to France, Belgium and the Netherlands.

After a search of those investigated, the agents located their homes and a clandestine cannabis association with which they were related, all located in Orihuela Costa. The person in charge of this illegal club was a 26-year-old Russian man, who worked for those investigated in relation to the sale and purchase of marijuana.

In the month of February, at the Valencia-Manises International Airport, two new packages with more than 2 kilograms of marijuana and destined for the Netherlands were intercepted. Those investigated, realising that their packages did not reach their destinations, modified the modus operandi, making their subsequent drug shipments from an ordinary mail office.

In a new phase of the operation, after obtaining information from the UK authorities, the supplier of the drug was identified, being a 30-year-old British citizen and resident of Orihuela Costa. He himself, along with others under investigation, owned 5 indoor marijuana plantations throughout the province of Alicante.

On September 1, through a routine control where the son of the supplier, a minor, was arrested for drug trafficking in San Miguel de Salinas, it was possible to verify how he did not hesitate to use his own son with an electric scooter to make retail sales.

The exploitation phase of the operation was carried out on September 28, carrying out nine house entries and searches in Orihuela Costa, Torrevieja, San Miguel de Salinas, Crevillente, Agost, Miranda-Cartagena (Murcia), Balsicas-Torre Pacheco (Murcia), and also a new one in the clandestine cannabis association of Orihuela Costa.

The records ended with the arrest of eight men, aged between 23 and 50 years of French, British, Russian, Bolivian, Colombian and Spanish nationality, and a British minor.

The next day, two women of Bulgarian and Colombian nationality, aged 27 and 38, were also investigated for the same events.

According to their degree of participation, those investigated and detained, most of them with police records for similar acts, have been charged with the crimes of belonging to a criminal group, drug trafficking, falsifying a public or official document, and illegal possession of weapons.