EXPERTS are urging people to learn about glaucoma and have regular eye checks to help protect their vision from glaucoma – one of the leading causes of blindness in the world[1].

According to the World Health Organization (WHO), glaucoma is the second cause of blindness globally, after cataracts, and cases are increasing. Alarmingly, new research conducted to mark World Sight Day (October 13) by Specsavers[2] shows that almost half of the people surveyed (48%) don’t know what glaucoma is. This survey also revealed worrying misconceptions around glaucoma, with 42% of respondents not worrying about it because they think ‘it’s rare’ and 40% of respondents wrongly believing that it can be cured.

This lack of awareness and knowledge is compounded, as due to its gradual onset, many people don’t realise they have the condition before it is too late. That is why this World Sight Day Specsavers Ópticas is sharing information about glaucoma and a real-life example of how glaucoma is affecting people in Spain. 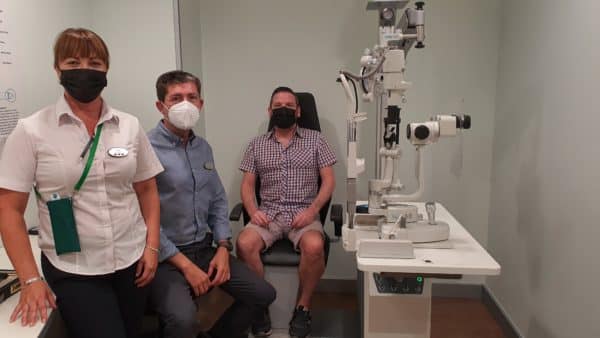 Francisco Jurado, Director of Specsavers Ópticas in La Zenia, Torrevieja and Guardamar, says: ‘Glaucoma is a common eye condition where the optic nerve, which connects the eye to the brain, becomes damaged. It’s usually caused by fluid building up in the front part of the eye, which increases pressure inside the eye.

‘Glaucoma can lead to permanent loss of vision if it’s not diagnosed and treated early, as a customer at our La Zenia store sadly found out.’

Douglas Addison, who had a family history of glaucoma and was first diagnosed with it 10 years ago, noticed he was losing his peripheral vision last year – a common sign that the glaucoma is permanently damaging sight.

He booked an eye test at Specsavers Ópticas in La Zenia and the optometrist found that his eye pressure was extremely high. They urgently referred Mr Addison to hospital where they confirmed his diagnosis and performed a surgical procedure to stop the glaucoma getting worse.

Unfortunately, he lost 75% of the vision in his right eye. But Mr Addison remains very grateful to the team at Specsavers Ópticas in La Zenia for the referral, and the surgical team who stopped him losing vision in both eyes. Mr Addison wants to tell his story for World Sight Day to raise awareness of the importance of regular eye tests, not simply to see if you need glasses, but to check the health of your eyes and protect your vision.

‘I’d also like to say a big thank you to the team at Specsavers Ópticas in La Zenia. If their optometrist hadn’t sent me to A&E, I would be blind. While I did lose sight in one eye, I can lead a full life and am so grateful that with the operation and treatment my vision won’t get worse.’

How to protect your vision for World Sight Day and beyond?

Mr Jurado says, ‘Come in for regular eye examinations every two years, every year if you have a family history of glaucoma. We take every precaution to make sure that the environment in store is a safe and reassuring place to be. A full eye examination only takes approximately 1/2 hour and could save your sight. Don’t be afraid to come!’

For more information or to book an appointment visit: www.specsavers.es