Expectations are high within the Thader camp, for pre-season preparations indicate that last season’s play offs are set to be mirrored in the new season.  Being the centenary year, a new kit and badge have been unveiled, with other events to be announced throughout the season.

Manager Raul Mora has not only recruited wisely, but has also been able to retain the services of key players within the squad.

So, an opening day visit of Carrus Ilicitana to Moi Gomez stadium shouldn’t have presented too many problems, especially as the Elche based team finished in 11th place last season.

But, having strengthened their squad, Carrus will certainly be no push overs this season.  With Quino unavailable through work commitments, and Javi serving the first of a 6-match ban for a post-match incident at Patacona, other squad players were given a chance to shine.

It took until the 16th min before either side had a shot on goal, which befell to Thader’s Rulo, forcing a fine low save from Miguel in the visitor’s goal.  An early injury to veteran Ruben, saw Juanlu take his place in Thader’s midfield.  A nasty looking foul by Dori on Rosquin, resulting in a booking for the Carrus defender, which would later prove costly.  On the half hour mark, Argentinian Guido (making his debut for the hosts, following his move from Almoradi) was the next entry into the ref’s little black book. 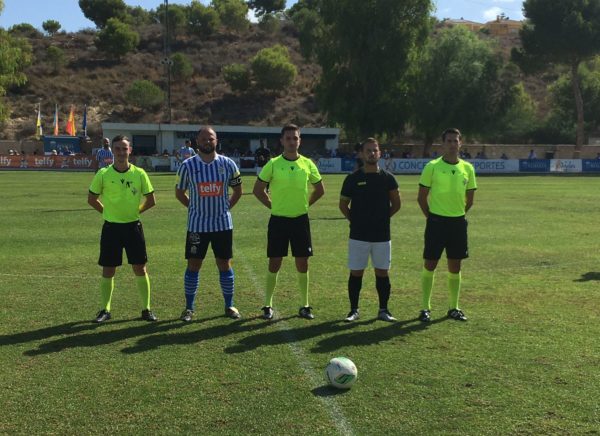 From the free kick, Amine produced a wordly save to tip a goal bound effort over the bar.  Then from the next attack, a through ball by Dani Lucas was struck narrowly off target by Juanlu, as Thader made an instant counter attack.  It was now end to end stuff, when on 41 mins an effort by Robillo, was once again suitably dealt with by Amine.

With the electronic scoreboard showing 44 mins 54 secs, a foul on Rosquin inside the box, resulted in a penalty to Thader.  In addition, the ref also showed Dori a 2nd yellow, then red card for the offence.  Captain Lloyd superbly executed the resultant penalty, the last action of the half.

Pedro became Thader’s second player to be booked early on in the 2nd half, before team mate Roquins’ long-range effort was turned around the post by Miguel.  As expected, the game became somewhat heated, so much so that Rosquin was the next man in the brand-new blue & white strip to see yellow.

A rare strike on goal from Berni, produced a save at the foot of the post on 67 mins, as the hosts were going hell for leather to produce the all important 2nd goal.  But, and there’s always a but, the unexpected happened on 83 mins.

A deep left wing cross to the far post, required Amine to produce a superb save from a firm Ivan header, only for Gomed to stab home the rebound.

So, the 10 men of Carrus had earned what looked like being an unlikely point, which could have been 3 had the cross bar not come to Thader’s rescue on 88 mins.

Having said that, the drama was far from over, for following another Thader booking, when Jony spoke out of turn, substitute Calderon was denied what seemed a nailed-on penalty for a blatant push in the box during stoppage time.

Next Sun 11 Sep, ko 1130, Thader are at home to Racing Benidorm.  This match was originally scheduled as an away fixture, but due to their pitch being reseeded, it has been switched to Moi Gomez stadium, Rojales.