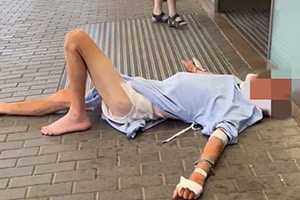 The Plataforma Sanidad Excelente, a group set up to “Defend the quality of health care in the Department of Health 22, which encompasses the municipalities of Torrevieja, Orihuela, Guardamar, Pilar de la Horadada, Rojales, Los Montesinos, San Fulgencio and Benijofar”, have shone another light on the problems facing patients looking for treatment at Torrevieja hospital, with an image they describe as showing “patients abandoned at the doors” of the facility.

The group is demanding that someone from the Valencian Government, “for humanity”, becomes “responsible and avoids that day after day the doors of the Torrevieja Hospital emergency room become the worst promotional image of the Valencian Community, by allowing that sick and even hospitalised people left lying on the floor and at the very doors of the emergency room in an apparent state not only of abandonment but of complete inability to govern themselves.

“Social networks are echoing the truth of the facts that we are denouncing,” they argue, adding that “everyday a more embarrassing image or video appears of the state of abandonment of older people, even dressed in clothing from the Ministry of Health and with lines in their arms as a testimony of being hospitalised patients and that lying on the floor they are found at the very doors of the Hospital emergency room losing absolutely their dignity as human beings”.

The president of the platform, Mamen Mateo, has declared that “the promotional efforts of the tourist destination of the Costa Blanca and the Valencian Community are called into question when, through new technologies, we see that unspeakable and avoidable images of people in absolutely unfortunate conditions are produced”.