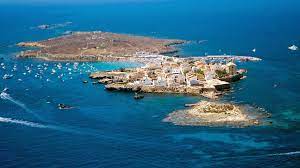 The Minister of Agriculture, Rural Development, Climate Emergency and Ecological Transition, Mireia Mollà, and the Councillor of the Alicante City Council, Rafa Mas, both from Compromís, have jointly presented their proposal to the Tabarca Cultural association to declare the island as a reserve of the UNESCO Biosphere.

Likewise, they have claimed they want to annul the reserve zone for the expansion of the port of Alicante because “it would directly affect the seabed included in the protected marine space of Tabarca”.

The objective is that socioeconomic development and environmental and heritage aspects go hand in hand, so the councillor has assured that “the proposal seeks to reconcile economic, tourist, social and cultural activities with the conservation, protection and sustainability of the environment”.

“We must protect this jewel of the Mediterranean at a natural, patrimonial and social level, for this reason, we want to raise its degree of protection and declare it a biosphere reserve”, affirmed Mas, who added that “Tabarca is home to a jewel of Mediterranean biodiversity”.

The Compromís councillor explained some of the benefits of the island being declared a reserve, including establishing a framework to meet the United Nations Sustainable Development Goals, ensuring the conservation of marine habitats and species or protecting the coast of the effects of climate change.

Mas assured in the meeting with the neighbourhood association of Tabarca that “the proposal must have the consensus of all the agents that intervene on the island and its neighbours”, in addition to confirming that ” the minister has promised to celebrate a general assembly on the island during the next quarter to publicise the proposal and gather support”.