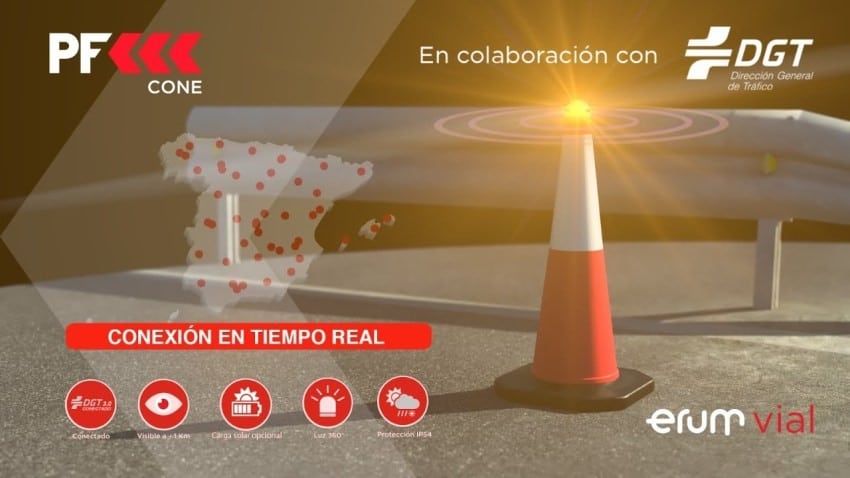 Although, at first glance, they may look just like any other traffic cone, the DGT has been testing a new version of the somewhat infamous road safety device, the Smart Cone.

PF CONE, to use the actual name, is the first and only geolocated cone in the world and has been developed by ERUM VIAL in collaboration with the DGT.

The cone is capable of connecting with the new platform that the General Directorate of Traffic (DGT) is developing, known as DGT 3.0, as well as other government entities, State security forces such as the police and Guardia Civil, and the fire department, among others.

PF CONE provides information on the exact location where an accident, incident, natural disaster or area where road maintenance work is being carried out has occurred.

It has a high intensity flashing light, 360º retroreflective tape and a solid base that provides maximum stability and adherence to all types of terrain, especially asphalt. PF CONE has NB-IoT connection, long battery life, optional solar charging, multiple synchronisations through remote control and sim card connected to a telephony operator.

PF CONE has been designed to signal and geolocate places where there is danger, some type of risk, emergencies, breakdowns or accidents, especially areas where road maintenance tasks, asphalting of roads, works, fire zones, floods, etc. or other danger zones.

The direction of the DGT towards road safety and the goal of achieving zero fatal incidents on the road is increasingly more technological. We have already seen how road users can now use the V-16 beacon lights to replace triangles, but in the future these devices will also be able to connect to the DGT 3.0 platform, so that the exact location of an individual emergency is known in real time, all that remains is for the signals to become smart and connected. Precisely, this last step is the one that is being tested with the smart cone, and, for the moment, the results are satisfactory.

The General Directorate of Traffic is launching the use of its new intelligent cones, which are distinguished from the traditional ones only by two small devices, as if they were light bulbs, that protrude from the tip of the cone. With this new accessory, the cones become beacons connected to the digital platform of the DGT and to the vehicles, in turn, connected to that.

The objective is for there to be a constant flow of information between what is happening on the road and the vehicles that circulate on it, in order to avoid unforeseen events and maintain safety thanks to the ability to anticipate traffic conditions in real time.

The first field tests have been carried out during the ‘Gran Fondo Ézaro-Fin do Camiño’ test, held on the Costa da Morte (Galicia) in July. Thanks to these cones, in addition to other devices, the vehicles were able to have all the necessary information in real time about the sections affected by this cycling test to choose the route that best suited them without suffering delays or excessively long detours.

During the development of the DGT 3.0 sports tests, V2 beacons were used in the start and tail cars of the competition, as well as smart cones on the roads surrounding the route of the sporting event that broadcast information to the platform at all times. Once processed and compared with the route of the sporting event from TRAZA (the DGT application for sports authorisations), the sections affected by the event could be published in real time. This process allowed participating drivers to be sent notices to their car navigators.

The evaluation of the DGT of the test has been positive and, thus, a further step has been taken in the objective of creating a platform in which all the actors who make use of the circulation routes are connected anonymously, both for provide information to consume it, in order to detect and receive information about dangerous situations that may arise on the road while driving.

The Connected Vehicle 3.0 platform becomes an access point for unique, free and truthful information in real time about what is happening on the roads, information of great value for the entire mobility ecosystem in the national territory