DONALD Campbell’s Bluebird flipped six times. All the cameramen on the banks of Lake Coniston kept their eyes on the boat, bar one.

“It was 3.30 pm on Wednesday January 4, 1967, when we got the call from our base aboard HMS Safeguard. We were tasked with finding the wreckage of Bluebird.

“At dawn the following day the search began. We dived in the area where the front of the nose cone was broken off,” recalled Octogenarian Peter, 81. 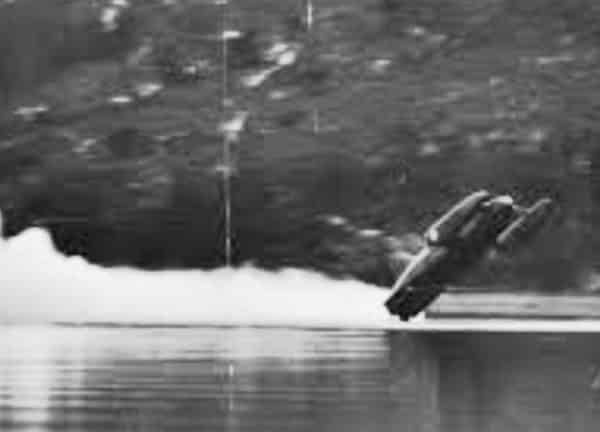 “I found his seat belt – it was only held on by one bolt. All the other straps and bolts had been ripped out,” said Peter, speaking exclusively to The Leader.

“I was a diver based in Rosyth, Scotland, and one of the ten guys of a team of Royal Navy divers that went searching for Donald Campbell’s body,” said Peter.

Peter and his colleagues were risking their lives, sitting in black rubber dinghies from dawn to dusk, before plunging into the dark depths of Coniston water, wearing rubber diving suits.

Head of the team was 38-year old Lieutenant Commander John Futcher: “He was determined to find Campbell’s body and bring it ashore,” said Peter.

“The Campbells, father and son, had been his heroes since boyhood.

“We located the wreckage on the first day. Then we found the nose of the boat, under the spot where she hit the water – about 300 feet south of the main wreckage.

“The painstaking search went on, we covered an area 800 ft by 350 ft but only pieces of equipment were found.

“Each diver was doing one dive a day, 140 ft to the treacherous bottom of Lake Coniston. It was spooky. Sometimes you could see ten feet, other times only a couple of inches as the mud swirled around you like a thick fog.

Campbell remains the only person to set both world land and water speed records in the same year, 1964. He died during a water speed record attempt at Coniston Water in the Lake District, on January 4, 1967, aged 45.

Campbell’s body was eventually found on May 28, 2001 and was subsequently buried at the Parish Cemetery, Hawkshead Old Road, Coniston.

The wreckage of Campbell’s craft was recovered by the Bluebird Project between October 2000, when the first sections were raised, and May 2001, when Campbell’s body was recovered.

Campbell would not have had time to deploy the relatively slow-moving brake, as the boat flipped out of control.

The wreckage evidenced an impact from left to right, wiping the whole front of the boat off in that direction. Campbell’s lower harness mounts had failed and were found to be effectively useless.

Further dives recovered various parts of K7, which had separated from the main hull when it broke up on impact.

When part of Campbell’s body was located and recovered from the lake on 28 May 2001, he was still wearing his blue nylon overalls. However, a consultant engineer giving evidence to the inquest said the force of the impact could have caused him to be decapitated. His skull was not present and is still missing.

John Futcher, who emigrated to Australia, said at the time, “This search for Donald Campbell id one that none of us will ever forget. He was our sort of man.”