We can now travel out of Valencia, but if you are like me, and lots of others still a bit wary about going too far and mixing with too many people just yet, only 45 mins South is Cartagena. A lovely city to visit for a day trip or longer.

It used to have so many visitors from the cruise liners that used to stop in the port before Covid days – but now there are fewer. Trade must be a lot slower for all there now. For us though is it so close to go to and so much there in this 2,500 year old city, with so many historic features to visit and explore.

One of the oldest features is the Roman Theatre, built in the reign of Emperor Augustus and has been restored and is open to visitors. First you can venture through the indoor museum where artefacts found when excavating the Roman Theatre are exhibited, then onto the outside theatre.

Built between the 5th and 1st Century BC the theatre had remained hidden for several centuries. It is a must see with seating excavated out of the rock and a stage of around 43 metres in length and a wealth of restored artefacts. 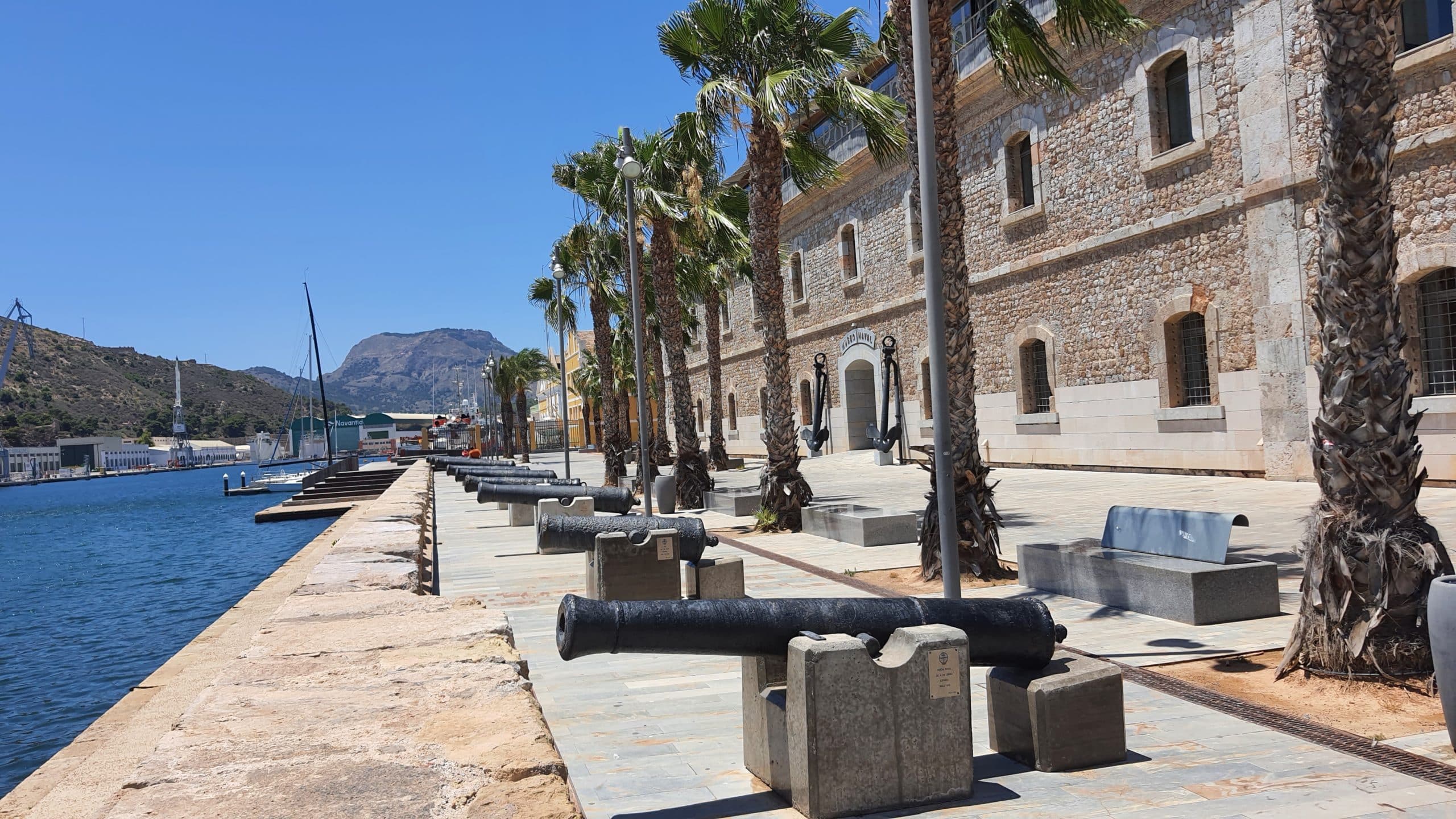 Muralla del Mar Promenade runs along the seafront where you can stop for a drink in the sunshine and soak up the scene of the boats bobbing on the water’s edge. There used to be several picturesque cafes along here, but for the moment they seem to have disappeared, hopefully they will return soon – but there is a Burger King!!!

The promenade leads down towards the port where there is the Midshipmen’s School, the General Services Centre and the National Museum of Underwater Archaeology.

There is a huge carpark under the promenade on the front, and as you come out you are met by a huge bronze statue of a naked man, sitting, hugging his legs in hopelessness.  It is nearly 5 metres in height, and it is there to pay homage of the city to the victims of terrorism.  This is one of several statues around the city. Charles III, Guardian Angel, Columbus, The Whales Tail in the waters of the port (5 metres high by 8 metres high) to name a few. 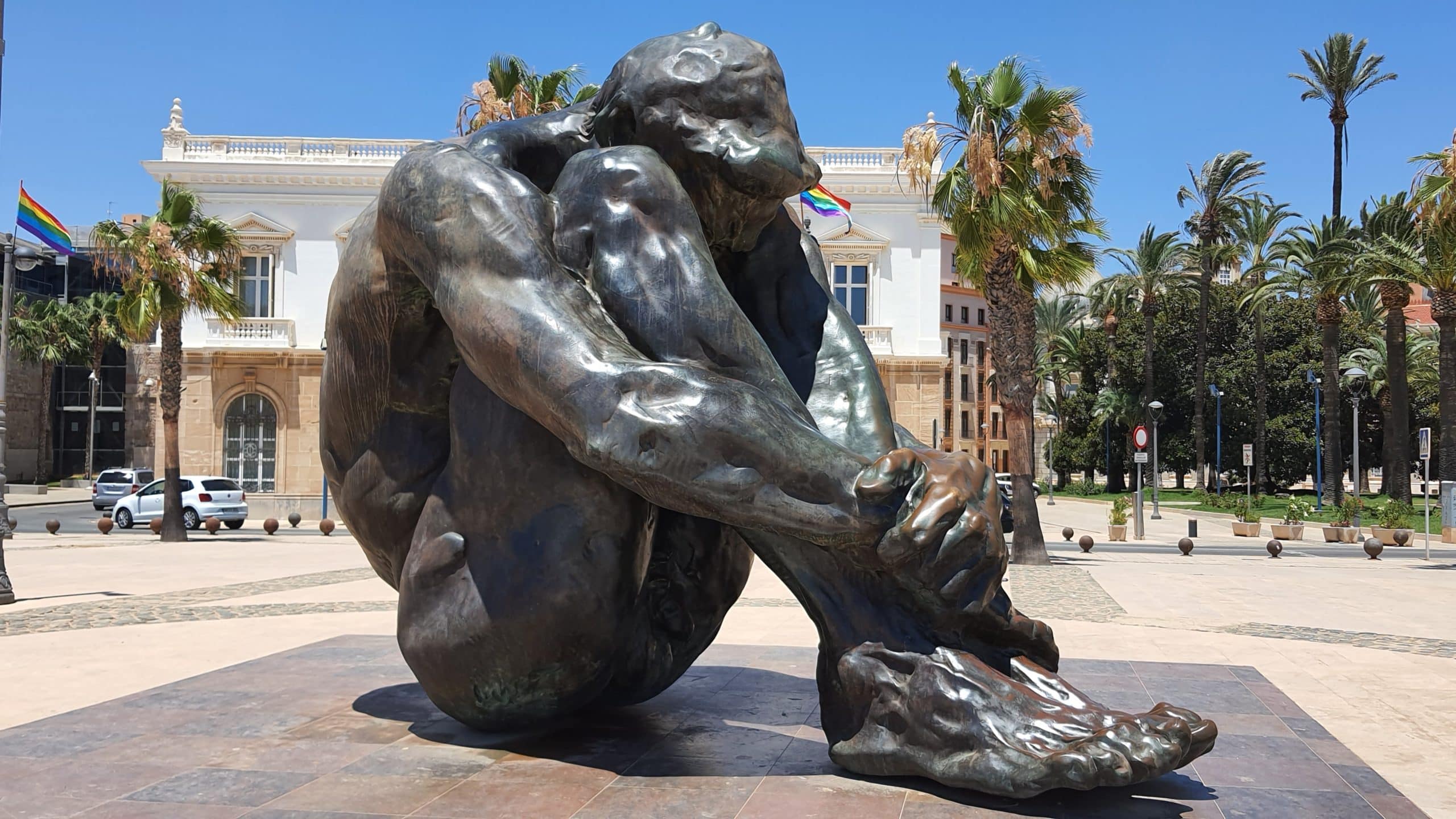 Before the façade of the old sailors training barracks are 12 artillery canons, decommissioned from the Spanish Fleet and were used in the 18th and 19th century and come from different origins. Their origins can be seen on the markings on the barrels.

Amongst the many Museums to see are the Navy Museum, Historical Military Museum, Civil War Museum, and Modern Arts.  The Palacio Consistorial was built between 1900 and 1907. Its façade is extremely ornate, exquisite in its design, with lots of decorative elements.

The Palace is open to the public and you can wander around the ornate rooms and magnificent staircase.

Also, there is a panoramic Elevator that takes you high up to the top of Colina de la Conception. From the top you can enjoy stunning views over the city with its beautiful exemplary buildings.

As you venture into the city the buildings have been restored in such a beautiful way retaining the look of when they were originally built. There are several well-known shops here if you wanted to browse but you can wander around further and take in this lovely city.

There are boats trips on the tourist boat now and they are doing a 45minute trip and a 3hr voyage. The trips take you out to the headland where you can see Christmas Fort, Fuerte de Navidad, on the right-hand side.  Some of the trips stop here so you can visit this coastal battery, which is now a museum showing the everyday life of military men in the 19th century.

You can see where they slept, relaxed, and ate – and even learn to handle a canon.

Cartagena is a historic enthusiasts dream as there is so much to see and marvel at.

Not everyone is aware that Cartagena has a beach, and it has the most picturesque bay.

Cala Cortina is made up of two small bays with one fish restaurant to cater for your dietary needs whether it be tapas or a full delicious meal. I recommend not going on a Sunday as it gets very busy with the locals. It has a carpark with steps leading down to the bay.

Also, there is a dive centre here with many divers taking to the waters.

This little bit of paradise is certainly worth a visit.