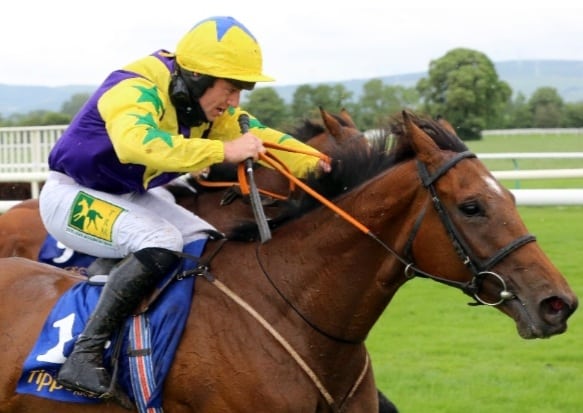 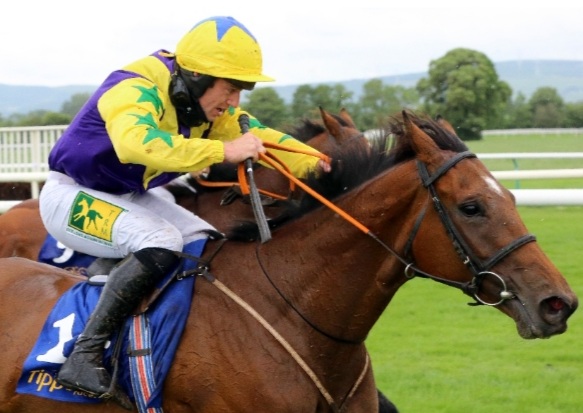 Trainer John ‘Shark’ Hanlon’s canny €670 purchase of former Willie Mullins trained six-year-old Skyace in June 2020 is one of the bargain buys of the NH Turf – with a Cheltenham Festival appearance looming.

Since being under the helm of Hanlon, Skyace has notched up wins at Punchestown, Down Royal, Gowran and Tipperary – after drawing a blank under Mullins.

After Grade Three and a Listed wins, Hanlon said: “Skyace will go for the Mares’ Novices’ Hurdle at Cheltenham.”

Skyace was purchased for €670 (£600) by Cathal McHugh’s Birdinthehand syndicate. Since, winning purses include the €20,650 in Grade 3 company at Down Royal in October.

McHugh, 32, who lives in Abu Dhabi with wife, Aoife, works as a Business teacher at the city’s West Yas Academy.

Acting as agent for Birdinthehand, including Kevin Crean, Kieran Breslin and Kerill Sutton, McHugh said: “I rang ‘Shark’ and he said he was going to look at this horse, Skyace, in the sales.

“It’s been unbelievable. We didn’t get into it to compete in these type of races, we were hoping for a horse to maybe nab a handicap down the road. When you pay £600 for a horse, you don’t expect to be collecting the prizemoney we’ve collected.

“She’s bringing us to these big days. The dream is to go to Cheltenham to the Mares’ Novice’ Hurdle in March.”

After leaving Mullins’ Closutton yard for Hanlon based in County Kilkenny, McHugh said: “John’s very good and all the lads on the yard work very hard. His hospitality is top class. He shows us all the horses and gives us a flavour of how a horse is trained.

“That’s one thing I miss being out here, not being able to go down and see the horse work out. He’s very open about what’s happening, very transparent, and has been great.”

Racing is currently behind closed doors due to the coronavirus situation and spectators attending the Cheltenham Festival hangs in the balance: “I’ve never been to Cheltenham. If we go and if the quarantine rules are relaxed a bit, we’ll be on the first flight home.

“It would just be a dream come true for all four of us involved. I think she’d have a decent chance there with her pace. At Cheltenham, coming up the hill, anything can happen. But she owes us absolutely nothing.”

Hanlon added: “The boys that own her are all in Dubai and are very excited. It’s a dream for them and that syndicate.

“To buy a horse for £600 and go to Cheltenham with a chance is a dream – I think she has a live chance.”