High flying Rayo Ibe midfielder Alexis rattled the bar on 20 mins, but when Nino converted a penalty for hand ball on 44 mins, a shock result was on the cards.  Alexis struck the bar again on the hour mark, but still the Thader defence held firm.  A 2nd yellow card for Victor on 75 mins, Anton equalizing for the hosts on 78 mins, then a Juan dismissal (also a 2nd yellow) a minute later, summed up 5 mins of madness.

Down to 9 men, it was backs to the wall for the visitors, but somehow they survived the closing onslaught, thoroughly deserving a hugely valuable point.

When Benidorm visited Rojales back in early October, their smash and grab performance earned them all 3 points, so not only was revenge on the minds of Thader players, but also a strong desire to keep the recently discovered momentum going.

Deprived of suspended pair Victor and Juan, plus the injured Rafa Gomez, Thader manager Jose Ruiz had no choice but to reshuffle his already depleted squad.  Jose replaced Sergio in goal, whilst there was a place on the bench for fit again Lloyd. 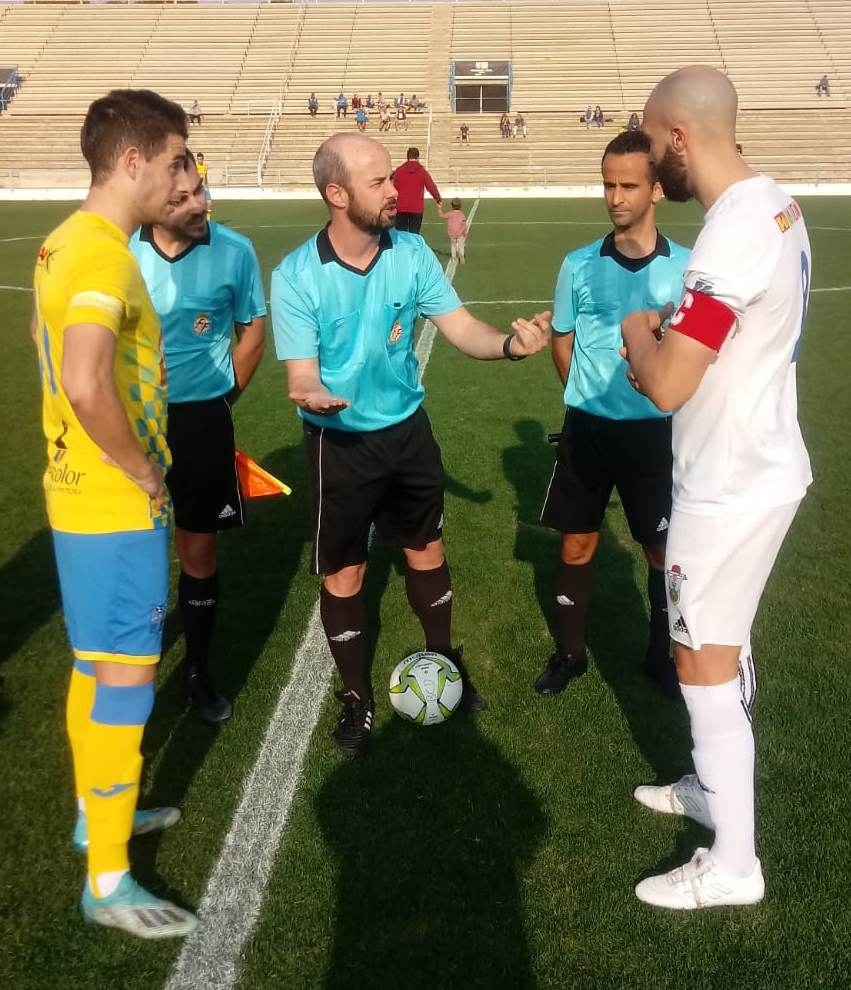 Unfortunately the opening quarter of the match wasn’t one for the purists, but on 23 mins the deadlock was broken.  A deep cross into the hosts penalty area was deftly headed on by the impressive Honrubia to Cris, allowing the bearded (one of many!) striker to smash the ball past the opposition keeper Izan.  Incredibly, this was the first shot on goal, by either side.

Juanito should have levelled 2 mins later, but with just Jose to beat, he shot horribly wide.  At this point, ref Mejias chose to start brandishing yellow cards at regular intervals, an act which totalled no less than 10 (7 for Thader) by the full time whistle.  On the stroke of half time, a long range Benidorm free kick, once again failed to trouble Jose, even though it was a bit too close for comfort.

The men from the town that made ‘Sticky Vicky’ a legend, came out for the 2nd half like a team possessed. They created good opportunities on 55 and again on 62 mins, but on both occasions they failed to test Jose, who by this stage was earning easy money.  But as so often happens in this game, if you don’t take your chances, then you get punished.

A warning was given when Thader thought they’d scored a 2nd on 69 mins, but although it was ruled out for an infringement, it just delayed what was to be the decider minutes later.

Substitute Jose picked up a loose ball some 30 yard out, then with acres of space, unleashed a scorcher which bulged the back of the hosts net.  Honrubia almost made it 3-0 on 80 mins, but his firm header was inches off the mark.  If the 1st half was a bore, the 2nd was far from it, as both Sangue and Ivan shot wide for Benidorm, before Thader’s full back Alvaro missed a sitter deep into stoppage time.

Next Sunday, ko 5pm, Thader visit 5th place Callosa.  This game should have been a home fixture, but due to the Gota fria in September, Callosa played all matches away until their pitch was again in use, hence the reversal. Up to 13th place on 23 points, Thader are oozing confidence, and are at long last a match for any team.