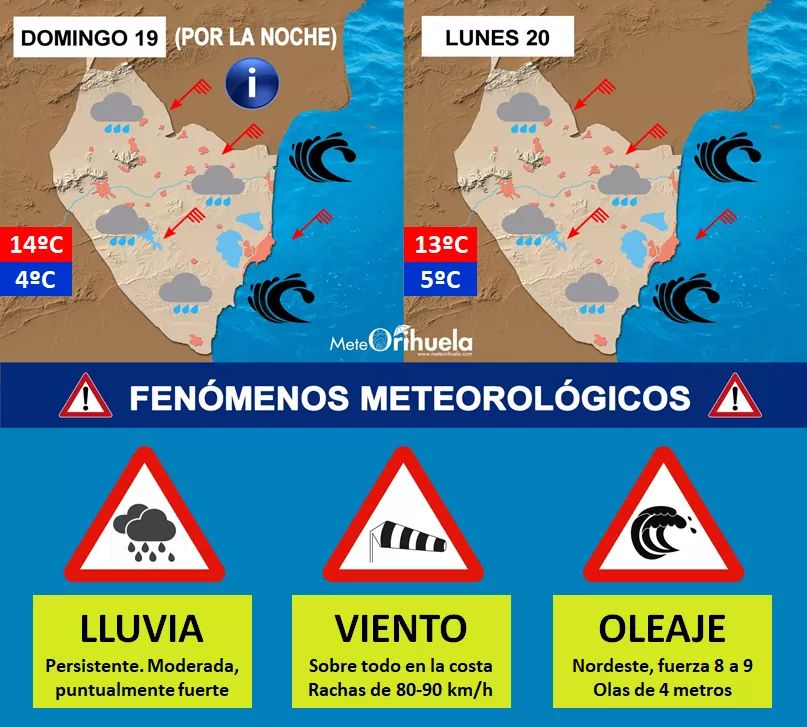 The State Meteorological Agency (Aemet) has raised the warning level for a risk of heavy snow across the interior and the north coast of the province to Red from Sunday at noon.

According to the agency, in these areas there could be as much as 20 centimetres of snow falling in the following 24 hours. For the most part the snow would arrive in areas that are over 600 metres above sea level, although some stretches below that level could have occasional flurries.

The likelihood of this occurring varies between 40 and 70%. The alert extends until Monday in the affected areas.

The warning is accompanied by a second red-level alert on the north coast of the province. In the Baixa Marina and the Marina Alta, waves of seven or eight metres are expected, which could have a cause damage to promenades and northeast-facing coastlines. Again the likelihood is between 40 and 70%.

On the coast of l’Alacantí, Baix Vinalopó and the Vega Baja, the warning for high waves is put at an orange level with waves ranging at a height from four to six meters. In these areas intense precipitation is also expected, but in the form of rain.

Added to this is another orange wind alert which affects the entire province. Gusts are expected to reach 90 kilometres per hour. As for temperatures, they will decrease significantly from those experienced on Saturday.

After the publication of the red notice by the Aemet, the Laboratory of Climatology of the University of Alicante (UA) has warned through social networks of the possibility that the snow will falls in the form of a storm, however they also say that there is a lot of uncertainty about the level above which it will snow.

Rainfall along and inland from the northern coast could reach 100 litres per square meter, either in the form of snow or rain.

Although there will be rainfall in the south of the region it is expected to be much lighter.