Don’t get too excited if you live in the Vega Baja because, although the AP-7 between Tarragona and Alicante became toll free at midnight on 31 December after 48 years, along which motorist will now make a saving of €46, payment will still be necessary along the stretches from Alicante to La Zenia and Cartagena to Vera for up to another 28 years, until 2048 when the present concession eventually expires.

Tolls have also be removed from the stretch of the AP-4 between Seville and Cádiz, a 94-kilometre stretch that links both Andalusian provinces and the AP-7 between Tarragona and the French border will become free from 2021.

“This has never happened in Spain before, removing the tolls on a highway, it is the first time this has happened and it marks an important milestone and opens a new future for infrastructure and high-capacity roads in Spain,”said the minister José Luis Ábalos . 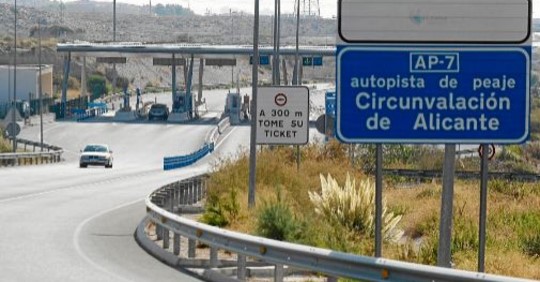 As a result of the removal of the tolls the Ministry of Public Works says that it expects traffic on the free part of the AP-7 to increase by at least 30 per cent. However not everybody is happy with the measure with many restaurants and service stations along the adjacent N-332 saying that the decision will force many of them into bankruptcy as that anticipate the loss of custom with a sizeable number of drivers moving their journeys from the National road and onto the Motorway.

A spokesman for HOSBEC, the Hospitality Business Association of Benidorm, Costa Blanca and Valencian Community, and the biggest defender of the status quo, says that his group is also unhappy with the removal of tolls as the move will see thousands of larger vehicles also moving their journeys off the National roads and onto the Motorway keeping day trippers and short term holidaymakers away from the area. He described the move as “as a poisoned gift.”