This year there is to be a public lighting of a Menorah at Playa Flamenca.

Chanukah is a Jewish festival that dates back to the year 165 BCE. At that time Jerusalem was ruled by a Syrian king called Antiochus. He looted and damaged the Temple in Jerusalem and stopped the Jews from practicing their laws and religion. This upset the Jews so much that they rebelled.

The rebellion was successful and the Temple was restored to its former state. A new altar was consecrated but there was only enough oil for the altar lamp to burn for one day. However the lamp burnt for eight days and a miracle was declared by the Jewish leaders. 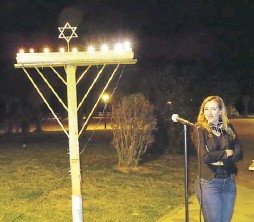 To celebrate this miracle an eight-day observance is created ever year by lighting one candle each day in a Menorah (a special candelabra) until all eight candles are burning. The Menorah is placed in public places to remind people of the miracle.

This year the Southern Costa Blanca Jewish Community will be lighting the Menorah on the steps of the amphitheatre opposite the Lobster Restaurant at Playa Flamenca Beach at 7.30pm on Sunday 29th. December. Following the lighting ceremony we shall be serving wine and do-nuts.

Please join us as everybody is welcome, Jews, Christians, people of every religion and those of none.

You Can’t Be Serious – The Home-alone Husband …