Over 55,000 people marched through the streets of Cartagena on Wednesday, in one of the largest demonstrations that has ever taken place in the city, as they demanded that the government take urgent and definitive measures to combat the pollution in the Mar Menor.

“We don’t want a dead sea,” cried one group of protesters as they marched down a crowded Paseo de Alfonso XIII, where even the pavements were crammed with protesters.

It was half past seven in the evening when the head of the march arrived at the gates of the Regional Assembly in a tidal wave of indignation. “Hoga, hoga, hoga, the Mar Menor drowns,” chanted many of the demonstrators; “There can be no deal with nitrates,” some shouted loudly, while a batucada sounded in the background; “Carelessness, corruption, resignation,” they displayed on one large banner, to the rhythm of whistles and the beat of drums. 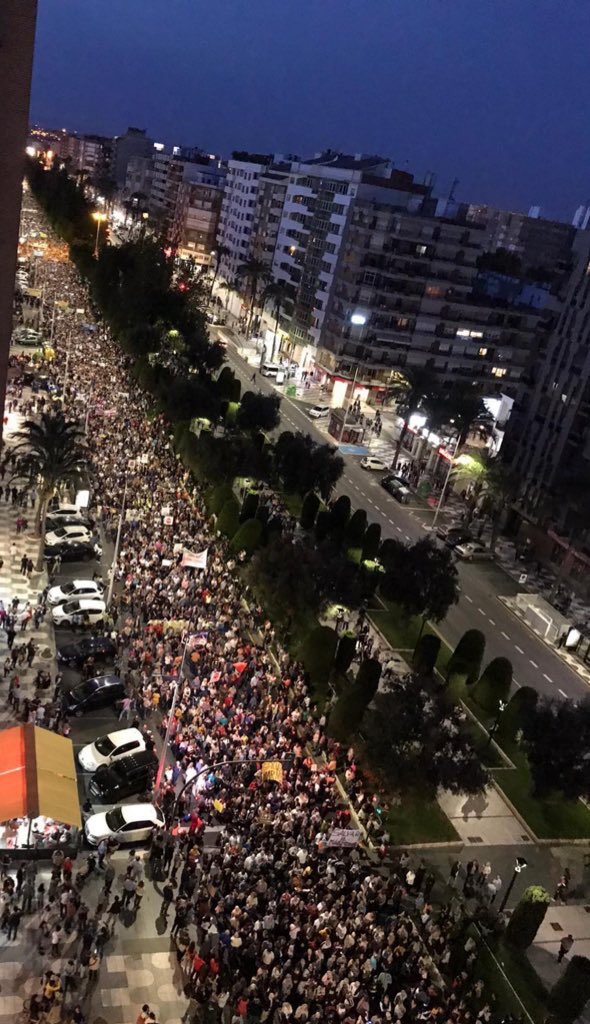 A combination of feelings and motives have gathered in recent weeks by environmental organisations, neighborhood associations, professional groups and ordinary people, following the death of thousands of fish and crustaceans in the new ‘green soup’ that has been caused by nitrate spills and phosphates, many of which were prominently displayed by the thousands of people taking part in the march.

The walk to “save now” the lagoon had been arranged prior to the recent deterioration of the bay by the Federation of Associations of Neighbors of Cartagena (Favcac), with the support of the Association of Southeast Naturalists (Anse), Ecologists in Action, the Brotherhood of Fishermen of San Pedro del Pinatar and the Pacto platform for the Mar Menor.

But the environmental degeneration of the lagoon, and the resulting economic and social effects, further fuelled the mobilisation, supplemented by protesters arriving on many dozens of coaches from all over Cartagena and other municipalities across the Region. Added to these were groups such as Greenpeace and the Pro Soterramiento Platform in Murcia, along with the Platform of People Affected by the Metals of the Sierra Minera de Cartagena. 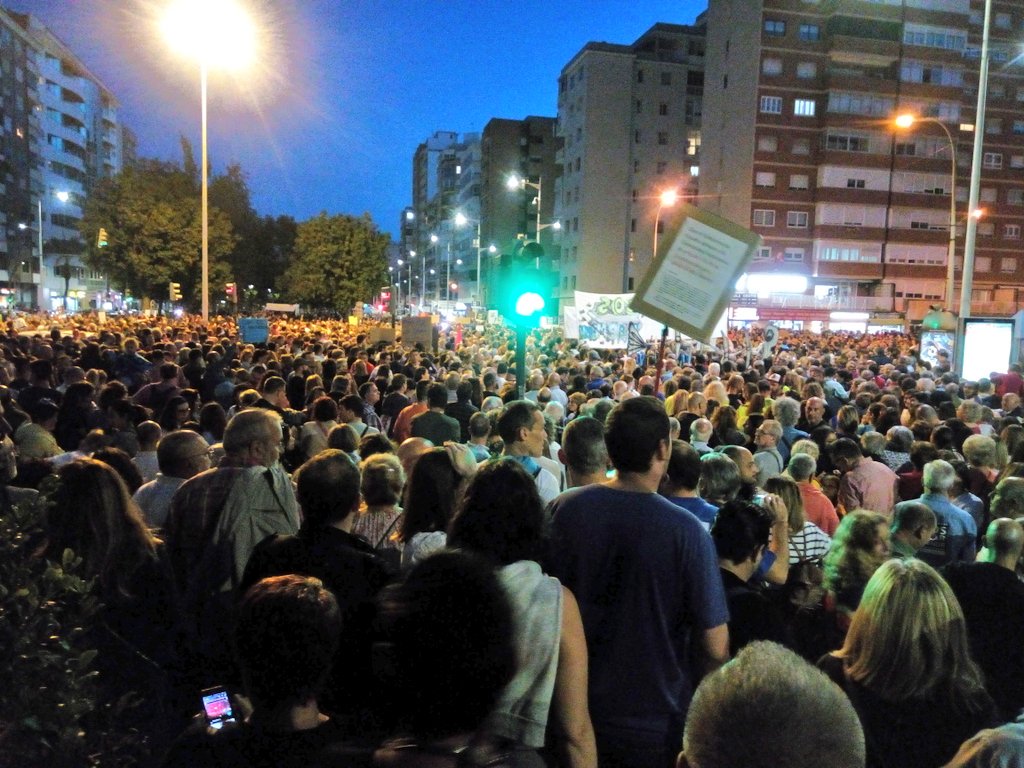 At the head of the demonstration were the president of the Federation, Leandro Sánchez; Pact spokeswoman Celia Martínez; and the director of ANSE, Pedro García.

As they stood in front of the Parliament building a statement was read out by Martínez, Sonia Vera, and Irene Liarte, in which they charged the management of the regional government and the Segura Hydrographic Confederation (CHS), demanding unity as well as urgent and definitive measures be taken. As they called for action the Local author Maria Dueñas said “There has been an attitude of denial towards the obvious; We cannot let the Mar Menor become a horrible landfill. May the appeals of this afternoon not be forgotten”.

Popular entertainer and singer Alejandro Sanz joined in the protest saying “The Mar Menor shouts and thousands of souls respond: #SOSMarMenor. All my support to Cartagena and the people who have joined in search of a solution,” while Radio Presenter Tony Aguilar added “55,000 people are shouting #SOSMarMenor in Cartagena. We have had enough of the spills that have been allowed to take place without any control. Save our jewel of nature.” 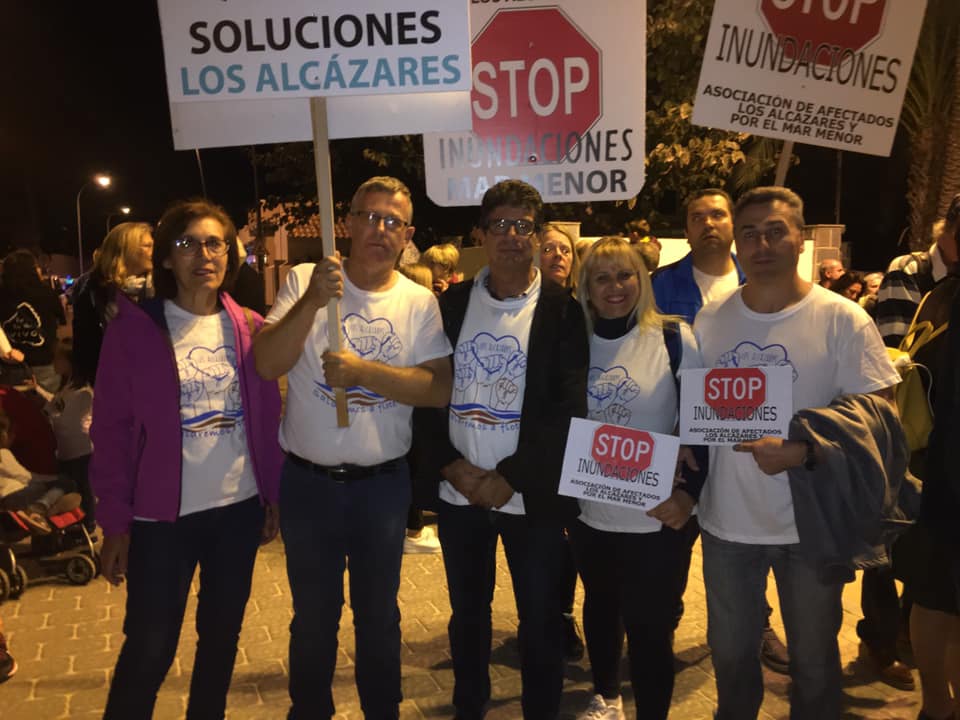 There was also a large number of politicians hidden among the protesters, although they chose to mingle with the masses rather than take prominent positions at the head of the march. They included the Minister of Agriculture and Environment, Antonio Luengo, and the Minister of Health, Manuel Villegas, and the former Minister of Environment Elvira Rodríguez. Next to them were the mayors of San Javier and San Pedro del Pinatar, José Miguel Luengo and Visitación Martínez respectively.

In another part of the crowd was the regional vice president, Isabel Franco (Cs); the mayor of Cartagena, Ana Belén Castejón, and the mayor of Los Alcázares, socialist Mario Cervera, as well as the former Minister of the Environment Cristina Narbona and the general secretary of the PSRM, Diego Conesa. The only political group not represented was Vox, because, according to party sources, the party “has not positioned itself” on the subject.