England full back Kieran Trippier seems to be winning over the fans of his new club Atletico Madrid. Not only is he performing well on the pitch he is also interacting with the fans during and after the games.

In Saturday’s draw against Celta Vigo, as he was waiting to take a corner during a break in play, he gestured to a ball boy that he wanted a drink of water.

An eager supporter shouted to get his attention as he brandished a bottle which he then threw at a grateful Trippier, who took a hearty swig from it. He then delighted the crowd even more by tossing the bottle back to the supporter. 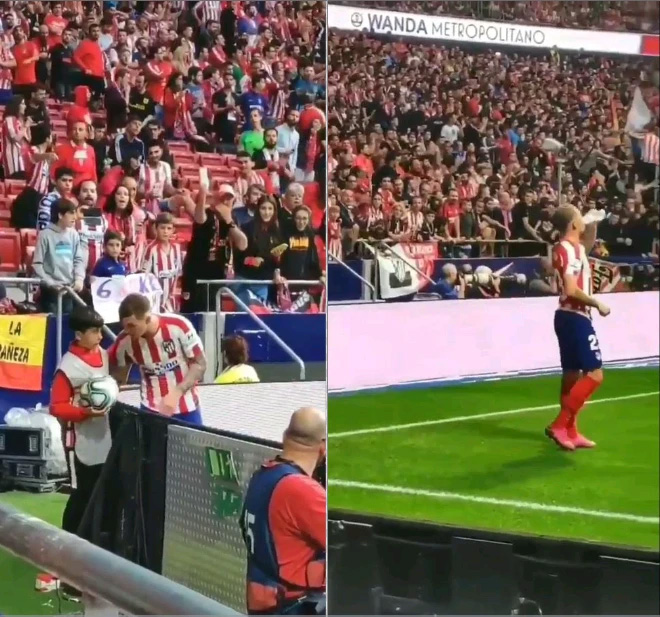 And people on Twitter were equally in love with the interaction, with one revealing that Trippier had gone back to the fan after the full-time whistle to say thank you and give him his shirt.

Another said: “I love stuff like this. That regular guy – human connection to the fans and the fan being quick enough to grab a water bottle for him. That fan is going to remember that day!”

A third added: (it’s) just the latest example of what a connection he has with fans. (Trippier) is one of the best things that has happened to Atleti this season.

It is gestures such as this that has made the right-back, 29, such an instant hit in Spain following his cut-price move from Tottenham during the summer.

The England star was also the most creative player in the Champions League last week, laying on seven chances, including the equaliser, for Atletico’s 2-2 draw against Juventus.

And off the pitch he is already embracing the culture in La Liga, by revealing that he’s taking Spanish lessons three times a week.

Train surrounded by flames in Valencia – at least 20 injured