The torrential rains that hit the Vega Baja last Thursday have already claimed six lives as well as resulting in the evacuation of at least 3,500 people. The Segura River has burst its banks at several points causing catastrophic damage to everything in its path.

More than eighty roads were closed, eleven of them on the main network including the AP7 motorway in Pilar de la Horadada from which four workmen had to be rescued after being trapped inside the tunnel by rising water.

Related: Biggest Gota Fria to hit Spain in a Century

Rail traffic was also affected along many different sections of the Murcia and the Valencian Community network, and several ports in the region also suffered damage. Murcia airport was closed all day on Friday causing about a dozen diversions and cancellations. 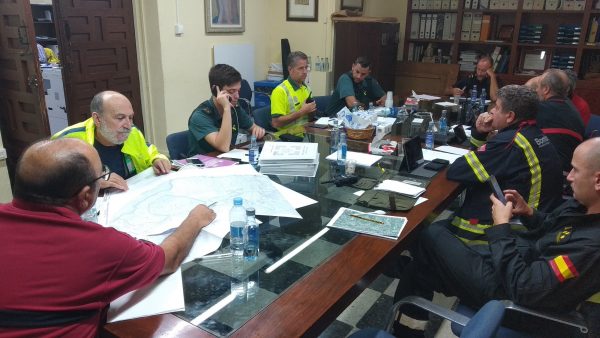 The State Meteorological Agency said that it had to go back to October 1879, 140 years ago, to find a similar comparison, with a storm that had such a devastating effect on the Vega Baja.

In Orihuela, rainfall exceeded 400 litres per square meter in just 48 hours, but the floods also covered large areas of Murcia, Alicante, Valencia and Almeria, where many rescue missions were conducted by the emergency services.

After the death of a brother and sister on Thursday in Caudete (Albacete) when the vehicle in which they were traveling was overturned and dragged away by the current the body of a man was also found dead, having attempted to drive his car through a flooded tunnel in Almeria. 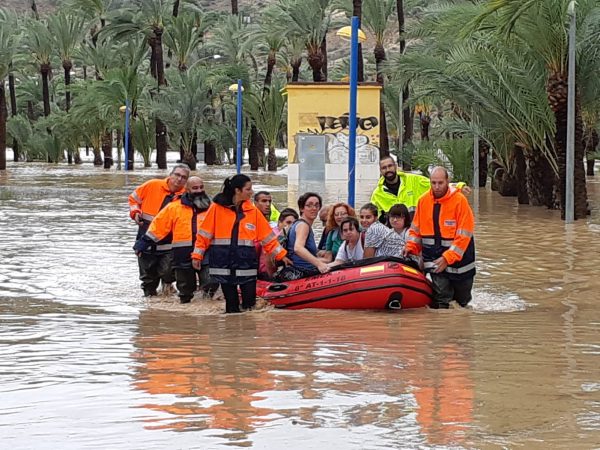 Late on Friday, the Civil Guard found the body of a 58-year-old man in an area of ​​Orihuela that had been flooded by the overflow of the Segura River. First signs indicated that he had been dragged down a road by the water as he was trying to cross the street, having just parked his car.

The fifth victim was in Redovan, a man having earlier left his home on foot and then on Saturday the body of a 40 year old man from the Oriolana hamlet of La Matanza was recovered by the military.

On Saturday Pedro Sánchez, visited Orihuela and Los Alcázares, two of the areas most affected by the floods. Having been welcomed by the mayor, he then spent approximately 10 minutes talking to people who had been affected by the flood. As he departed for a briefing in the Operations Centre he told residents “We will be there.”

Following a situation update by the emergency services and a visit to the old bridge located on the Segura River as it passes through the city, the Prime Minister left Orihuela for Los Alcazares where he said that the government “will not spare any kind of material or human resources to respond to the effects of the Gota Fria”, which he described as an “extraordinary meteorological phenomenon”.

The mayor of Los Alcázares, Mario Cervera, which suffered a severe flood in December 2016, said that the town “needs a solution” to stop being the “funnel of the Region.” “You cannot continue this fear,” he said before requesting works to avoid similar situations in the future.

With almost the whole of Los Alcázares under water the flooding is far worse than three years ago. Residents say that they are absolute furious that in the intervening 3 years there has been no significant action taken to prevent a repeat of the damage caused in 2016.

Torre Pacheco was also cut off as almost all of the roads around the town disappeared under floodwater. Fortunately, most of the residents were aware of the danger and remained in their homes.

Many streets in San Javier were also flooded while residents of La Manga Caravanning Park and some parts of Los Nietos and Bella Bahia were evacuated by the emergency services.

In Almoradi the City Council asked the Generalitat for heavy machinery and explosives to shore up breaks in the River Segura that, at one point, was dispersing 50 cubic meters of water per second into the town, while in Daya Vieja, the mayor José Vicente Fernández, said that he got tired of calling 112 and he was disgusted that the town received no help. 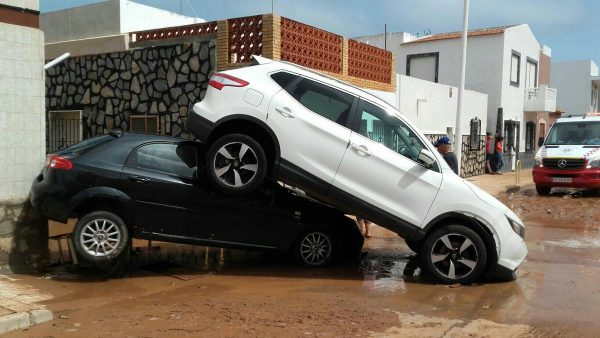 The Vega Baja Hospital was also caught up in the floods, with all scheduled outpatient activity suspended until Monday. Urgent care was, however, maintained.

As well as extensive flooding in the town centre, the Oriol Occupational Centre was closed in Orihuela, due to flooding, and Civil Protection and the Red Cross had to transfer over 40 people to a provisional shelter located in the Virgen de la Puerta School.

In Guardamar a Tornado-twister hit the town on Thursday, damaging the Municipal sports centre, along with felling trees, traffic signs and severely damaging many rooftops. Winds of 104 km/h (64 mph) were recorded.

Over 220 litres of rain per square metre fell on Torrevieja during the early stages of the storm with the urbanisation la Paraíso and the zones of the Plan Parcial Mediterráneo and Villa Amalia amongst the areas worst affected. Dozens of cars had to be abandoned on Thursday and Friday as many roads became impassable. 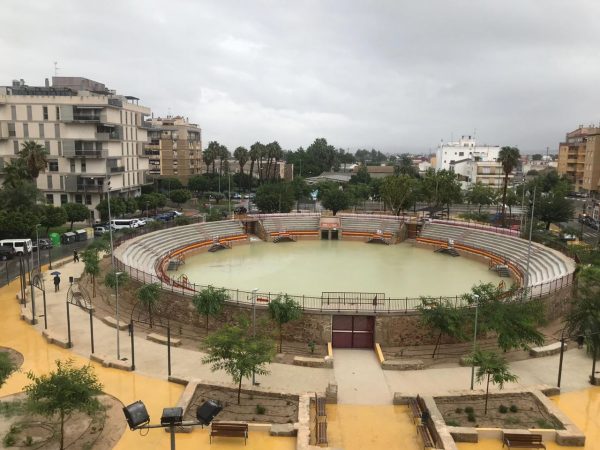 On C/Mar Menor many tower blocks were left without power as the electrical installation caught fire after the flooding. “We have been very afraid, because of the storm and the rains. The same thing always happens every time it rains heavily. In the end, something very serious will happen unless something is done,” said one resident yesterday.

The president of the Consell, Ximo Puig, promised in a statement that “the Consell and the Government of Spain will jointly promote reparation measures to mitigate the effects of the rainstorm on the infrastructure in the region of the Vega Baja”.

The Minister of Territorial Policy, Arcadi Spain, who also went to Orihuela and spoke with Sánchez, said that “The president has expressed his commitment to participate in the repair of the entire region, both from the point of view of infrastructure well as other types of damage that may have occurred in sanitary facilities or in schools”. 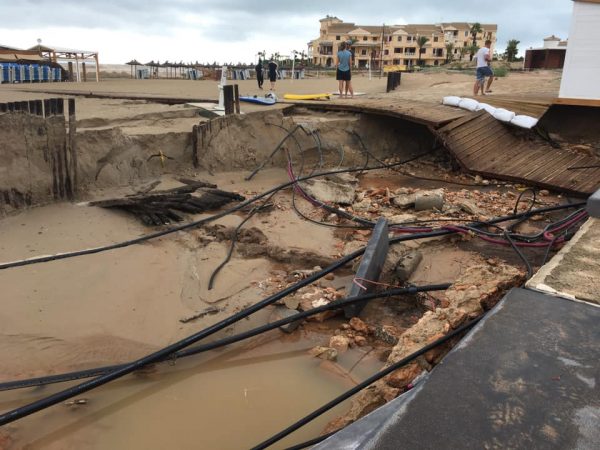 But we have had these verbally-expressed condolences before and whilst the national authorities make plenty of promises at the time they are rarely seen to follow them through. And neither can the local authorities be excused of blame as they continue to cut back on the clearing of the Segura River as well as many other simple and effective measures.

Perhaps now they will realise that the money must finally be made available for the necessary improvements in drainage, sewage disposal and road maintenance. It is only by improving and replacing the archaic infrastructure across the whole region that we can have at least a chance of avoiding a repeat of the weekend’s destruction that has had such a devastating effect on such a large swathe of the local area.