In the Valencian Community the Pacto del Botánico, the partners of the Botanical Pact – PSPV, Compromís and Podem – are narrowly predicted to come out on top and to be able to form a government after the regional elections that will be held next Sunday on 28 April.

So say the results of a survey commissioned by Valencia Plaza a SyM Consulting conducted between 11 and 12 April, indicating that the left bloc would retain its advantage over right-wing parties due to losses suffered by the PP and Ciudadanos, in excess of 10 seats, who would seem to be unable to stem the gains made by Vox in Les Corts.

The party receiving the most votes would be the PSPV-PSOE led by Ximo Puig, with 25.9% of the ballot and a projection of 25-27 seats. This would be a good result for the party, an increase on the 2015 result of five points and between two and four deputies.

The second most voted for party would be Compromis, which could even overtake the Socialists in this final week of the campaign. Thus, the coalition led by Monica Oltra would obtain 23.1% of the support, also five points above their 2015 result and with a projection of 22-24 seats, between three and five more than the last elections.

So, according to poll, in a government that has 99 seats, the PSPV-PSOE and Compromis forces could actually achieve the 50 deputies that would give them the majority in Les Corts without the need to call on the support of the third progressive force, Unides Podem.

Indeed support for the alliance of the formation of Pablo Iglesia s and Izquierda Unida would achieve only eight deputies and 7.5% of the votes, a result well below that gained in 2015 (13 seats and 11.2%).

Meanwhile, in the block of the parties on the right there is also likely to be movement but it seems to be limited to a new distribution of representation among existing forces. The PP would suffer a resounding fall, losing ten seats (from 31 to 21) and about eight points less compared to the previous elections. Ciudadanos also drops by five points and to between 6 and 8 seats, well below the 13 achieved in 2015.

The great beneficiary of this loss of representation of the PP and Cs would be Vox, which would break into Les Corts with 14.4% support and 14 deputies, a figure very similar to the total of the losses expected to be suffered by the PP and Ciudadanos.

So the arrival onto the scene of Vox would not change the configuration of this legislature. The left would be far superior, with a total of between 56 and 59 seats, well above the absolute majority required, while the right would only achieve between 41 and 43 seats. 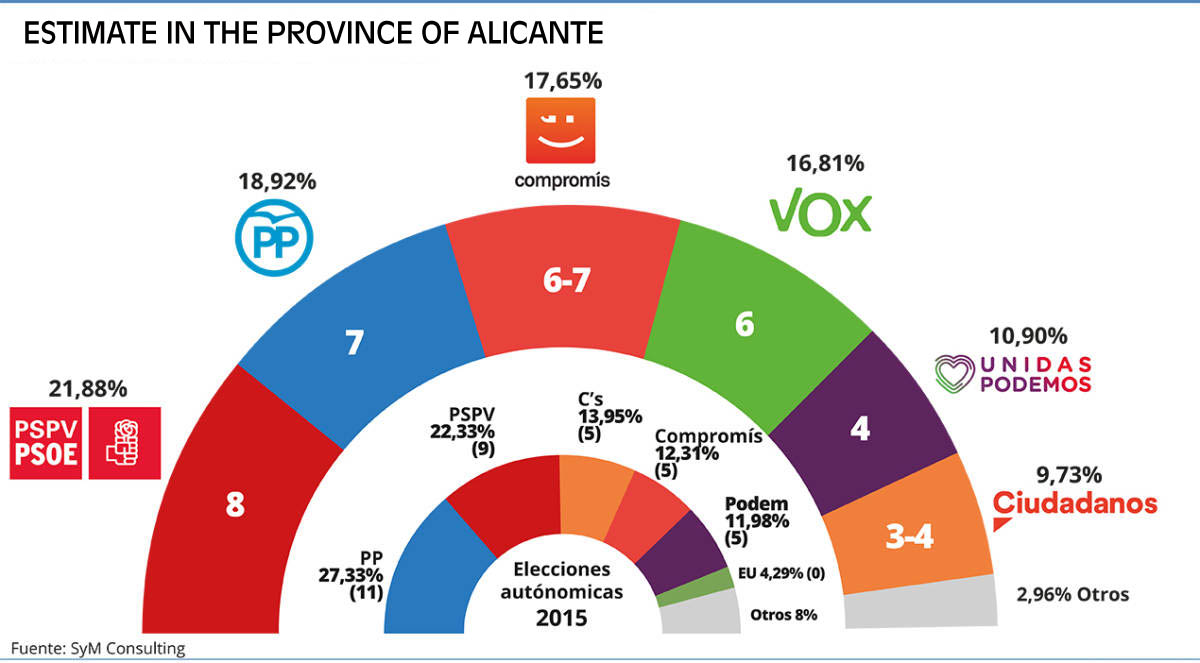 Voting in the province of Alicante would be rather more even, where the left bloc would get 18 or 19 seats compared to 16 or 17 on the right.

The PSPV would achieve the most votes with eight seats, followed by the PP with seven, Compromís with 6-7 and Vox with six.

This scenario reflects an equal fight in the province from which United Podem would realise four representatives and Ciudadanos between three and four.