Despite the problems faced by Spain’s ruling conservatives in Madrid following the resignation of the regional premier Cristina Cifuentes over a scandal involving a dubious master’s degree and a shoplifting incident caught on security camera, Prime Minister Rayoy gave a muscular performance in Alicante on Saturday.

At a packed meeting of almost 1600 party faithful, which took place in the Provincial Auditorium of Alicante (ADDA), the Prime Minister launched an offensive against the linguistic policy of the Consell, as he opened the the electoral battle in the race toward the municipal and regional elections next year. 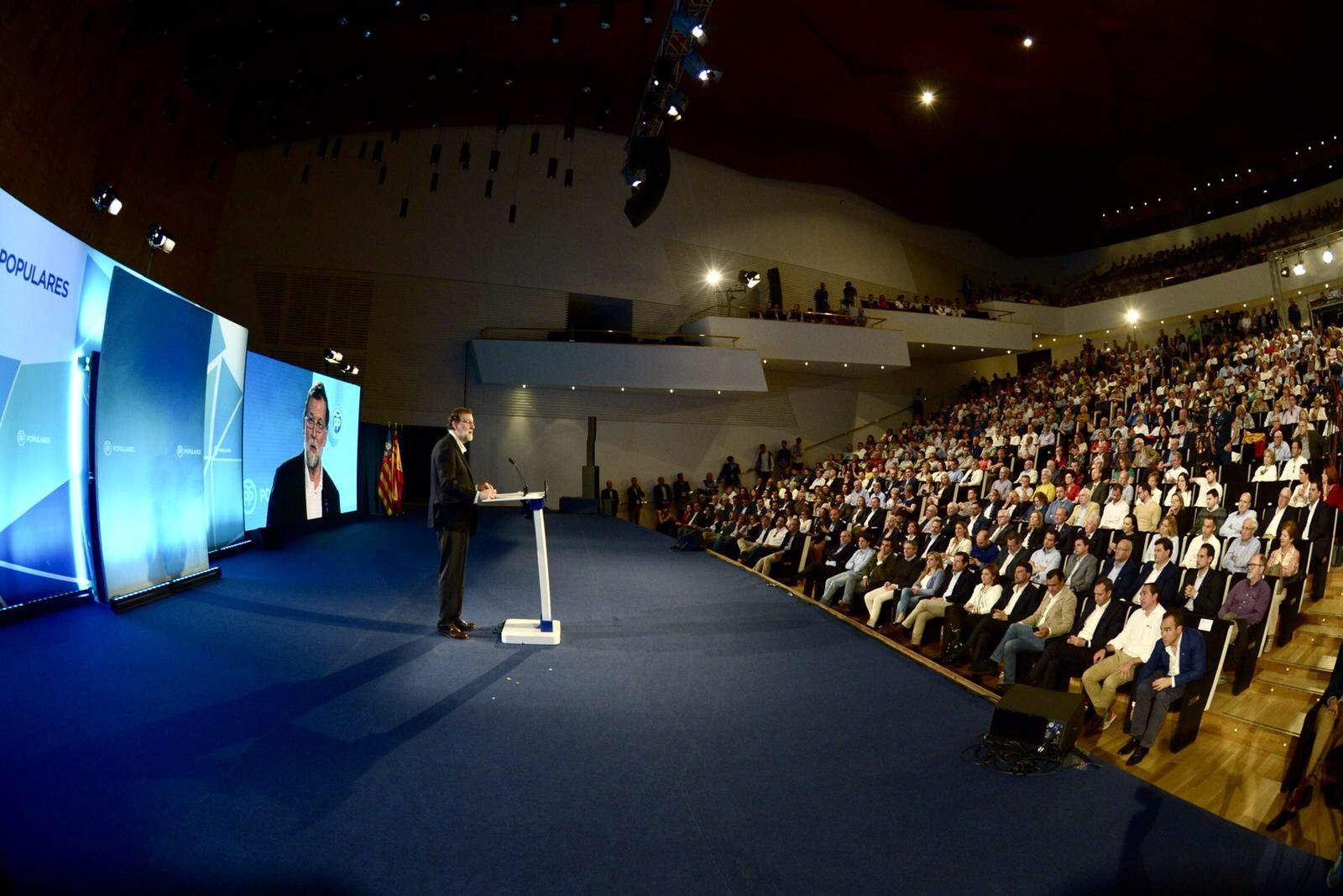 He said that one major issue was the fundamental reason for organising the event in Alicante, a city that he hadn’t visited for over five years, that he wanted to give his backing to the new mayor of the city, Luis Barcala, and at the same time provide his support to the electoral axis on which the campaign of the PP in the province will pivot: the attack on the educational policy of the Consell, as it continues both to stir up the linguistic conflict and compare the situation of the Community with that of Catalonia.

The rally, which started with a tribute to the victims of ETA after the dissolution of the terrorist organisation, completely filled the ADDA and provided the local party an opportunity to take what will be the official photo of the PP in Alicante during the elections next year, where Mariano Rajoy was flanked by the two candidates for the presidency of the Generalitat and the office of the Alicante Mayor, the autonomic president of the PP, Isabel Bonig, and the new city mayor, Luis Barcala.

In his speech, Rajoy announced that his government will raise an unconstitutionality appeal against the new Plurilingualism Law of the Generalitat, the mandatory introduction of the Valencian language into government and education, if there is no agreement with the bilateral commission, which has already been convened.

The announcement, which opens another front between the Consell and the Government, was supported by Isabel Bonig, who said in her speech that those who govern the Community “want to confront and divide our society” in a clear reference to the politics of the Conseller of Education, Vicent Marzá, of Compromís.

Rajoy said “This government will consider the unconstitutionality of the Law if it does not respect the legality and the right of parents to choose a school and a language for the education of their children. We want to talk before resorting to the legal process, but nobody should be deceived.” He said that the Government does not intend to accept neither impositions nor discriminations,” because Castilian and Valencian are co-official languages.

“The last thing that the Valencian Community needs is to follow the example of division, confrontation and the creation of problems that cause so many difficulties for the Catalans,” he added. “Because that is what the governments of change do, govern a little and divide a lot and, they also create many more problems for the people.”

He added that the new leader and councillors have been “exemplary” in their management and “demonstrate in Alicante that efficiency is a reason to vote for our party. We trust in you and we are going to win control of this city with a majority,” he said, ratifying Barcala’s candidacy.

Without mentioning any of the ongoing corruption cases that plague the PP in the Community and elsewhere, Rajoy did talk about the projects already announced during his visit to El Altet airport, the linking of Alicante with Murcia and Andalusia and the AVE to Castellón. He said that these works in the Mediterranean Corridor are currently “the most important projects in Spain.”