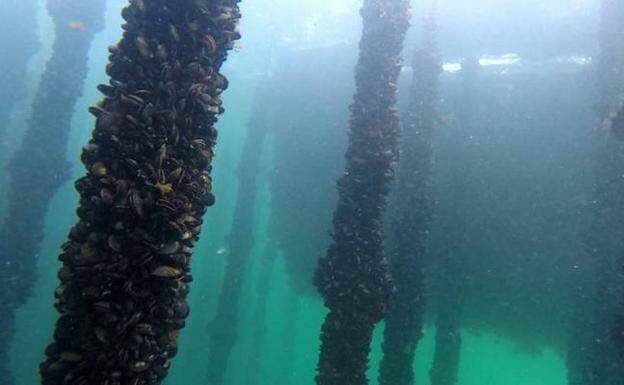 The owner of Clóchinas Navarro oyster farm off the coast of Santa Pola, has been granted environmental authorisation to expand the service of the underwater area of ​​780,000 square metres for the Molluscos Santa Pola operation.

They had proposed the expansion of cultivated species with Mediterranean mussels, and scallops, which are spontaneously captured in the existing structures, as well as allowing the maintenance of sea urchins that are also spontaneously recruited on the farm. The modification of the project, which has required the modification of the Environmental Impact Statement (EIS), will only require adding simple structures of ropes and buoys being the method of cultivation similar to the existing one.

Likewise, an average production of 22 to 24 tons per year is calculated, which would be subtracted from the production of oysters. Various production plans are proposed for the three species that are intended to be cultivated without in any case giving rise to an increase of the 135 tons per year. However, as it is a sensitive area at an environmental level, and with a view to a new report prepared by Red Natura 2000, new conditions were established. Before the start of the activity, the existing infrastructures that are not going to be used will be removed, proceeding to the physical restoration of the affected environment. And above all, different measures for the protection of biodiversity, such as not locating crop lines on sensitive habitats, not cultivating exotic species, not using certain devices that can alter the life of marine mammals or that the farm’s divers do not interact with the bottlenose dolphin

The installation supposes a surface in the form of a rectangle of 1,200 x 650 metres. Suspended long-line system with which the fattening baskets and seed collectors hang. Each line is supported by

Clóchinas Navarro, located in Beniparrell, is the sector leader in the Mediterranean with half of the annual production in the ports of Valencia and Sagunto, and a turnover of around 7 million euro per year.