The tiny islet once known as Illa de Sant Pau (Saint Paul’s Island) and just a few kilometres to the east of Alicante, Santa Pola and Torrevieja, is believed to be where St. Paul disembarked.

Up to the end of the 18th century, it was an island where Barbary pirates found refuge and it was also used as a base for their raids on the Levantine coast.

It’s a short, pleasant cruise, with the Torrevieja boat having a glass bottom so you can view the reefs and sea life as you cross

Tabarca is the smallest inhabited island in Spain. Until 1741 the islet was part of the Republic of Genoa and later conquered by the Bey of Tunis. From 1760, Tabarca was ordered fortified and repopulated by Charles III of Spain. Some shipwrecked Genoese sailors settled there and the islet was renamed Nova Tabarca (New Tabarca). My two travel writer friends and I wandered around the old town and explored the shoreline and ruins.

The island was once fortified with walls, bulwarks, warehouses, a governor’s house, and a barracks. The gateways are still there as are the Governor’s House (now a hotel) and the Church of St. Peter and St. Paul which was built in 1770. Later the garrison was removed and by the end of the 19th century the islet was populated with about 1,000 people, mainly fishermen. Today the population is around fifty, although during the tourist season there are up to 4,000 people a day who arrive as visitors. 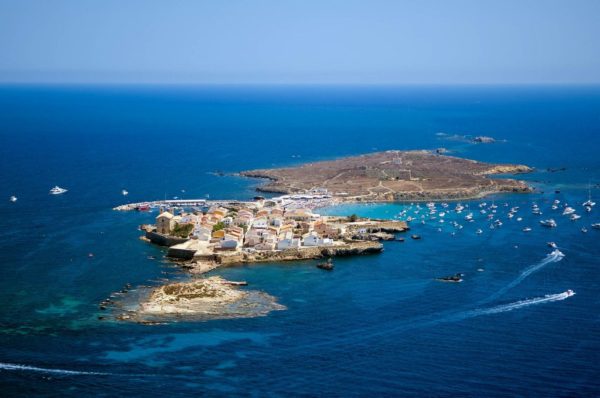 After exploring all the sights around town, you may wish to stop at a restaurant for lunch. The terrace of the Nou Collonet overlooks the sea making it an ideal location for enjoying a delicious meal where the menu includes traditional Spanish cuisine salads, meats, chicken and seafoods. However, the island has several good restaurants and bars as well as hotels for overnight accommodation.

You can also make the short hike across the desolate grassy expanse to the garrison ruins and the old lighthouse at the tip of the islet. The island was formed by volcanic activity and is largely barren with a few cacti and scrubby bushes growing amidst the limestone debris.

Tabarca is a protected marine reserve for seabirds and various marine fauna. The sea around the rocky shoreline is crystal clear and perfect for snorkeling. The marine reserve, Reserva marina de la Isla de Tabarca, is designated a Zone of Special Protection for Birds by the EU. It is the last place in the Spanish Mediterranean where the endangered Mediterranean monk seal was bred before becoming extinct in the 1960s. 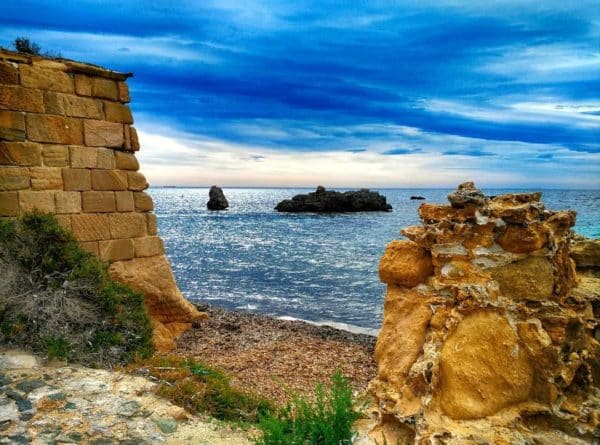 In order to protect the marine area from fishing, an artificial reef was laid near the island. There is now a variety of marine fauna in the clear, unpolluted waters, including sea bass, grouper, conger eels and giltheads.

Today, to visit Tabarca Island is to catch an almost unspoiled glimpse into a Spanish village of the 1950s, with its whitewashed rows of houses, mom and pop businesses and exclusively local cuisine. There are no cars, no banks, no chain stores and no billboards. A few fishing boats still depart the harbour each morning, just before boat after boat of sunbathers arrive to enjoy the gorgeous beaches and pristine waters of the island.

In Tabarca you are guaranteed a most interesting day wandering around the old square and strolling through the narrow streets of the old town. There is also a small museum as well as plenty of ruins to explore, and the scenic boat trip to and from the island is pleasantly relaxing.