After two years in which Holy Week was conditioned by confinements and mobility restrictions due to the health pandemic, 2022 has meant a return to normality, which has been reflected in road trips.

During the ten days that the special traffic operation has lasted (from 3:00 p.m. on April 8 to 11:59 p.m. on Monday, April 18), there have been 15.8 million long-distance trips, a 6% more than those registered in 2019 (14.9 million). This is the highest number of displacements in a special Easter operation since records have been available (2008).

The day with the most long-distance journeys was Sunday, April 17, with 1.7 million journeys.

Regarding border movements, 1.8 million displacements have been registered, which represents an increase of 1.8% compared to the 2019 data.

…AND BIG DATA WAS WRONG

This increase in mobility has been reflected in the accident figures. During Holy Week 2022, there have been 27 fatal road accidents, in which 29 people have died and 96 have been hospitalised, which means 2 more deaths and 30 fewer injuries than in 2019.

“There are still many deaths on the road and there are still many families whose lives have been changed by a road accident. Nothing will be the same again ,” recalled Pere Navarro, director of the DGT after analysing with those responsible for the Observatory of Road Safety the provisional figures for this Holy Week.

However, he wanted to thank the citizens for the behavior that most of them have had on the road. “It is good to know that if we work hard we can avoid the bad forecasts of Big Data” . “We have to continue working every day and complying with traffic regulations so that road accidents truly become a thing of the past”

Analysing the data, a behavior very similar to the accident rate of Easter 2019 is observed: 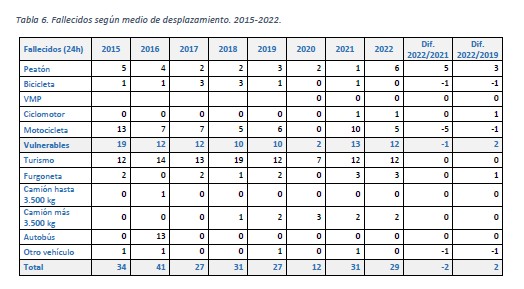