The City of Murcia is on our doorstep with museums, culture and amazing architecture.

If you have ever been on the AP7 near Murcia you cant miss seeing the Monteagudo castle in the distance, sitting tall, proud and majestic on a rocky point 149metres high.

The Castle is a few kilometres from the city. It was built in the 11th-12th century. It is not the castle itself that is impressive but the 14 metre high sculptor of Christ that captures your attention. It is indeed spectacular and grand.  It was only designed by the sculptor Nicolas Martinez in 1951, it replaced previous sculptors that were destroyed in the Civil War.

Recently there have been attempts to take down the sculptor, I am not sure for the reason for this, and it has been taken to the high court, where they have deemed that it is part of the Murcian cultural tradition and a religious symbol so will remain.

You are not able to go in but there is a small free museum explaining all the history of this magnificent place.  Also, it is awe inspiring to see close up. 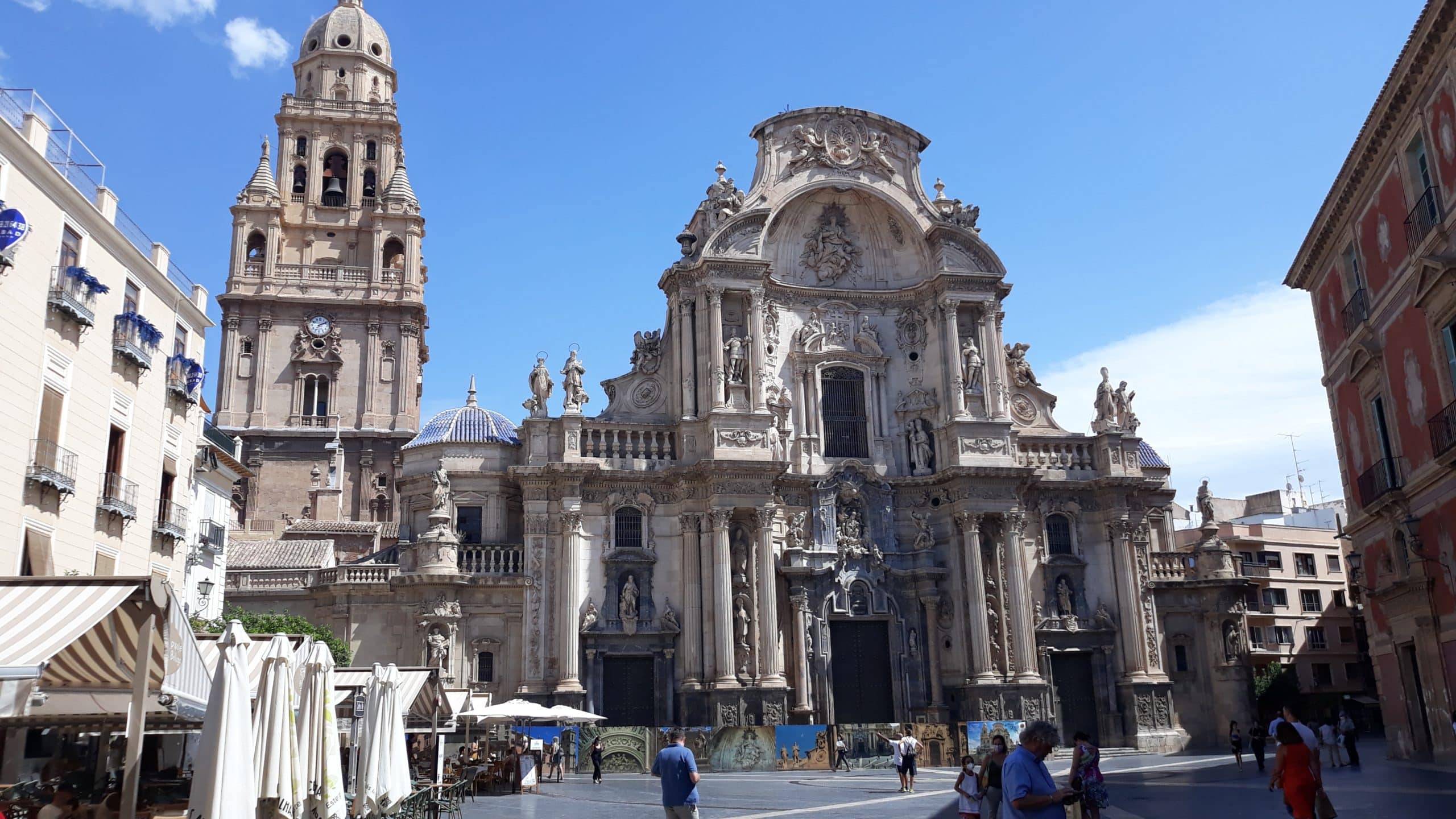 Located in the heart of the old town is the Belluga square. Situated in the square is the imposing Cathedral of Santa Maria 54metres high and has 20 sculptors on its façade which is so elaborate, so ornate and beautiful.

It took 300 years to build it so has a mix of different architectural styles.

It has three entrances, The Door of Apostles is the only one remaining fom the 15th century around 1465-1480. It is built in a Gothic style and has two Apostles either side sculptured into the wall surrounding the huge, impressive doors.

Its bell tower is 93 metres high and is the second tallest in Spain. Built in different stages in time so hence different styles to the parts, Renaissance and Neoclassical styles.

It is possible to go up into the bell tower and saviour the best views over the City of Murcia. I am not a religious person, but the Cathedral is so beautifully built and so interesting to see.  In the oldest part they have placed the museum. You can access the Cathedral, Museum with an audio guide included for 5 euros adults only 4 euros if a senior (over 60)

The inside of the Cathedral suffered a fire in 1854 and parts of it had to be restored. There is a neo-Gothic altarpiece which is huge and so exquisite.

An enormous 0rgan that has 4000 pipes over four floors, it is a masterpiece and of work and is enjoyed by many not just in the Church services but throughout the year they hold many concerts.

Another building of great beauty and interest is the Real Casino, it is not a gambling house but a social and cultural place for holding events and has more than 1500 members. It is close to the cathedral and again only a few euros entrance fee.  Here you can see opulent grandeur at its best. 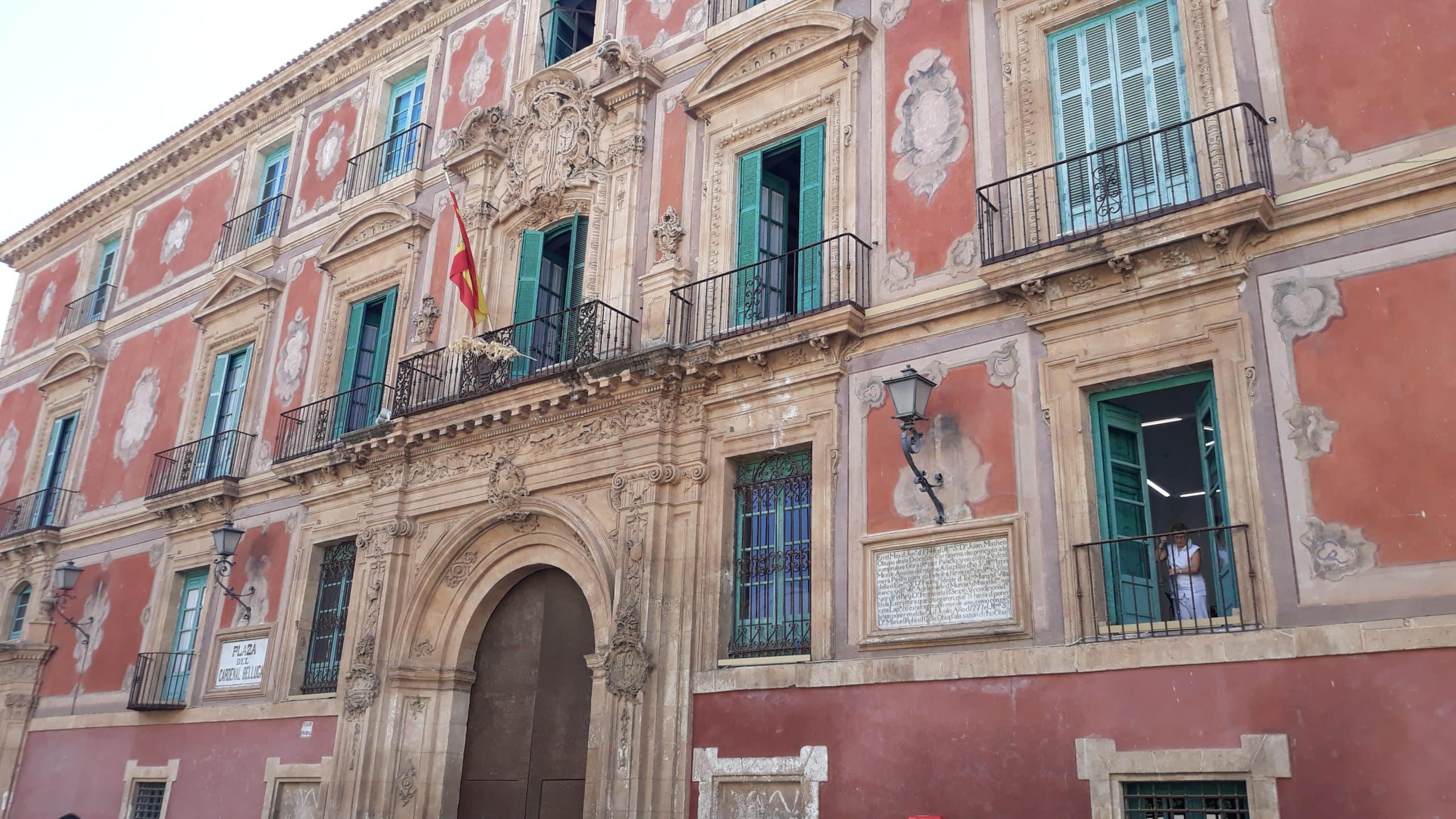 There are many museums Archaeological, science and fine arts.  There is also a Working convent, only part of it is available to visit but it is well worth it. It was built in the 14th century and is yet another beautiful building to explore and wonder at its splendidness.

After viewing the sights maybe chill out in the park, Floridablanca Gardens  it is full of colourful flowerbeds and lots of old Ficus trees. This is the oldest park in the city and a lot of the residents go in the summer to enjoy the shade it provides.

For children and adults there is the zoo Terra Natura Murcia. This Park has a very good humane approach, and all animals are kept in enclosures close to their natural habitat. They focus on the conservation of endangered species from the brown bear to birds and reptiles.

Just six kilometres south of the city is the Carrascoy and el Valle Regional Park. With beautiful, scenic walks.

Murcia has the river Segura running through it providing lovely walks along its banks.

I have lived here for 15 years but I am ashamed to say I have never been into the actual City of Murcia only to the Condomina shopping centre.  Murcia City is lovely, and I plan to go back and stay a night there to finish off my sightseeing and to be able to dinner in one of the many fabulous restaurants.