BENIDORM has had production companies processing permits to shoot on beaches, and in the city, amid easing of COVID-19 restrictions.

Since Benidorm reactivated the audiovisual activity, managed through the Benidorm Film Office (BFO) at the start of phase 1 of the coronovirus lockdown de-escalation, several producers have requested information and authorisations to film. Production of the feature film ‘Ama’, saw filming halted on Levante beach, due to the state of alarm was decreed on March 13.

Mayor, Toni Pérez, said: “In January, we were marking the best start to the audiovisual year, since the BFO was launched, with innumerable projects of national and international importance and significance.

“Some of which were affected by the decree of the state of alarm and had to be temporarily suspended by the Covid-19 health crisis. “However, we are convinced that Benidorm will continue to be a pole of attraction for production companies, now that audiovisual activity is reactivated.”

A reactivation that we are always articulating under the premise of guaranteeing health security .

“The BFO is moving to production companies and companies interested in working in the city, with the existence of a manual for safe filming prepared by the Institute of Cinematography and Audiovisual Arts (ICAA).

“With the participation of the sector, including the Film Commission and Film Office, and which has been endorsed by the National Institute for Safety and Health at Work (INSST), said Mayor Perez. Prior to authorising filming it will be required to have an affidavit, stating that they are informed of the recommended measures for the development of their work. 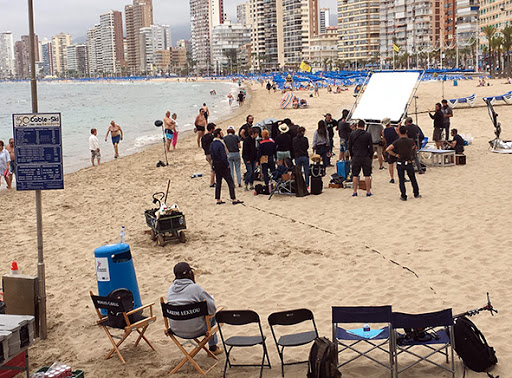 In phase 1, the authorisations making recordings or photography sessions in public spaces, depends on the City Councils, as established by Order SND/399/2020 of the Ministry of Health.

With regards to recording on the beaches, authorisations are transferred to the Alicante Coastal sub-delegation.

The human resources are managed directly from the City Council, in conjunction of communications with the Local Police.

The beaches are one of the most demanded locations for the productions that Benidorm is chosen for their projects. Since January all projects that have passed through the city have carried out sequences on the beaches.

Filming includes the fashion report for the Bershka brand, recently released; the feature films ‘Nieva en Benidorm’ by Isabel Coixet and ‘El Cover’ by Secun de la Rosa;and the ‘Benidorm’ series that Atresmedia has announced to air on June 7.

Benidorm beaches are in constant demand, evident during the state of alarm, with direct/live programmes information being constantly broadcast throughout Spain and abroad.

Actor Michael Garry, who has appeared in Peaky Blinders, Coronation Street and Emmerdale, said: “It’s pretty much been shut down since March, with countless productions unfinished.”

Michael, who annually spends a vacation in Benidorm, said: “I believe Coronation Street are making tentative steps to begin soon, though I don’t know of any availabilities as yet from fellow supporting artistes (extras).

Filming returned for Emmerdale in May and Michael said: “As soon as restrictions are lifted I can see a flurry of availabilities for particularly the period dramas, so lucrative in the export market to the USA. “I’ll be able to expand on specific productions as soon as the ‘all clear’ comes.”

THE OASIS BAR and RESTAURANT La Herrada, Los Montesinos re-opened May 12. Opening hours: 10am until close. Food available, from BREAKFAST 10am, through until 1pm. Afternoon SNACKS available.

EVENING menu from 6pm. Terrace tables only to eat here.  TAKEAWAY available everyday and DELIVERY, only on Wednesday and Friday evening or SUNDAY lunch. Please pre-order deliveries and takeaways. To order please WhatsApp 645409436 or Telephone +44 77138 5537.