TWO passenger aircraft with approaching 300 people on board were involved in what could have been disastrous in a ‘near miss’ collision over Spain.

The Wizz Air bus 320 was desending into the flight path of the Air Europa Embraer ERJ 190, that lead to emergency action being taken, to avoid a collision.

Details of the incident, that occurred in 2019, have been released after a formal investigation was concluded.

In June 2013, Wizz Air Flight 3141, an Airbus A320-232, made an emergency landing at Leonardo da Vinci-Fiumicino Airport, when the crew encountered problems lowering one of the main undercarriages and locking it into position.

The aircraft diverted to Fiumicino and firefighters applied foam after landing as a precautionary measure. The aircraft was evacuated using slides.

Wizz Air was established in September 2003 with Headquarters based in Hungary. Wizz Air began trading on the London stock exchange in 2015. In 2017, Wizz Air announced the launch of a British division, Wizz Air UK, based at Luton. 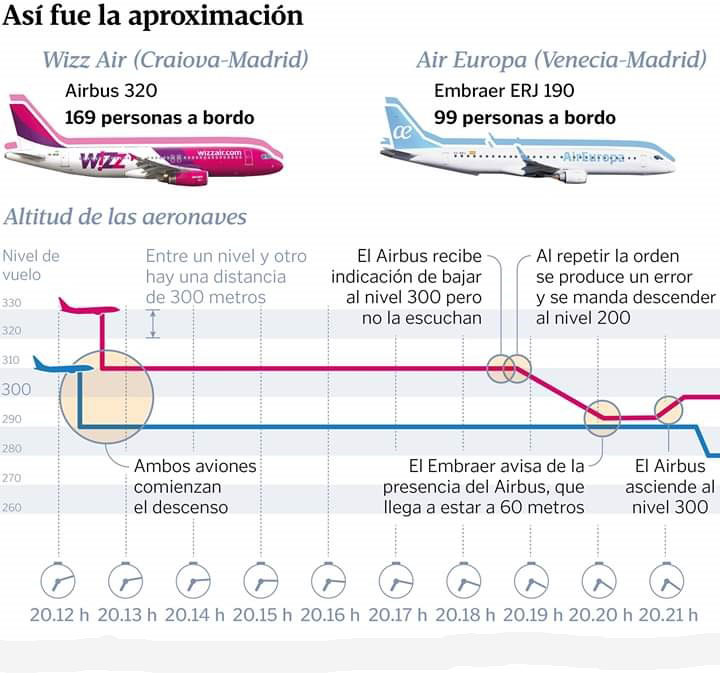 The airline applied to the CAA for an AOC and Operating Licence, using British registered aircraft.

In November 2018, it was reported Wizz Air had plans to reactivate its Wizz Air Ukraine subsidiary, approximately three years after it was closed.

Under the plan, Wizz Air Ukraine seeked to complete certification in 2019, following the acquisition of twenty A320/321 neo jets, with bases developed in Kyiv and other cities across the country.

By 2025, Wizz Air aims to have a passenger throughput of 6 million passengers per annum.