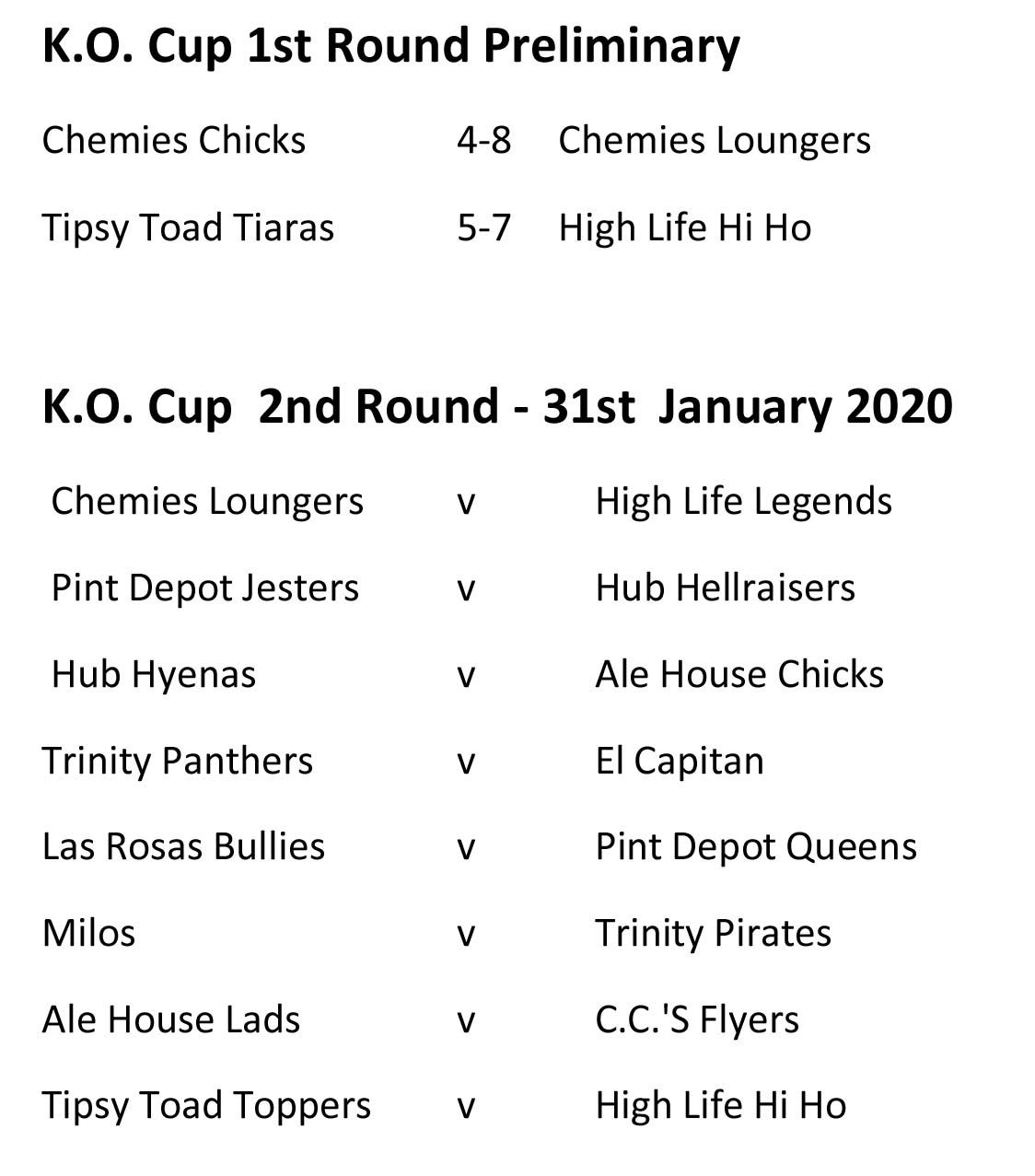 Difficult to tell who was who down at Chemies Lounge for this Chicks versus Loungers Halloween cup tie. Both teams are to be congratulated on making the effort in dressing in some outlandish gear, no one coming as a dart player, but many playing like one. Surprisingly efforts to find the parents / grandparents of the small child present were fruitless, does anyone recognise him / her from the photo.

The match opened with a ton from Graham White and completed by the same player on D10, the Chick witches seemingly incapable of finding any rhythm, presumably suffering from air sickness. This, however, was immediately rectified by Hennie Oortwijn on D4, despite a ton from Billy Dolling plus the courtesy of at least a hundred missed double darts from team mates, Mark ” The Clown ” Sommerville and Sandy Coutts.

The Loungers retrieved the lead in the third, Mike Tierney 100 and the reliable Tony Spiers completing the 701 on D16. The first two pairs went the way of the boys, skipper Jimmy McKay D5 converting the first, left hander Dolling managing a ton plus the all-important double, partner Tierney contributing a 140 for the second.

Spiers and Coutts must have expected to take the sixth leg after the former whacked in a tasty 132 set up. Oortwijn and Nikkie Dean had other ideas, the latter completing the 601 on S16, D18, for a 4-2 half time score. A dodgy concoction of spells and brew were consumed in the break, the Loungers even less coherent than usual after the intermission and decidedly unsteady.

Dolling managed to keep his composure nailing D6 for 5-2. Kerry Shopland slotted home D15 to maintain the Chicks challenge. Andrea Kelly looked likely to topple the Loungers captain with an impressive 117, the Loungers response, D2 for 6-3. White had the difficult task of match leg against an in form Oortwijn, just edging out the Chick on D3 for the result.

Winnie McKay put in a “spirited“ performance versus MOTM Tierney 100, but it wasn’t sufficient as the Lounger finished the 501 on D9. Collins completed the twelfth leg on D12, despite a ton from Spiers, Nikki Dean was the Chicks MOTM.

A pretty decent inter league match took place at C.C.’s when they hosted the Bullies from San Miguel. The hosts were 5-1 up at half time, the visitors only success via Adrian Buitekaht 120, 150, D16. A bull finish from Gail Murray made it 6 for the Flyers, Dougie Adkins winning the match on D8. Richard Pattinson was C.C.’s MOTM.

The Tipsy Toad Tiaras or more appropriately ‘Traumas’ flew into the Hi Life atop their broomsticks for the Team KO preliminary round play-offs and some Halloween hijinks.

A fresh injury this week saw a broken-armed Sharon Marshall playing with her left hand, joining the ranks of orthopaedic ‘orrors that have befallen the ladies propping up the bottom of Division 1.

Things started off quite well in the triples with the tiaras advancing to a 2 – 0 lead curtesy of Lesley Eagle’s D9 and then Pat Schofield’s 133 and D20 check-out.  Young Charlie Pritchett hit D8 for the Hi Ho’s to take the 3rd.  He also took the first pairs leg on D10 with partner Michael Leblond scoring well to get him there.

Sonya Cooper and the lucky locksmith Paul took the 2nd pairs legs with a nifty D2.  It was 3 apiece at half time thanks a 140 from Lesley Eagles and ultimately to Patty Poo’s D4.  After some fried delights the Tiaras took the lead again with Captain de Lacy’s D2 thwarting Colin S’s great scoring including a 134.

The next 3 legs then went to the Hi Ho’s bringing them to the brink of victory with just 2 legs to go.  Elizabeth Cowan brought the Tiaras back in to contention taking the 5th singles leaving it to do or die Wendy Hayward to try and get us to a draw.  Captain Jane Leblond was having none of that and scored consistently on the 19’s to take her ahead, checking out in 3 darts 10-15-D20 and earning her Man of the Match.

The format for Division 1 league matches from and including December 5th has now changed after consultation with all captains. Pairs currently played best of three 601 will now be one leg 601. This date determined is the half way stage. Triples (one leg) and singles (best of three ) remain the same.

With no objections throughout, games are now anticipated to conclude one hour earlier. NB games must commence by 8-30pm, however, by mutual agreement an earlier start time is an option. Games should now finish by around 11-00pm.

A few remaining slots are available for the ” Gota Fria Appeal ” mixed pairs tournament this coming Saturday 9th at the New Tavern, San Miguel. Players without a partner are welcome as a blind draw will take place on the day. Registration is 2-00pm start time aprox 3-00pm.

Winners and runners up will receive prizes, the event played on four boards at the excellent Tavern venue.