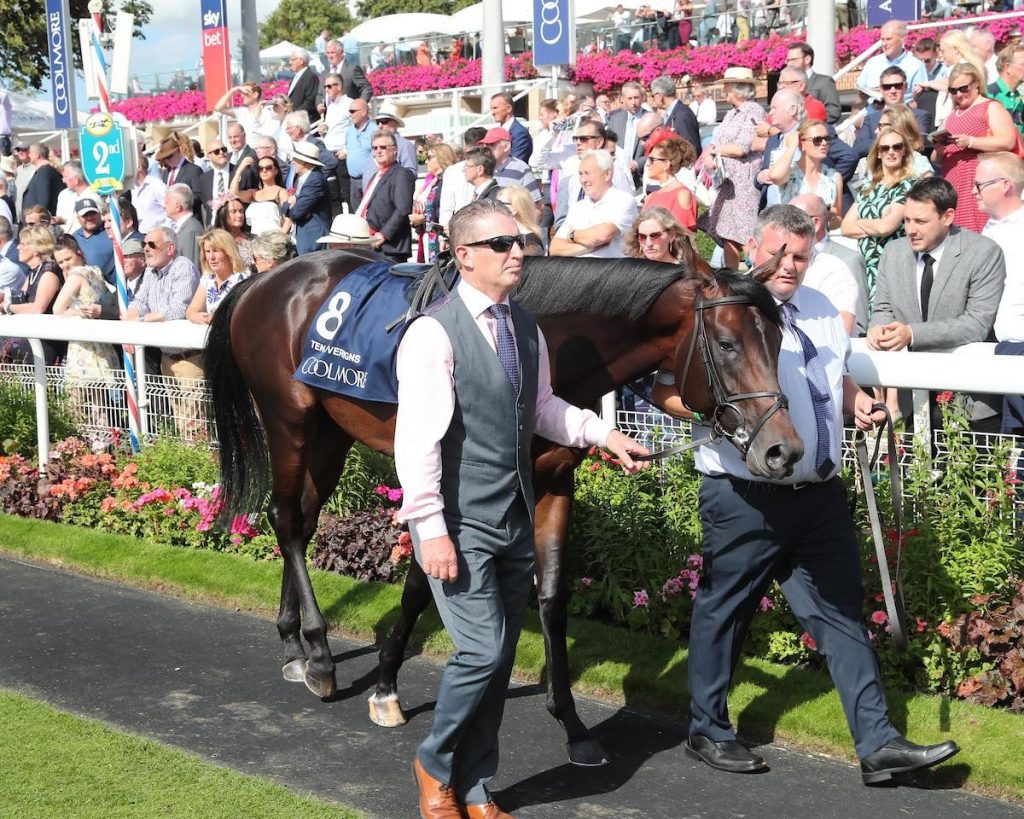 Advertise (Martyn Meade/Frankie Dettori) the 11/4 favourite, won the G1 Commonwealth Cup at Royal Ascot and the G1 Prix Maurice de Gheest on his latest start at Deauville, France, on August 4.

Ireland’s champion Flat trainer has yet to win the highlight of Haydock Park’s Flat Season.

Charlie Hills-trained Khaadem (Jim Crowley, 5/1) finished seventh behind Advertise at Royal Ascot, but has since marked himself down as a top-class sprinter with a dominant success in the Stewards’ Cup Heritage Handicap at Goodwood on August 3.

Dream Of Dreams is aiming to put a disappointing run behind him, having finished 10th in the G1 Darley July Cup.

The Tin Man (James Fanshawe/Oisin Murphy, 14/1) and Brando (Kevin Ryan/Tom Eaves, 14/1), who fought out the finish to last year’s Sprint Cup, both go to post.

The Tin Man would become only the second horse after Be Friendly (1966 & 1967) to win back-to-back runnings of the G1 highlight.

The Irish challenge also includes Forever In Dreams (Aidan Fogarty/Billy Lee, 33/1), who has not raced since finishing second behind Advertise at Royal Ascot.

The daughter of 2011 Sprint Cup hero Dream Ahead landed the six-furlong Listed Cecil Frail Stakes at Haydock Park in May.

German raider Waldpfad (Dominik Moser/Andrea Atzeni, 14/1) won the G3 Hackwood Stakes at Newbury on July 20, a race in which Khaadem and The Tin Man finished second and seventh, respectively.

Waldpfad has since finished second in the G2 Goldene Peitsche at Baden-Baden on August 25.

Dominik Moser said: “Waldpfad is in good form and we have been delighted with his preparation.

“We have been happy with him since his run at Baden-Baden. He came out of it very well and this has been the plan since.

“He was unlucky at Baden-Baden as he got a bump coming out of the stalls and the ground was very quick.

“He took on a talented British horse (Royal Intervention) who got first run and we were unable to make up the ground.

“Rain at Haydock and soft conditions will suit him. Softer ground is a benefit and I think that will see him to good effect.

“It is a little bit of a dream to have a runner in a G1 event at Haydock. We have already won a G3 in England this year and we are looking forward to the opportunity to compete in England again.

“I think six furlongs is his ideal trip, but he stays seven furlongs. It should be a stiff six-furlong test at Haydock and that will suit Waldpfad.”

The 13 runners are completed by Invincible Army (James Tate/PJ McDonald, 16/1), successful this season in the G2 Duke of York Stakes in May and the G3 Chipchase Stakes at Newcastle in June.

Dream Of Dreams, who was initially put in at 10/1 is now 8/1, and attracting strong each-way support.

In the £25,500 Listed Read Ryan Moore Exclusively At betfair.com Ascendant Stakes (3.00pm) over a mile noted He’s A Keeper (Tom Dascombe/Richard Kingscote) proved himself over the course and distance with a four-length novice race victory on August 9.

Others to note include Subjectivist (Mark Johnston/Franny Norton) and Shared Belief (Archie Watson/Danny Tudhope), both placed at this level last time out, as well as novice race scorers Tammani (William Haggas/James Doyle) and Sound Of Cannons (Brian Meehan/Oisin Murphy).

Haydock gets underway at 1.50pm with the £100,000 Better Odds On The Betfair Exchange Handicap run over a mile and six furlongs for three-year-olds.

Sir Michael Stoute landed the prize in 2018 with Mekong and the Newmarket trainer is represented by The Queen’s Calculation (Ryan Moore, 8st 12lb), a son of Gold Cup heroine Estimate who has won his last three starts.

The going at Haydock Park is soft, good to soft in places, with showers forecast for Saturday.

The post TEN SOVEREIGNS TO CASH IN AT HAYDOCK appeared first on Horse Racing News and Tips.