The President of the Government, Mariano Rajoy, stated, after meeting with the Irish Prime Minister, Enda Kenny, that Spain and Ireland will not renounce the essential principles of the European project and their pro-European vocation. They will also continue to back the economic and political integration of the European Union.

Mariano Rajoy received Enda Kenny at Moncloa Palace. The latter is holding a round of contacts with other Heads of Government to exchange impressions on the upcoming withdrawal of the United Kingdom from the European Union. 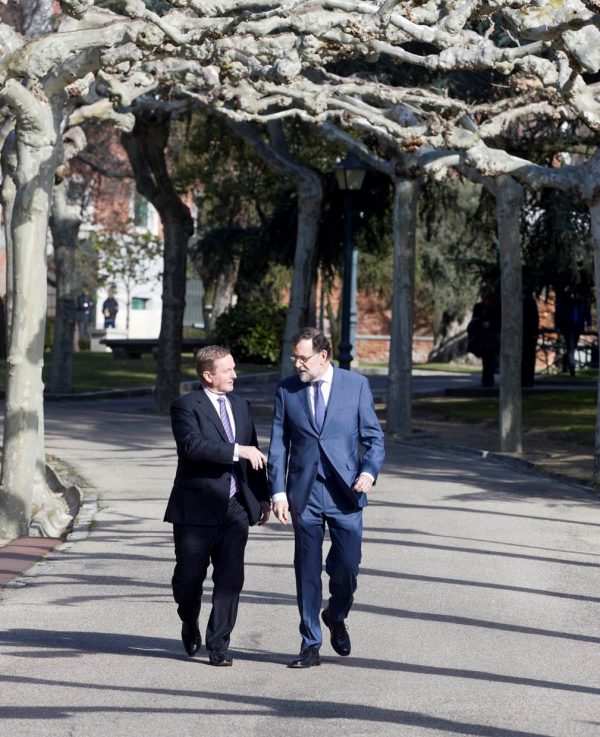 At the end of the meeting, the President of the Government of Spain recalled that the British Government plans to notify its intention to leave the EU before the end of March, in the terms established in Article 50 of the Treaty of the Union. Mariano Rajoy announced that Spain and Ireland will work together in the negotiations, which will foreseeably begin in the coming months, to maintain the interests of both countries and defend the rights of their citizens whilst maintaining the best possible relations with the United Kingdom.

“We will not renounce the essential principles of the European project, such as the indivisibility of the four freedoms of the internal market, nor will we renounce our pro-European vocation. We must continue to back European economic and political integration”, he stated.

Mariano Rajoy stressed that relations between Spain and Ireland “are wonderful” and a “firm will” on the part of both countries exists to continue improving them to the benefit of the people.

The special harmony that exists between the two countries, according to the President of the Government, can be seen in the “impressive tourist figures”: Spain is the leading holiday destination for Irish residents. In fact, in 2016, it is estimated that 1.7 million Irish citizens visited Spain, more than one-third of the entire population. Furthermore, Spanish tourism to Ireland has increased by almost 35% since 2012.

According to the President of the Government, the two countries are facing “a panorama marked by new opportunities” and that, after making great sacrifices, they have seen a marked improvement in their economies and have returned to the path of growth and job creation.

In this regard, Mariano Rajoy pointed out that Ireland “is the European Union country to enjoy the fastest growth”, and that Spain, after five years of negative growth, something it has never before seen, will recover 10% of its Gross Domestic Product that it had lost.

Mariano Rajoy announced that Spain and Ireland will step up their existing collaboration in the fight against terrorism and organised crime with the aim of “being as effective as possible”.

“We cannot undertake this battle alone; it makes no sense to do so because the borders have disappeared for almost all of us. And, hence, what makes us more effective in the end is for our intelligence services to collaborate and work together, for some to make their intelligence available to others so that they can act to ensure they are as effective as possible”, he highlighted.

The President of the Government also pointed out that he agrees with the Irish Prime Minister that Jihadi terrorism represents a serious threat and on the need to join forces to wipe out its geographic bases wherever they may be.

In relation to Syria and Libya, Mariano Rajoy reported that they agree on the need to find a peaceful solution, the only possible solution that respects the territorial integrity, sovereignty and independence of these countries”.

As regards Ukraine, they agree that the Minsk Accords are the appropriate route to achieving stability in the country, “Both our countries support the important work being done by France and Germany under the so-called Normandy Format”, he argued.

On another note, the two leaders tackled various regional issues related to Latin America of mutual interest to Spain and Ireland.

As regards relations with the Regional Government of Catalonia, Mariano Rajoy underlined his interest in “always trying to foster dialogue” and the fact that contact has been stepped up by the Vice-President of the Government and his ministers. He also argued that the holding of next week’s Conference of Regional Presidents is a “wonderful opportunity” to jointly address the issues that are of the greatest interest to the Spanish people, such as maintaining the Welfare State, pensions, education, healthcare and regional financing.

Regarding a potential meeting with the President of the Regional Government of Catalonia, Carles Puigdemont, he pointed out that “very fluid dialogue already exists and I imagine there will be no problem in seeing each other in the near future”. The President of the Government declared that he is not going to authorise a referendum that affects the unity of Spain, national sovereignty and the equality of the Spanish people because he has no legal entitlement to do so and because he is against these principles being done away with. Aside from that, he added, “we are willing to talk about anything: the Budget, investment and those issues that truly affect people on a daily basis”.

On another note, the President of the Government declared that he was in agreement with the position maintained by the Minister for Defence, María Dolores de Cospedal, in the Yak-42 case: “This is an incredibly unfortunate incident in which many people lost their lives, which took place some years ago now and that has been ruled on by the courts, but, at any event, I would like, as the minister has done, to express our empathy and our recognition to all the families and state that we are prepared to do everything possible that may help improve their situation”.

As regards the continuity of the former Minister for Defence at the time of the accident, Federico Trillo, as the Spanish Ambassador in London, Mariano Rajoy explained that the process to renew all appointments that took place in 2012 has now commenced and will continue in the coming weeks.

When asked about the press briefing offered yesterday by the President-Elect of the United States, Donald Trump, Mariano Rajoy pointed out that his responsibility is to maintain the best possible relations with all governments, and particularly with the government of this country. Hence, he added, he will endeavour to ensure that the “wonderful relations” that existed with the United States during Barack Obama’s mandate, at a bilateral level and also as a member of the European Union and of NATO will continue.

“When Mr Trump takes on his responsibilities as the President of the United States, we will work to get to know each other and understand each other better, to try to resolve those issues of interest to both parties together through a fruitful collaboration”, he pointed out. This also implies “talking frankly and clearly” he said, on issues we do not agree on.