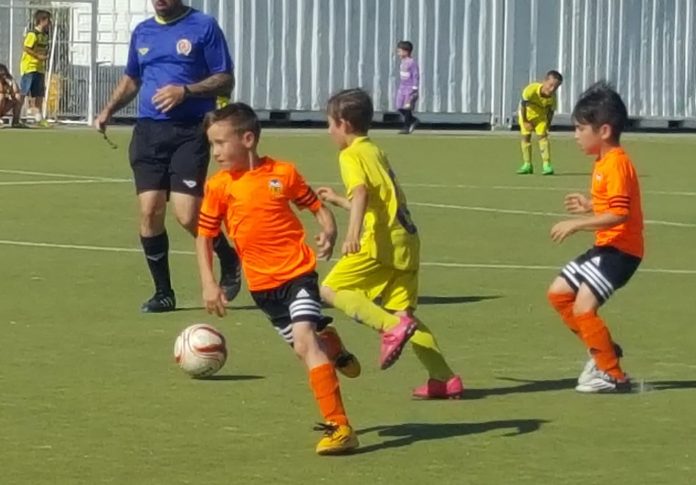 Daya had the perfect start when in the second minute they won a corner.  Alex took the kick, it was a great ball in, that the visitors just could not defend allowing Franky to steer the ball home for Daya’s opening goal.

On ten minutes Daya’s great start got even better when a quick counter attack ended with a fierce shot that flew in from Rocamora for Daya’s second goal.  It should have been three on fifteen minutes when a great cross from the left saw a home side forward completely miss cue what really was an easy chance !  It was all Daya now and surely more goals would follow.  To be fair to Aspense they did raise their game as the half wore on but were the home side becoming just a little too complacent with their two goal lead ?

On thirty four minutes the visitors rattled the Daya crossbar with the rebound being blasted high and wide.  Jaime in the Daya goal produced a great save as the half drew to a close to preserve Daya’s two goal lead.  So 2-0 at the break with the home side well worth their lead.  The visitors started the second half like an express train and on forty eight minutes Jaime had to make a fantastic point blank save low down.

Aspense were now playing a very vey physical game and the referee was struggling to keep control of the match with all the fouls being committed.  On sixty minutes Daya produced a great run and cross down the right that was almost connected with for what would have been a superb third goal.  The physical play by the visitors saw the red card given to their number seventeen on sixty one minutes.

On sixty three minutes the home side scored their third, after yet another good move and that was surely the points in the bag.  The red card seemed to have taken the sting out of the visitors game and with a man advantage Daya were now fully in control.  It became even worse for Aspense as yet another bad tackle saw a second red card  issued on seventy two minutes.

There was very little now from the visitors and on eighty minutes Sienna scored the fourth goal.  Cuco added the fifth and final goal with virtually the last move of the game.  It had been a very brutal game that the visitors had embarked upon.

They gave away so many free kicks and with the two red cards left themselves no chance of ever beating a well organized side that Coach, Jesus, had sent out today.  For my man of the match it has to go to the referee who somehow managed to keep the lid on a very physical contest.