Benidorm celebrated the official launch of the 2016 Royal British Legion Poppy Appeal last Friday amid the pomp and ceremony that the occasion so rightly deserved. 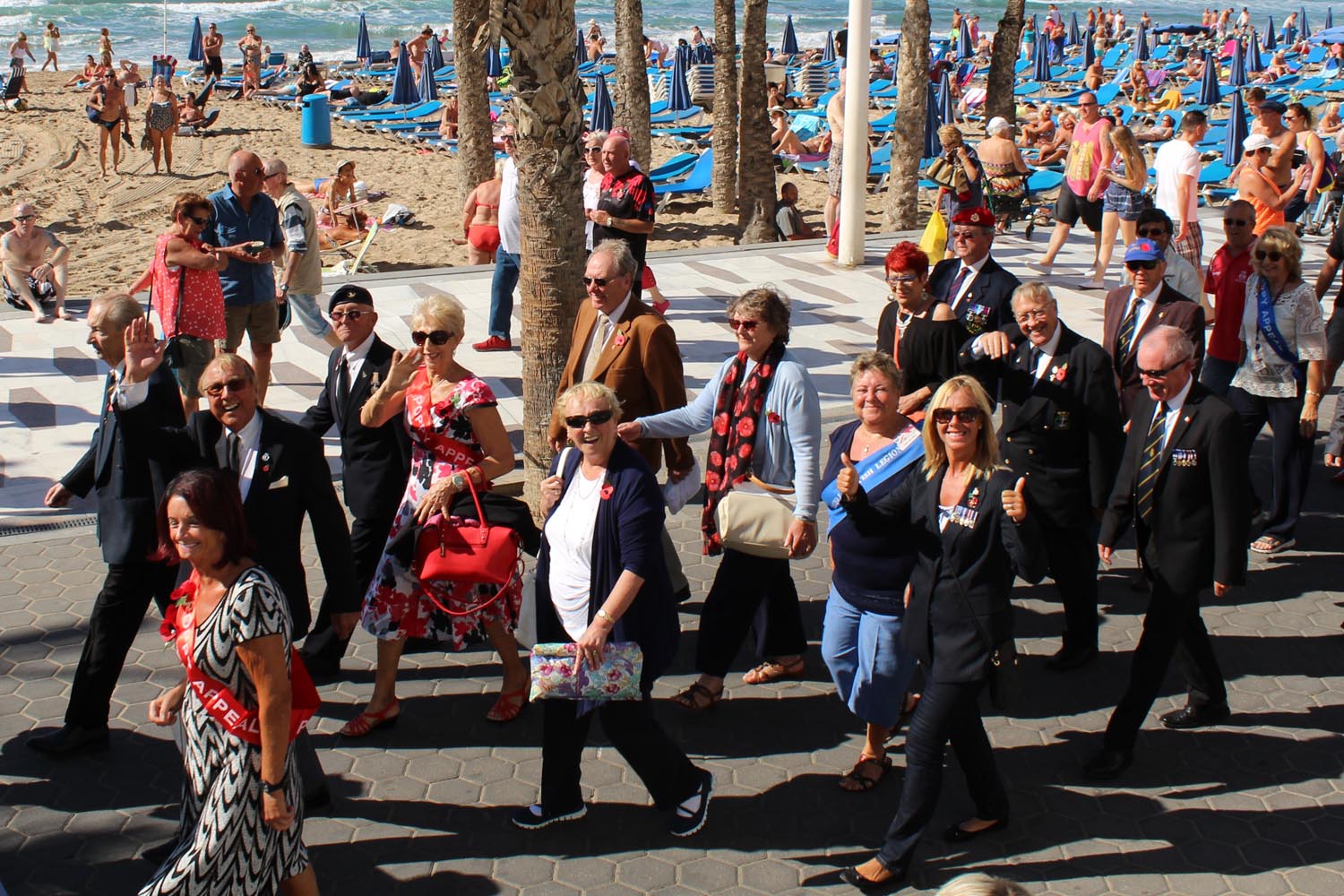 Over a hundred members from Torrevieja, Quesada and the Orihuela Costa attended the launch parade which was led by the highly acclaimed Torrevieja Pipes and Drums as they marched out along the Levante promenade amid veterans of all nationalities and services including former members of the RNA, RAAFA and RMA.

It was yet another event that made the participants feel very proud to be British, stepping out along the front to the rousing sound of bagpipes, something not too often seen in the popular resort, but a sight that was enthusiastically applauded by the many spectators that lined the route.

Caught up in the occasion, residents and holidaymakers alike stopped to show their support as the immaculately dressed Standard Bearers from across the North East of Spain marched along the route, demonstrating their pride in representing the British Military Charity. 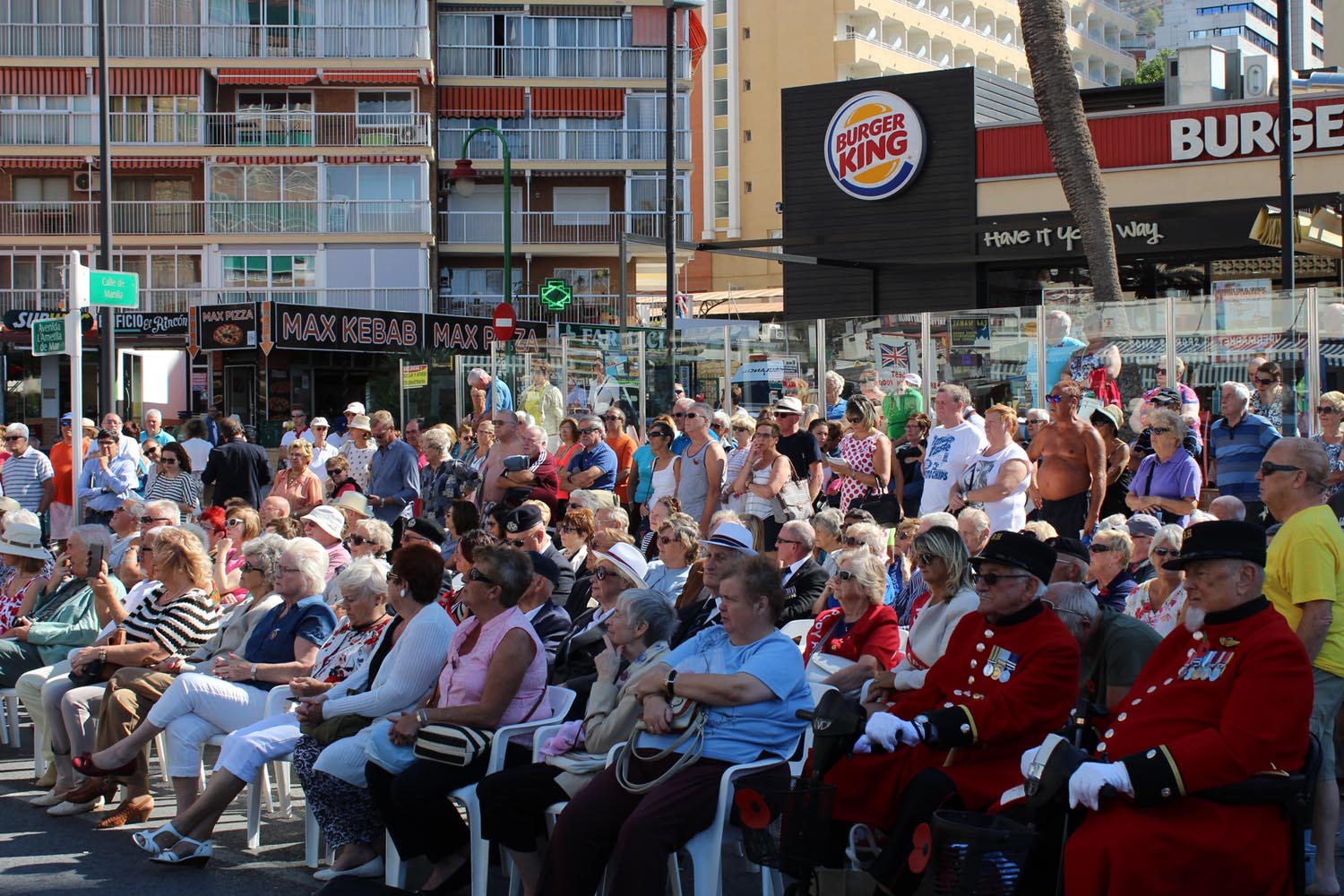 There were even many young bystanders caught up in the occasion as they applauded the parade of ex servicemen marching behind the pipes and drums, so ably led by two inmates from the Royal Hospital Chelsea, Arthur “Skippy” Teasdale aged 87 and Wayne Campbell aged 79, resplendent in their distinctive scarlet coats.

Skippy and Wayne, both members of the Orihuela Costa Branch of the RBL, are regular visitors to the area having attended rather more Poppy Launches than many of the members marching on the day. 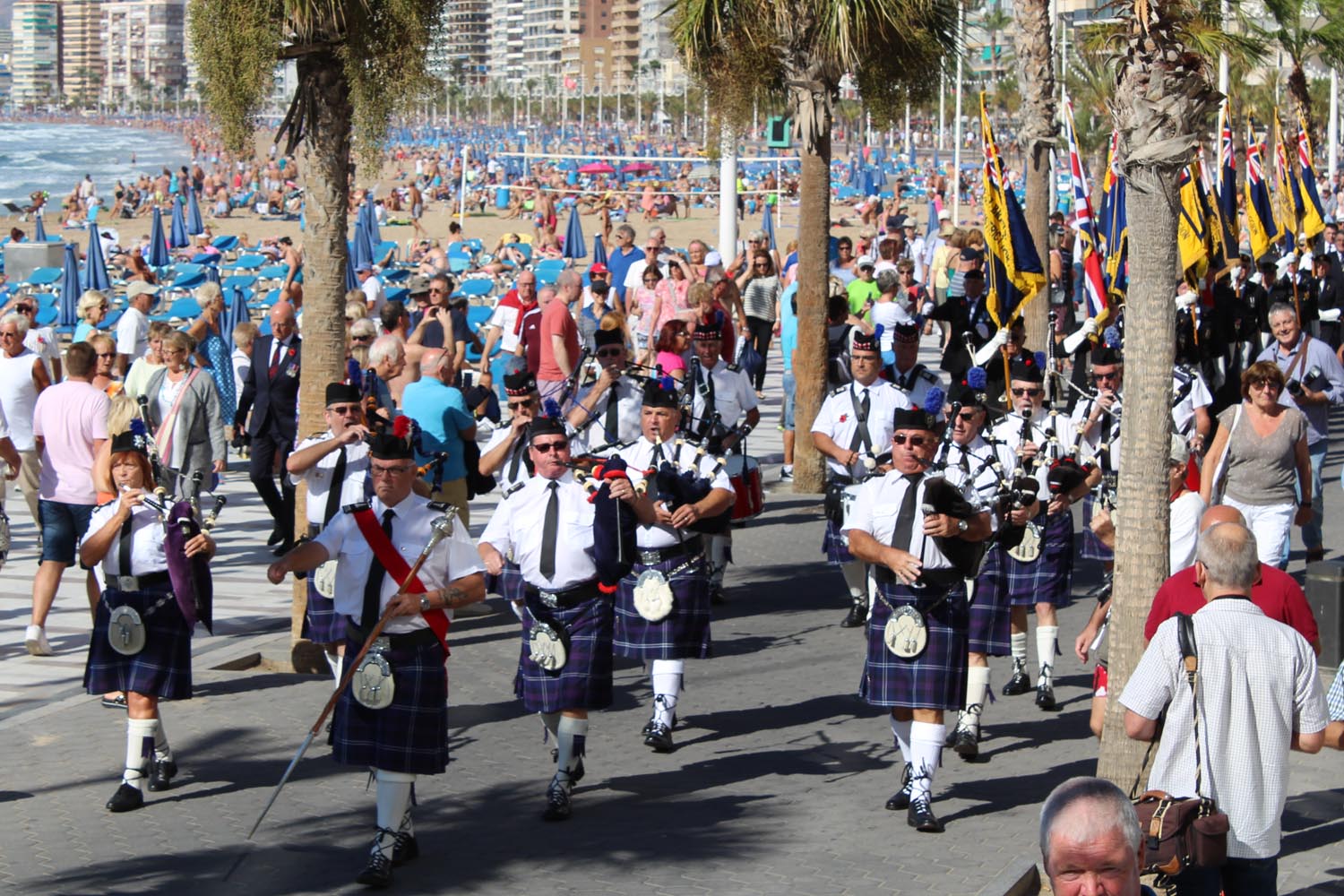 They were all accompanied by the Mayor of Benidorm, Toni Perez Perez, and the Assistant British Consul in Alicante, Sara Munsterhjelm.

The parade came to a halt at the end of the promenade where the Launch Officials took to the stage.  As the Spanish and British National Anthems were played the Standard Bearers stood proudly to attention.

Mr Nigel Hails – in his final year as Chairman of District North, thanked the city of Benidorm for the welcome that it always provides to the Royal British Legion. He spoke of the hard work that his members had carried out over the previous year in which the Poppy Appeal raised an astonishing €171,500.

He also emphasised that ALL of the money is used to help ex servicemen and their dependants in their time of need mentioning just a few of the measures on which the money was spent last year including furniture, stair lifts and the purchase of mobility scooters for those finding it difficult to walk.

The Mayor of Benidorm, Toni Perez Perez welcomed all participants as he took the stage. He said how delighted he was to host the Launch of the Poppy Appeal once again, highlighting the multicultural and multinational make-up of the city. 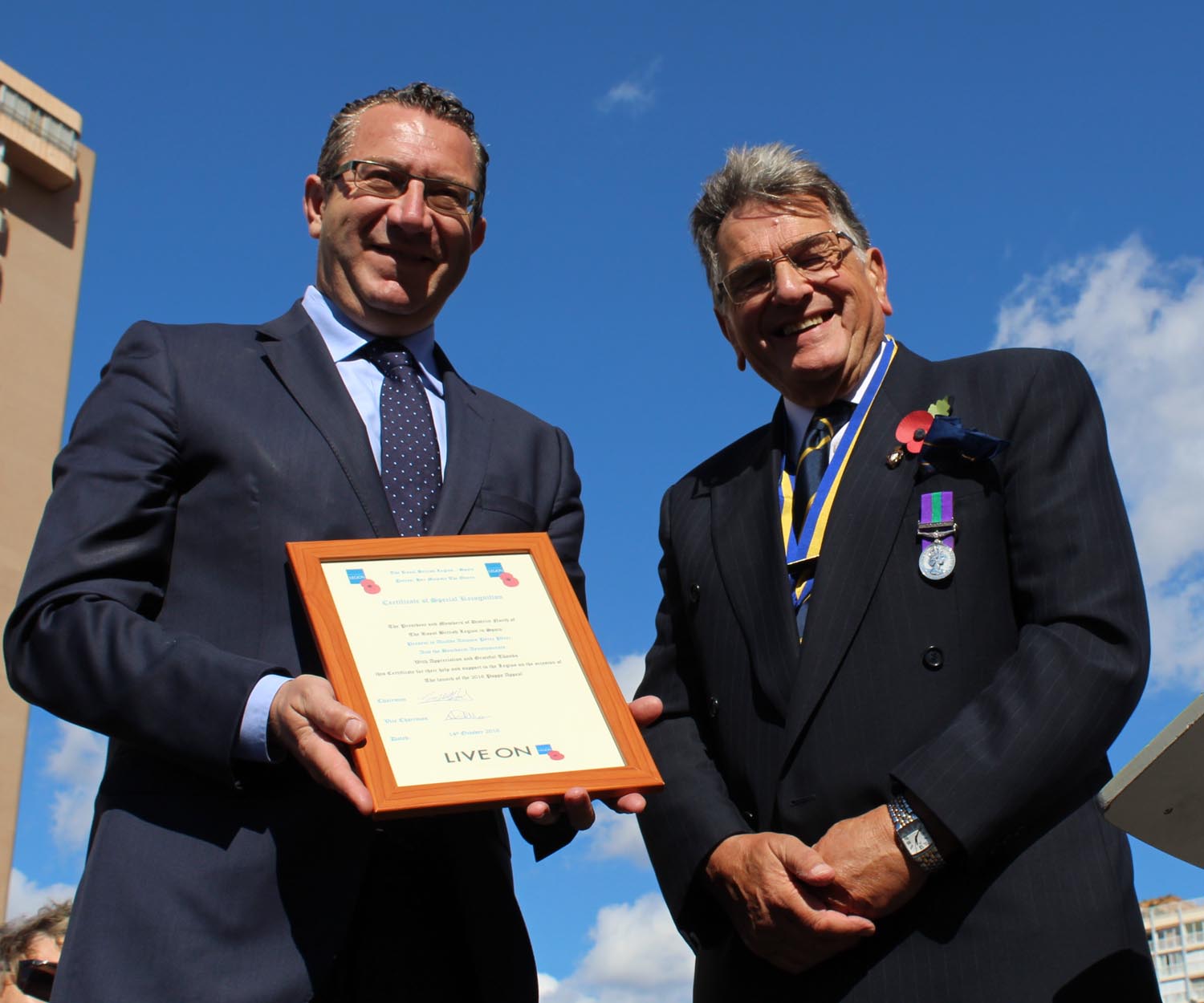 He was then presented with a Certificate of Honour by Nigel Hails, on behalf of the RBL in Spain. Mr Hails said that it was given in heartfelt thanks for the support and encouragement that the Ayuntamiento and the people of Benidorm provide to enable the launch of the 2016 Poppy Appeal here. In reply the mayor said that the Royal British Legion “is a role model” and that the organisation can always count on the support and encouragement of his council. 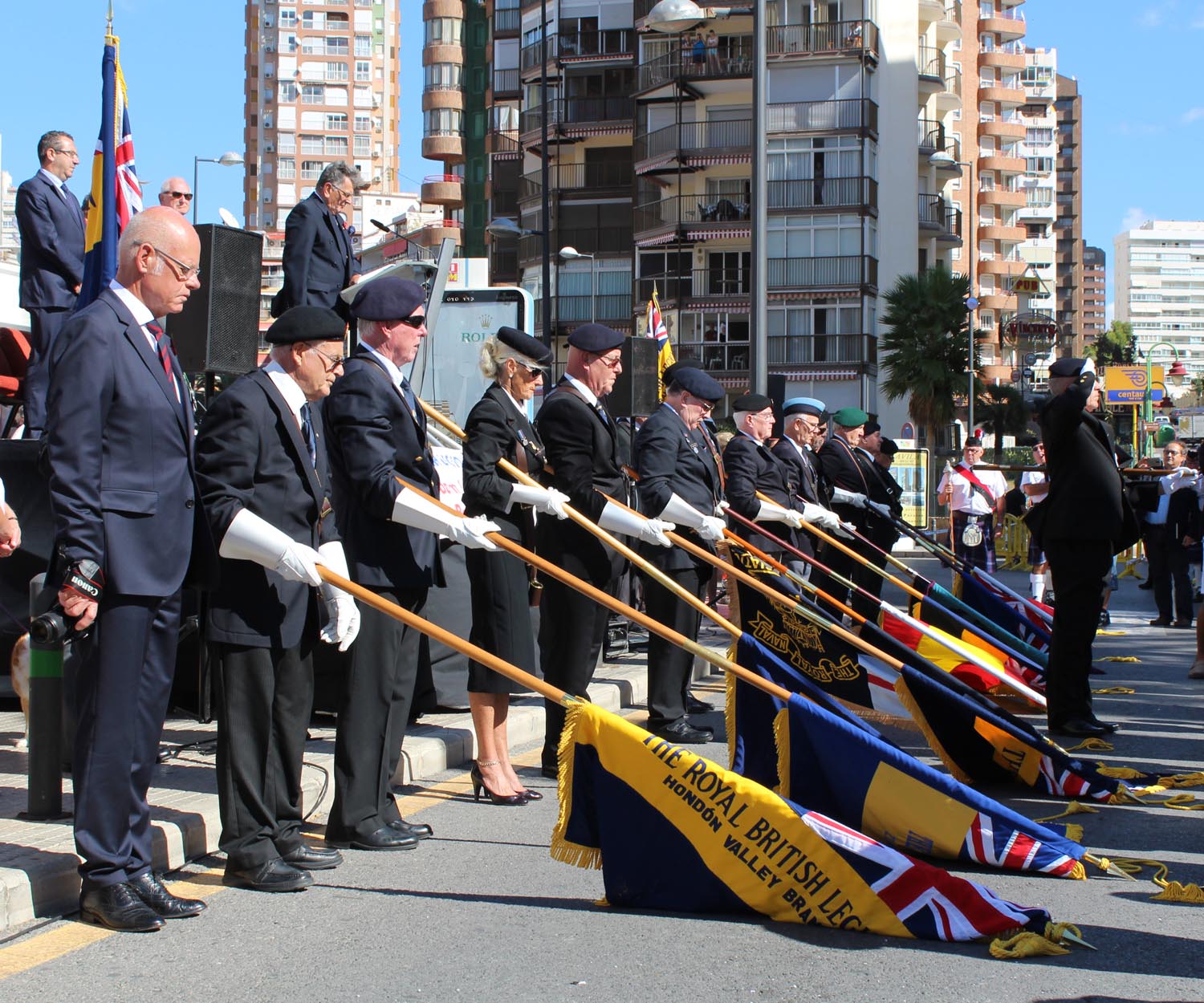 The ceremony ended with rapturous applause as the Standard Bears marched off with the band before hoards of spectators, both English and Spanish, descended on Skippy and Wayne, to pose for photographs.

2,664 new cases of coronavirus in the Valencian Community

The Vega Sur Fire Station in Torrevieja attended a...

One of the most powerful garden scents of spring...