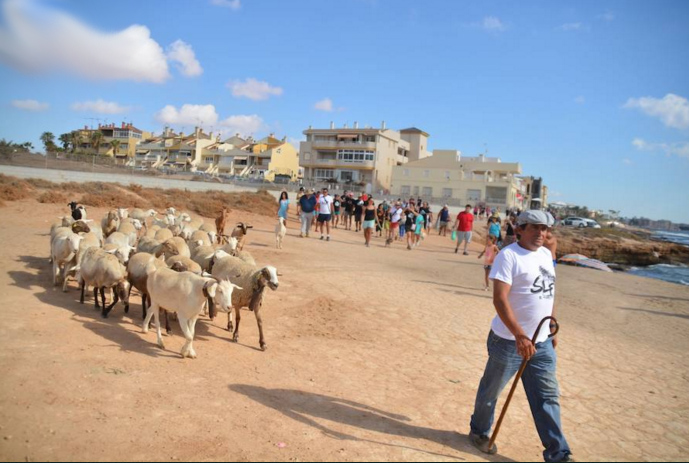 Over a hundred and fifty protesters followed a flock of sheep through la finca de Ferrís last weekend, in an effort to voice their disapproval at a number of actions being carried out by the landowner.

In an action organised by the group “Salvemos Lo Ferris” (Save Lo Ferris), they say that the owner has gone too far following the construction of ‘the wall of shame ‘that was erected a few weeks ago and now divides a section of the coastal strip.

Among those who attended the protest were the Councillor for Citizen Participation, Victor Ferrández, Izquierda Unida and the president of the Alicante Agrarian Association of Young Farmers (ASAJA Alicante), Eladio Aniorte, who showed his full support to the protest saying that it is “the only stretch of coastline and natural beauty left for people to enjoy, following the constant abuses to the area by constructors and developers.” He claimed that part of the wall is built on public land, encroaching on a cattle trail that starts in Punta Prima and goes all the way along the coast to Cabo Cervera and then inland to La Mata lake.

The president of the Platform, Vicente Henarejos, said he was delighted at the success of the event “attended by people of all nationalities from across the entire region.”  He emphasised that the palm grove in this privileged area of Torrevieja coast should be available to the public so that it can be enjoyed by all citizens.