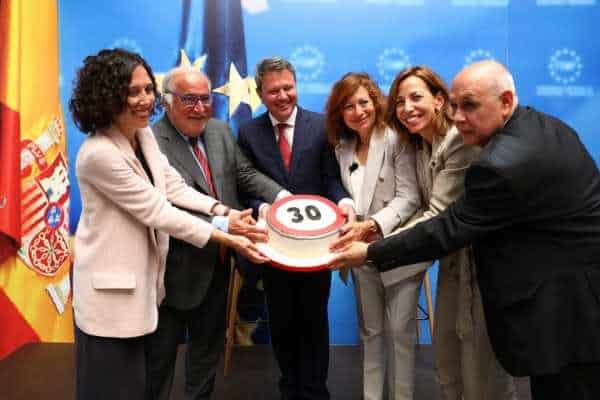 The Spanish Federation of Municipalities and Provinces (FEMP), in collaboration with the General Directorate of Traffic, have organised a meeting to analyse how the implementation of the 30km/h limit in towns and cities on streets of a single traffic lane in each direction, a year after its entry into force.

The objective of the act has been to learn about the experience of local entities during this first year and present the provisional data on urban incidents for 2021.

Taking into account the first 8 months that have elapsed with the new 30km/h regulation (May-December 2021), the road accident rate in cities has decreased by 14%, which means 38 fewer deaths.

From May to December 2021, there have been 222 urban fatal incidents in which 227 people have died. During this period, vulnerable users have been reduced by 17% and people over 64 by 22%.

According to Pere Navarro, general director of Traffic, “it is very little time to make an assessment. The manuals stipulate a minimum of 3 years to know if the measure adopted meets the expected objectives, therefore we will be attentive to the data”. He also added that “it is important to remember that this measure was born in response to the demand made by the municipalities and the FEMP – hence they are the protagonists and that is why we are at home – and secondly for reasons of road safety -avoiding a single deceased, already compensates for the measure implemented-“.

He also recalled that 30km/h is a convincing measure, because the consequences for the population go further, by reducing traffic, noise, pollution and increasing the quality of life of citizens.

To find out how cities are adapting to this new urban model with measures such as 30km/h, a round table has been organised moderated by the president of the FEMP Commission for Transport, Sustainable Mobility and Road Safety, and the Mayor of Irún, Jose Antonio Santano who spoke with Natalia Chueca, Minister of Public Services and Mobility of the Zaragoza City Council; Nora Abete, Delegate Councillor of the Mobility and Sustainability Area of ​​the Bilbao City Council, and Milagros del Barrio, Mayor of the Toledano municipality of Esquivias.

“Speed ​​30 km/h is a commitment to urban mobility with which we all win”, underlined Carlos Daniel Casares in his speech, in which he highlighted that “reducing speed limits on urban roads means, probably, the most effective legislative modification in urban road safety carried out in the last three legislatures”.