Golf, one of the most glamorous sporting activities in the world, remains a favorite among sports fans and has graced us with a number of remarkable talents over the years. The discipline also lets us in on several top tournaments every year, as well as the occasional big story.

The list below takes a look at some of the best players to ever swing a club. The No.1 golfer should come as no surprise.

Perhaps no other golfer has influenced golf picks as Tiger Woods has. The American started a run in 1997 that leaves him as the best-ever player. He simply dominated tournaments and is responsible for changing the landscape of the sport altogether.

Woods has had to battle injuries and some exposure as it pertains to his personal life. But he might not get to add to his incredible list of achievements as he’s dealing with injuries suffered in a car crash earlier this year. Tiger won the ZOZO Championship in 2019, beating favorite Hideki Matsuyama by three shots to win his 82nd PGA Tour title and, as to whether he can reach 83 is left to be seen.

Woods has won 15 major championships along with his 82 PGA Tour wins, 10 Player of the Year awards, and has the lowest career scoring average in the Tour’s history.

It could be argued that Jack Nicklaus is actually the best ever and there are many who would side with that argument. Nicklaus, now 81, helped make golf into what it is today. He brought out the best in his opponents and maintained a level of skill that saw him run through courses around the world.

The Ohio native won 18 major championships and a whopping 37 top twos in majors, beating the biggest names in the sport when they were at peak points in their careers. When he failed to beat them, they had to be near perfect.

He won his sixth Masters in 1986 at the age of 46, channeling his prowess to outdo a number of the era’s top stars.

He’s the GOAT of golf in the eyes of many, and with good reason.

Sam Snead is the standard of excellence when it comes to winning and form. Employing a buttery-smooth swing, Snead made easy work of competition all over the world and his record of 82 PGA Tour titles was only matched by Tiger a few years ago. He had wins in four different decades, winning the Greater Greensboro Open at 52 years old in 1965, having won the West Virginia Closed Pro in 1936.

Snead won three Masters, three PGA Championships, and a British Open but unfortunately never won the U.S Open, which is perhaps the only blot on his illustrious career.

A 60-time PGA Tour winner, Arnold Palmer could be considered a golfing pioneer as he ushered the transition of golf from a country club event to a sport watched around the world. He was in contention at every Masters from 1958 to 1968, except in 1963, and won four times. He finished second twice, third once, and fourth on two occasions. 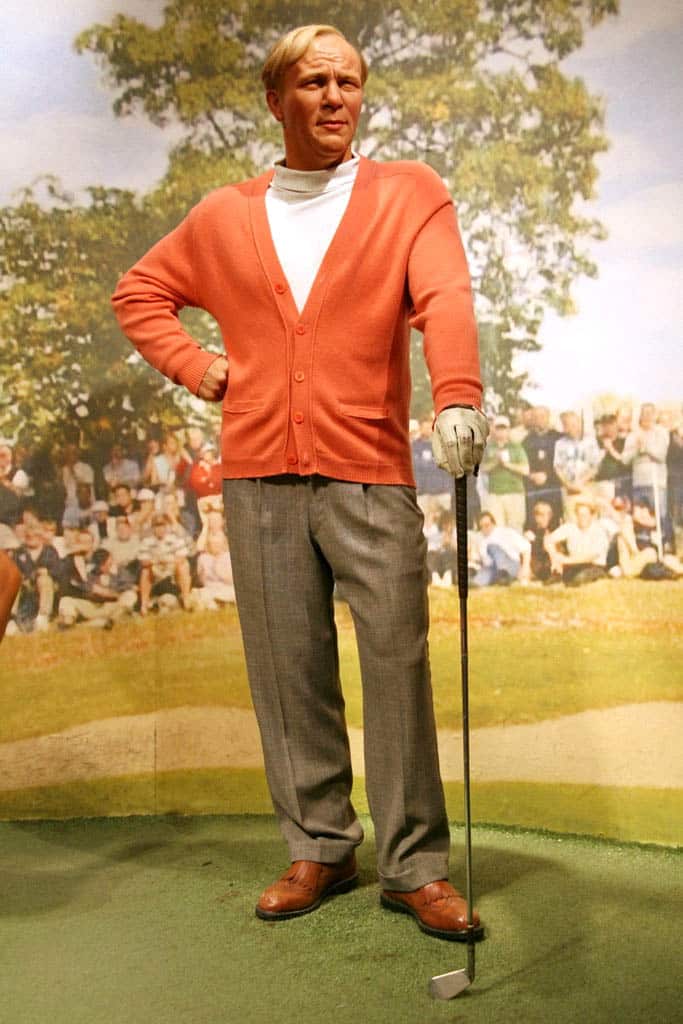 Palmer rose to fame at The Masters but the U.S Open in 1960 is what ensures his name will live on as one of the best golfers to ever do it. The tournament featured a 20-year-old Jack Nicklaus, as well as Ben Hogan but it was Palmer who would steal the show with a drive that erased a seven-stroke deficit and prompted the biggest comeback in the history of the Open.

The aforementioned Ben Hogan wasn’t considered to be a man of the people given his insane drive and quest for perfection. Hogan is the greatest maker of golf shots the game has ever seen, using nearly unnatural control of the ball to leave onlookers in awe.

He had a troubled career, though, failing to control the hook in his earlier years. He was then made to fight his way back from a near-fatal auto accident in 1949. He kept going until suffering a major stroke.

Hogan is one of only five players to win all of the Grand Slam events and became the first to win three majors in a single year in 1953, triumphing at both Opens and the Masters. The British Open that year was his last major tournament.

His last tournament, the 1971 Houston Champions International saw him walk off in the first round and he would never play again. Hogan would later say that, while he liked winning, he loved playing the way he wanted to play even more.

The airport management company, Aena, has put out to...

The Valencia regional Ministry of Health has awarded the...

After almost 30 years of conflict and neighbourhood complaints...