For the fourth consecutive day there have been no deaths from coronavirus in the Valencian Community. The province of Alicante has registered only one new case of coronavirus.

As for new positive cases, since Tuesday’s update 16 cases have been detected through PCR, bringing the total number of positives to 11,254 since the pandemic began.

The total number of deaths from coronavirus is 1,439 at the moment. The increase in cases reflected in relation to the data of the last update responds to the inclusion of 7 deaths that occurred in residences during the last week of May and that, after tests, are confirmed or epidemiologically linked to Covid. By provinces: 220 in the province of Castellón, 504 in that of Alicante and 715 in the province of Valencia.

Updating the situation in residences 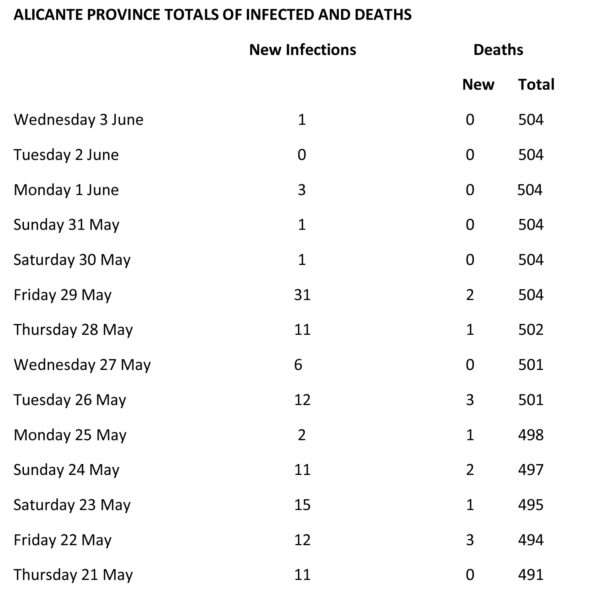 There has been just one death across Spain in the last 24 hours. That brought to an end a symbolic run of two days when the country had not notified a single fatality to the central government.

The total number of official Covid-19-related fatalities in Spain now stands at 27,128.

The number of new infections detected in the last 24 hours rose by 219, almost double Tuesday’s figure of 137, but the cumulative total since the start of the crisis has not risen by the same amount.

On Tuesday, the report from the ministry stated there had been 239,932 total infections, whereas today that number is at 240,326. The difference between those two figures is 394. That means that the difference between the 219 positives in the last 24 hours and the difference in the totals between today and yesterday correspond to previous days and have been reported late by the regions. The day-on-day increase in cases is 0.09%.