The Valencian Community continues to take positive steps in the fight against the coronavirus. In the last 24 hours, the number of discharges has far exceeded the number of new cases with 222 people cured compared to 24 new positives.

The new cases, as confirmed by the Minister of Health, Ana Barceló, this Thursday number 15 in Valencia, 8 in Alicante and only 1 in Castellón.

There have also been 9 deaths in the last 24 hours, of which one was a resident in a nursing home: Castellón recorded no deaths while there were 4 in Alicante and 5 in Valencia.

The trend of those being discharged continues to be good, with 222 people cured bringing the total number to 9,490. There have been 120 in Valencia, 61 in Alicante and 41 in Castellón. Currently only 23% of cases are active (20% in Alicante and 25% in Valencia and Castellón).

In nursing homes, oneresident died from covid-19 while there are still cases in 93 Valencian nursing homes. Of them, 28 are under direct control, given the virulence of the virus (two less than yesterday).

In the last few hours, 27 health professionals have been discharged, but 707 continue to be infected. Since the virus broke out, 1,968 medical personnel have been cured. 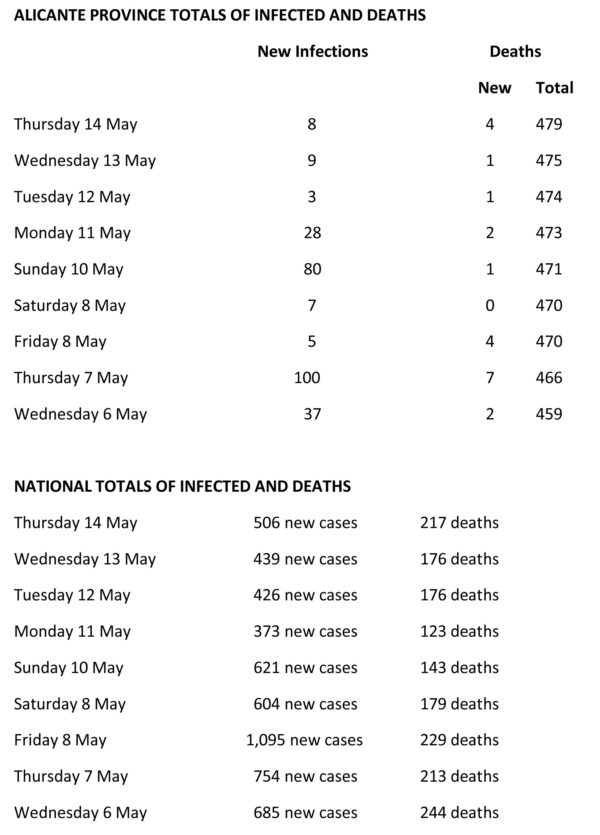 Both new cases and deaths from covid-19 have been on the rise since Monday, according to data released by the Ministry of Health on Thursday. The number of new cases in the last 24 hours has risen to 506, up to a total of 229,540, 0.22% more than the previous day. This figure represents 0.4% of the population of Spain.

Daily deaths have also risen to 217, 0.88% more than the previous day, which shows that since the beginning of the spread of the virus there have been 27,321 deaths.

The director of the Centre for Coordination of Health Alerts and Emergencies (CCAES), Fernando Simón, explained that the increase in the number of deaths is because Catalonia has reported a large number of cases, and that not all correspond to the last 24 hours. In total it has 131 deaths (60% of the total), compared to 66 and 71 on the previous two days.