In the last 24 hours there have been a further 27 cases of Coronavirus in the Valencian Community and 6 deaths.

The coronavirus pandemic has left 27 new cases and 6 deaths in the Valencian Community, during the last 24 hours representing a 50% reduction in deaths compared to the data provided yesterday.

None of the deaths are in nursing homes. These losses have occurred in Alicante (4) and Valencia (2), while in Castellón no deaths have been recorded.

Discharges in the last 24 hours number 171 patients who have overcome the disease, which brings the number of discharges to 8,181 since the start of the pandemic. By province, 19 in Castellón, 65 in Alicante and 87 in Valencia.

The situation in the residences is stabilising at a gradual rate. According to Health, there are a total of 75 senior centres in the Community with positive cases among their residents. 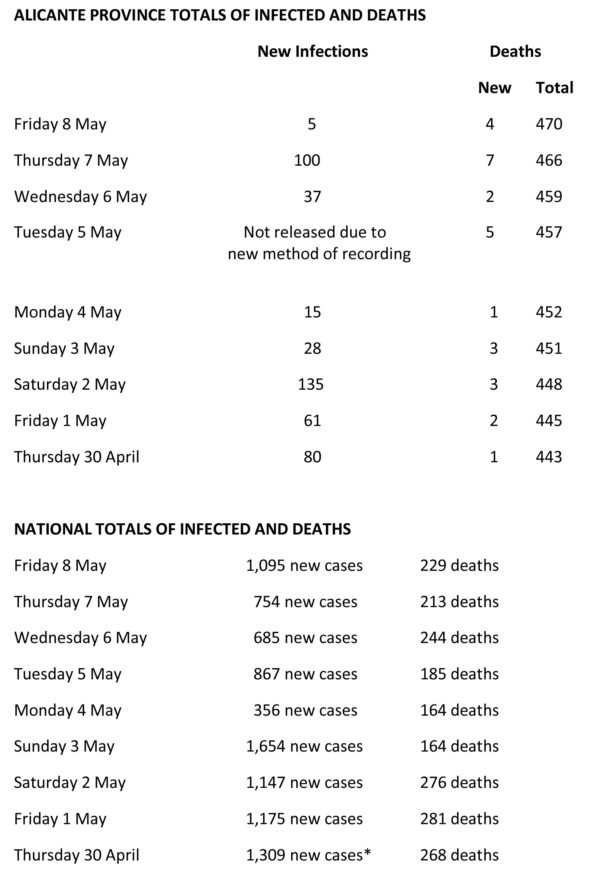 Letting down our guard

On four separate occasions during her press conference, Health Minister, Ana Barceló, referred to the images of the past weekend, with thousands of people on the street after more than 40 days of confinement, failing to keep security distances and without the protective masks. She said she was greatly concerned that we are letting our guard down.

However, she stated that it is still early to check if there are consequences of this relaxation of the measures, since the infected patients take an average of between 4 and 14 days to develop the symptoms.

“First for you, and also because of all you must protect your families, parents, siblings or grandparents. Take care of them, and the best way to do it is by taking care of yourself, do not let your guard down, because it is serious, “said Barceló. It should be remembered that in Alicante, the Police have had to reinforce their security controls in recent days following various sanctions imposed on groups of young people who were holding parties.

Slight increase in deaths across Spain

Spain has registered another slight rise in the number of daily deaths with coronavirus with 229 new fatalities in 24 hours, compared to 213 on Thursday. In total, the deaths are now 26,299.

Those infected, who were diagnosed by PCR total 222,857, that is an additional 1,095 cases in the last 24 hours, 341 more than on Thursday, bringing the total number of infected people to 222,857.  There have been 131,148 patients who have recovered since the onset of the health crisis.