Deaths from coronavirus have fallen again in the last 24 hours, with 268 deaths, 57 fewer than on Wednesday, when 325 were reported, bringing the total number to 24,543. This is the lowest figure for new deaths since the pandemic began.

However. the Ministry of Health only reported a total of 24,543 deaths on Thursday, as it excludes the total figures from the Community of Madrid and Catalonia, which notify deaths by a different method.

The Ministry also reported 213,435 confirmed cases, 1,309 more than Thursday, the lowest recorded figure since 20 March. It should be borne in mind that this data does not include infections detected by antibody tests. A further 3,103 recovered patients are also reported, bringing the number of patients who have overcome the disease to 112,050.

By Autonomous Community, Madrid is the region with the highest number of people affected, with 61,171 people already registered, followed by Catalonia with 48,916 people infected by the coronavirus. 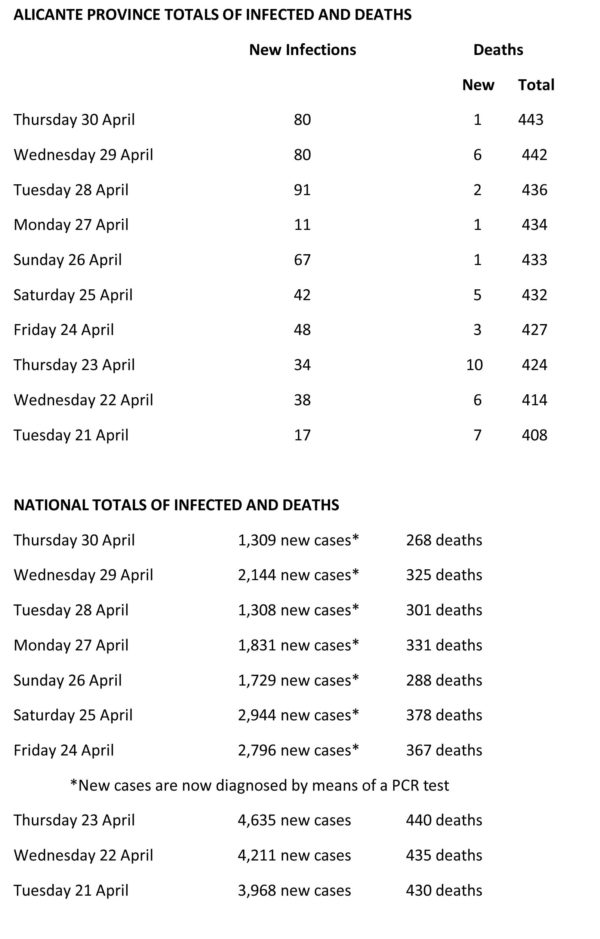 Cases in the Valencia Community

The Valencian Ministry of Health has confirmed this Thursday 242 new cases of coronavirus and 19 deaths in the Valencian Community in the last hours, bringing totals of more than 12,000 infections and more than 1,200 deaths in Valencia since the pandemic broke out.

Hospital admissions in the Valencian Community continue to decline however. Right now, there are 674 people admitted (42 less than yesterday), which represents 17% of the total active cases. This trend is also repeated in the case of ICU admissions, which have decreased by 3% with 127 people. Since the pandemic began, 5.5% of all positive cases have required admission to the ICU (663 people).

In addition, 242 new positive cases have been detected: 67 are in the province of Castellón, 80 in Alicante and 95 in Valencia.

To date there have been a total of 1,244 deaths in the Valencian Community: 186 in the province of Castellón, 443 in Alicante and 615 in that of Valencia.

Updating the situation in care residences

Primary care family doctors warn that in the last week there has been an upturn in mild cases of coronavirus, which are linked the return to work of thousands of people just over two weeks ago. The president of the Valencian Society for Family and Community Medicine, María Ángeles Medina, puts this increase in cases at around 10%.

These are patients who have started to develop mild symptoms of the virus and therefore remain at home under follow-up checks by their family doctor.