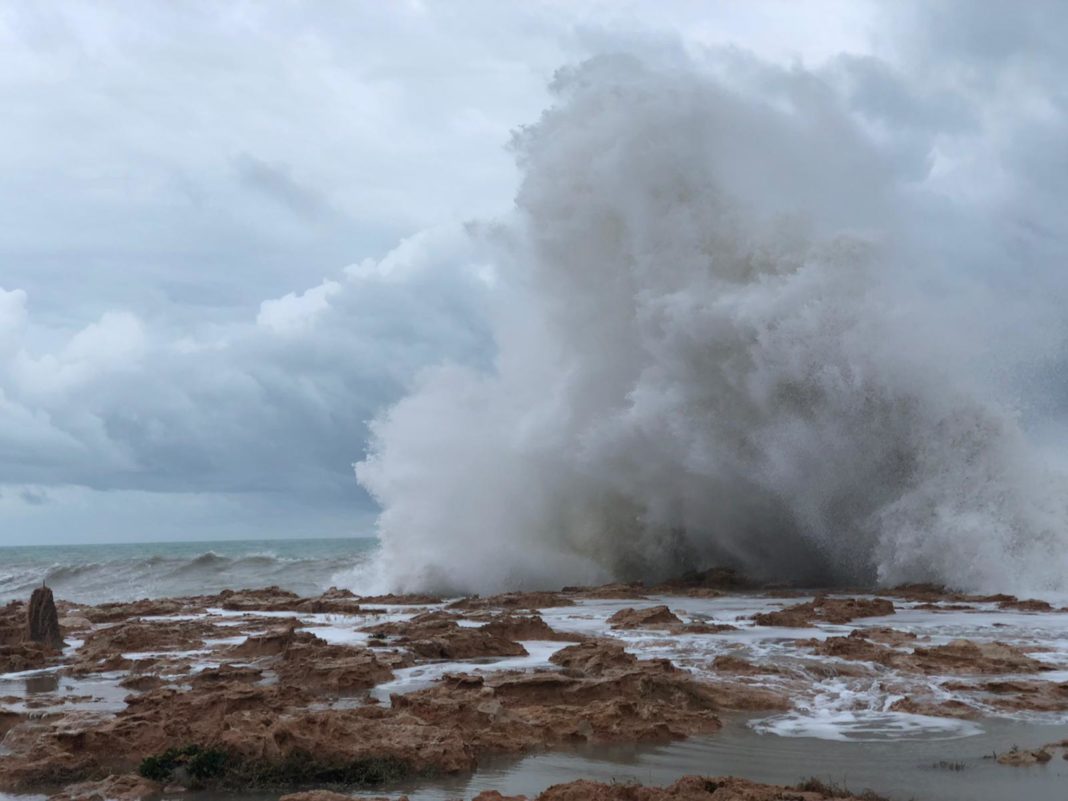 The storm “Gloria” and the acute drop in temperatures that arrived on the Mediterranean coastline on Sunday night,  is undoubtedly caused by the climate crisis, according to Jorge Olcina, director of the Laboratory of Climatology at the University of Alicante.

Fortunately the weather front that on Monday caused havoc across a large part of the province, will begin to head in a northerly direction towards Catalonia. Yesterday, however, the storms and the snow devastated road and rail infrastructure while leaving 123,000 students in 90 municipalities without school although many were expected to return today.

Announcements this morning, however, have seen the authorities in both Torrevieja and San Miguel de Salinas, tae that their schools and colleges will remain closed.

The Red Cross set up a special operation to serve 86 homeless people in Dénia, Alcoy, Alicante, Elda, Novelda and Calpe and the Telecare service also has its own procedures in operation for the care of the elderly with hostels operating in Alicante and Elche. The Civil Guard was called out to assist 600 people in different parts of the province, and there were up to 20,000 homes without power in the Marina Alta, El Comtat and Orihuela, including the Orihuela Town Hall.

So much rain fell that the floodgates of the Guadalest, Amadorio and Beniarrés reservoirs had to be opened for safety, so that the water pressure could be relieved by its three compounds after reaching the level limit. In Guadalest the water also reached its top level (11.8 hm3), the same as in the Amadorio reservoir (14.24 hm3) while the Algar river was flowing at a rate of 100 cubic meters per second.

In Orihuela, a palm tree fell across a car causing two injuries and in Calpe, a Dutch tourist had a broken leg when he was hit by a wave while he was taking photographs with firneds.

In the Hospital of La Vila a power failure forced the suspension of operations, after an electrical town was blown over by the wind in Xixona. 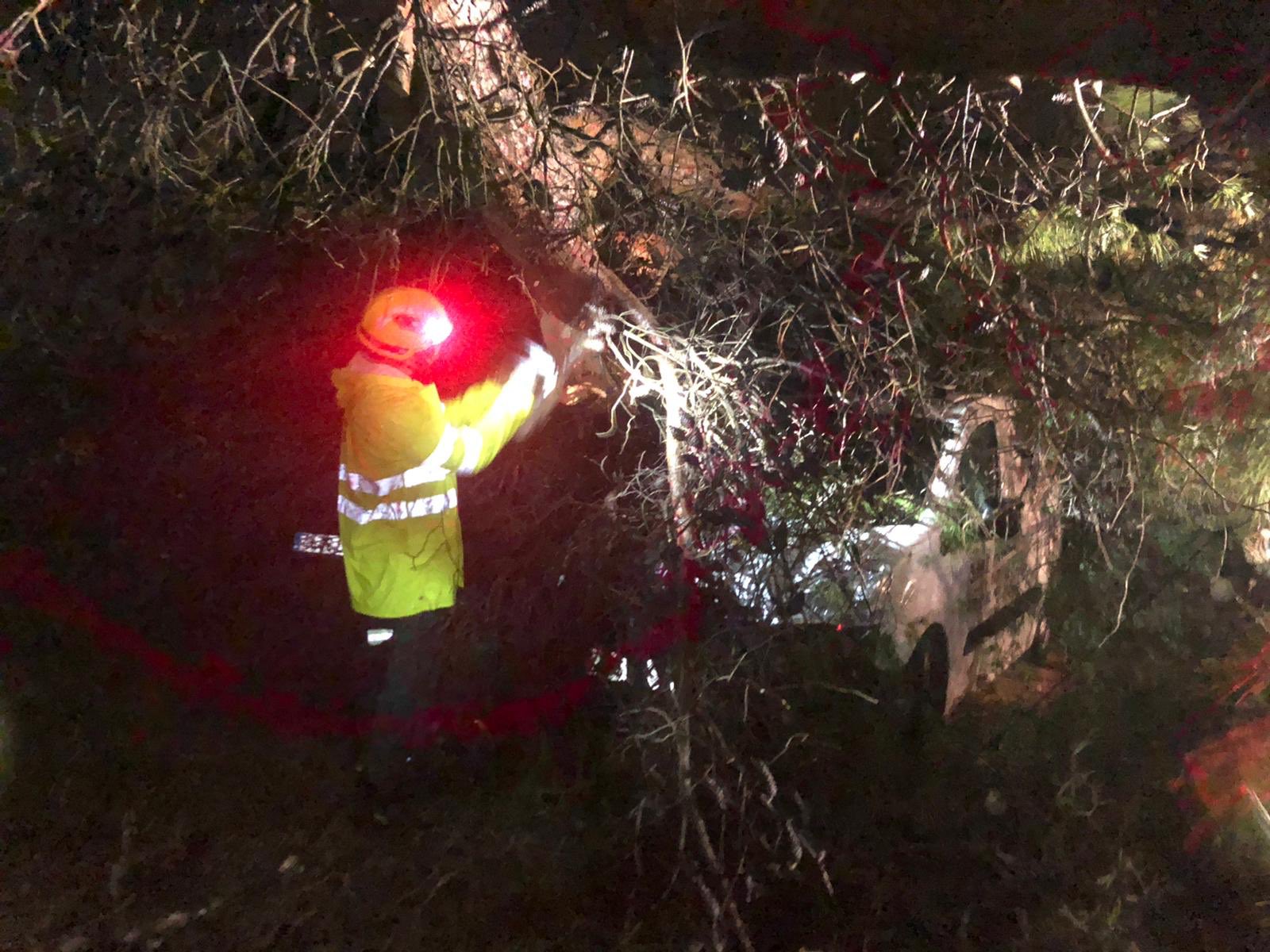 The greatest damage was in the Marina Alta with the overflowing Gorgos river and the beaches and promenades of Benissa, Xàbia and Calpe which were all badly damaged, as the storm was accompanied by gale force winds that were also felt in other municipalities such as Alicante, Elche, Guardamar and Santa Pola, where the waves left all of the beaches ravaged.

The storm and high winds were accompanied by the second heaviest snowfall in the province of Alicante in the 21st century and, apart from that of just three years ago (2017), you would need to go back to the 1990s and 1980 for similar comparisons.

The A-31 highway between Sax and Villena, the A-7 in Ibi and the A-33 in Fuente la Higuera, as well as many secondary roads, were closed for a good part of the day. The Federation of Entrepreneurs of l’Alcoià and El Comptat (Fedac) criticized the “poor response and the lack of means that caused many of the the roads to be closed.”

All the regional roads as well as the rural access roads to Villena – through Biar, Sax, Caudete, Pinoso, Cañada and Yecla – suffered closures for several hours as well as the A-31 Alicante-Madrid and A-33 motorways Valencia-Murcia and CV-80 Sax-Castalla. In Petrer the movement of vehicles was closed on the access road to Xorret de Catí, at Molina la Reja.

Villena and Alcoy was completely cut off by the snowfall and it took several hours before the two towns were able to gain any sort of normality with other parts of the region. Iberdrola technicians worked against the clock to detect and repair breakdowns as temperatures through the night were expected to fall below freezing freeze after the snowfall and at least 3,000 homes are still without electricity.

Aena extended until 5am this morning the closure of the Alicante-Elche airport where 179 flights were scheduled yesterday carrying approximately 30,000 passengers . At least one hundred of these flights were diverted by the companies to the airports in Murcia and Valencia.

The storm forced the port of Valencia to close, so the port of Alicante had to attend the “Martin i Soler” of Balearia , the ferry from Mostaganem (Algeria). The docking took place without incident, disembarking its 450 passengers, 200 vehicles and 15 trailers. The port of Alicante remains open and without incidents, since it is situated in a natural dock which provides protection from most adverse weather conditions. 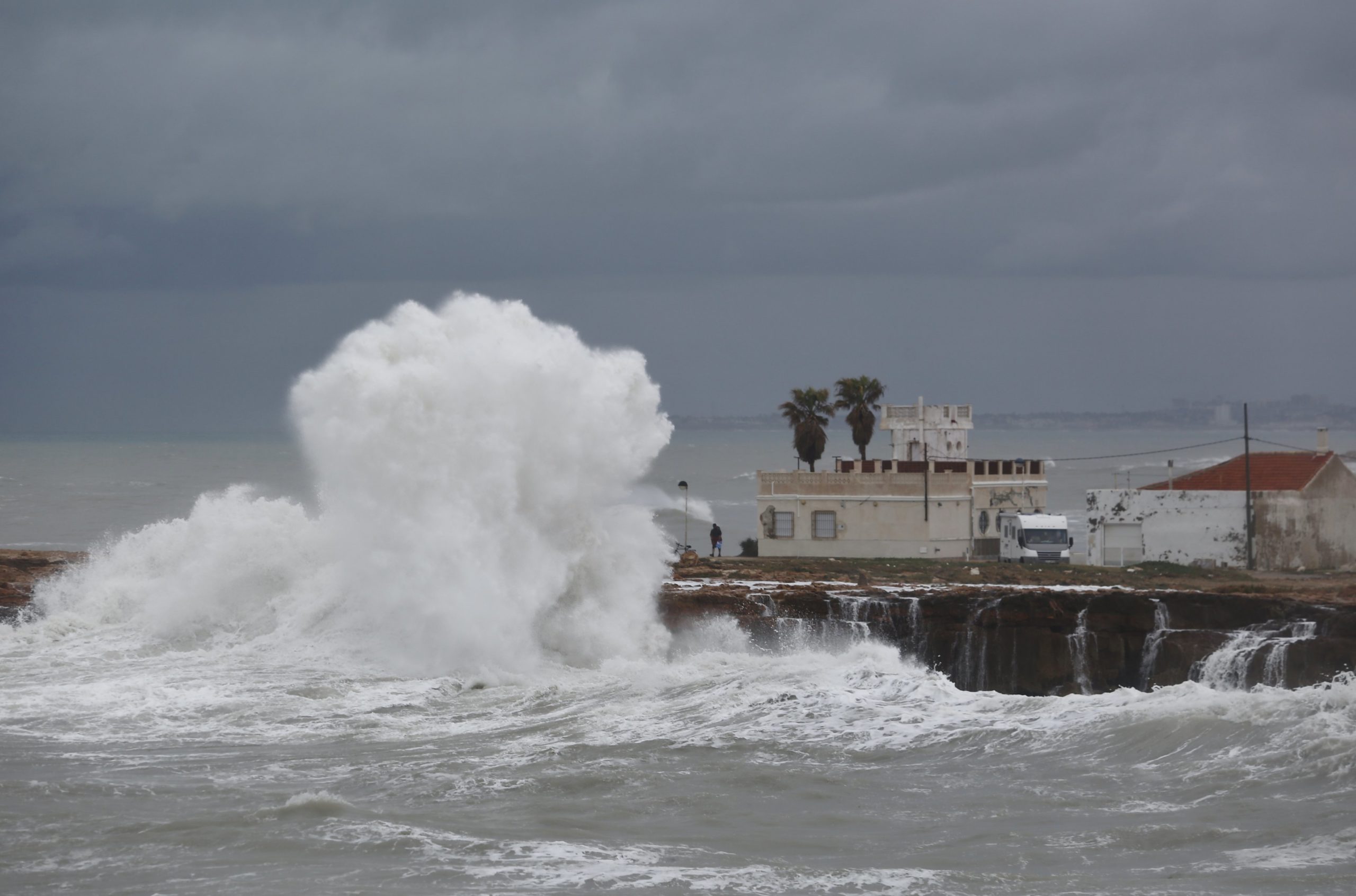 As for rail communication, it was also affected but to a lesser extent than air travel. The AVE trains were able to run but with average delays of between 10 and 15 minutes as snowfall caused them to reduce speed on the Villena-Almansa section to 160 kilometres / hour. The same happened on the conventional train routes through which Talgos and Euromed travel, which was also slowed by snow on the tracks.

The City Council of Xàbia closed the accesses to the coastal front in the town and traffic was halted along the roads that cross the Gorgos River. It was forbidden to drive along the coastline of La Caleta, Arenal, Spanish Marina and La Grava. In addition, people were evacuated from two and the Red Cross opened a shelter in the El Clot pavilion.

The Xaló River was also unusually high as it passed through the town that bears his name, so the riverbed was cordoned off. The flow of the river is similar to that recorded in 2007, when the rain storm destroyed the bridge over the Girona river in neighboring Beniarbeig. 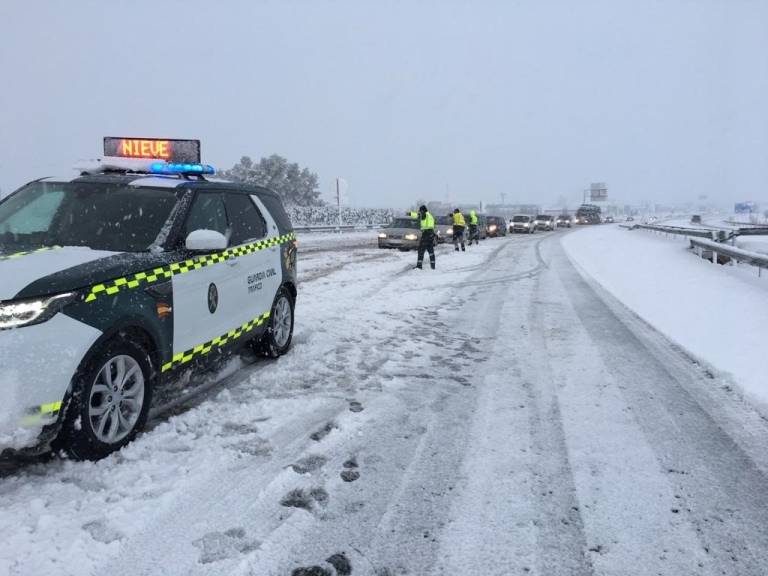 The snowstorm kept several roads in l’Alacantí closed last night, as well as the CV-800 as it passes through La Carrasqueta and the CV-810 that goes to Tibi, was also closed because of heavy snow, although initially no particular accidents have been recorded.

In terms of farming and agriculture, the storm has ruined up to 80% of citrus fruits in some areas along the Community’s coastline, according to the Valencian Association of Farmers. However, in the interior, cold, snow and water are said to be very beneficial, especially for the vineyards and the olive groves because it adapts perfectly to the needs of the vegetative cycle in the winter, recharges aquifers and swamps and helps with the fight against pests and diseases.

The storm also forced closure to the judicial headquarters of Villena, Alcoy and Ibi  with emergencies dealt with in other courts at Alicante and Elda.

On the second day of the first storm of 2020, baptized as “Gloria” by meteorologists, there were two fatalities in Valencia in Gandia and Moixent, both thought to be as a result of hypothermia.

A 54-year-old woman who died in Gandia spent the night in a park, after refusing facilities under cover that were offered by the Ayuntamiento. She was found dead yesterday by municipal services. The dead man in Moixent was found, still alive, just a few metres from his house, lying on the snow and with symptoms of hypothermia. The man died shortly afterwards despite attempts to revive him.

In Calpe, the imprudence of a 40-year-old Dutch man caused him to suffer serious injuries from an open leg fracture after being hit by a wave when taking pictures and recording videos of the storm.