He must have been contemplating the Orihuela Costa because it seems as though whatever Mayor Emilio Bascuñana and his councillors do and provide for that coastal stretch of the municipality there is one faction or another which criticises him for getting it wrong.

And such was the position following the gathering of residents on La Zenia Beach on Wednesday 25 December, and their spontaneous celebration of Christmas Day.

There was warm sunshine, sand, sea and lots of music as over 10,000 people, many of them dressed in Christmas costumes, spent a full day along with their mandatory food and drink of course, simply enjoying life, as they celebrated on the 27,000 square metres of coastline, with hardly room to drop a pin.

It is true to say that the beach was bursting at the seams with revellers travelling from as far afield as Albacete, Ontinyent, Cartagena and Murcia City to take part in an event that is growing in popularity year on year.

Having joined in the festivities for a dozen or more years myself, I personally no longer attend because I think that the numbers have now outgrown the location and together with a lack of management afforded by the local authority it is only a matter of time before there are serious accidents or other unwelcome incidents.

I also feel aggrieved that the local expat band “Just Brass” who were largely responsible for creating the impromptu event 17 or 18 years ago, were pushed out by the council as the gathering gained in popularity and the municipal corporation moved in, immediately replacing the ensemble with their own acts as they started to claim the event as their own and hanker for rather more of the organisational credit. 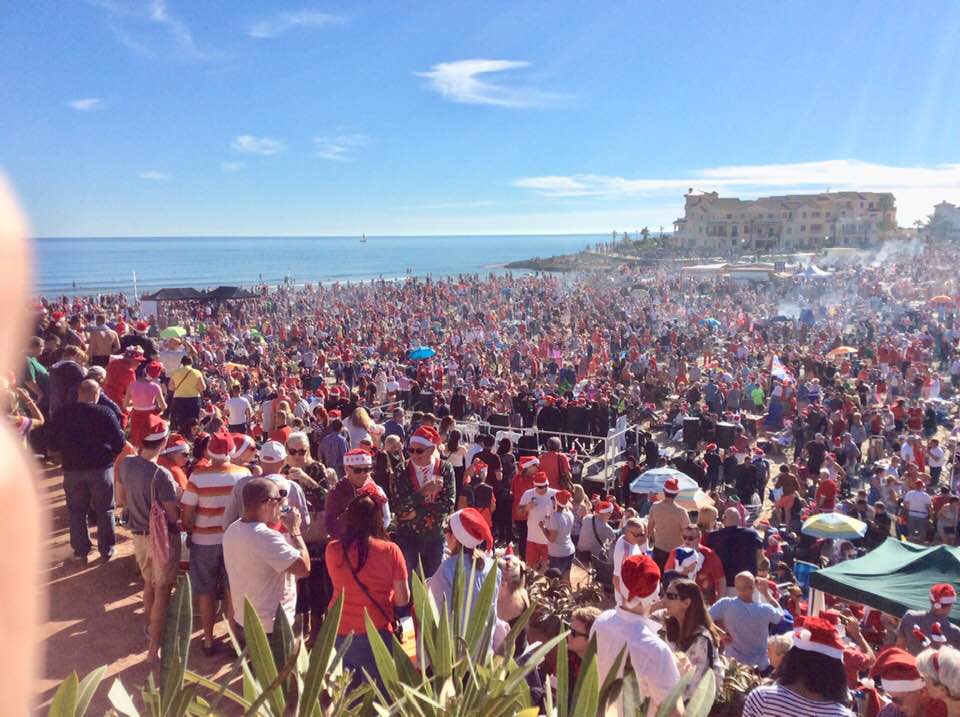 However it now seems to have turned full circle and to have become a victim of its own success with more and more groups and associations criticising the council for a lack of lifeguards, an absence of Policia Local and Guardia Civil as well as a failure to provide any sort of safety or first aid provision at what is now undoubtedly the largest annual gathering of residents on the coast.

Indeed on Wednesday afternoon it was difficult to keep up with social media as post after post criticised the local council just about every which way, as everyone agreed that it was la Zenia’s busiest 25 December ever.

One post said that “The Ayuntamiento should support this kind of thing so that there are fixed positions for the Red Cross, Civil Protection and Local Police. There should also be lifeguards on the beaches and an information point to which children should go if they are lost.”

There was also a great deal of criticism of traffic management, or rather the lack of it, with dozens of cars illegally parked on pavements and in front of private driveways and other vehicles travelling round and round in circles in their attempts to get as close to the beach as possible.

“And neither was there any representation at the event from the council,” it was stated, “other than a couple of assessors.”

One further criticism that appeared on the FAOC WhatsApp Group, albeit rather more supportive but still equally critical of the municipal board said “I just saw the news from all over Spain where there were many reports of people celebrating Christmas Day on the beach, but nowhere across the whole country were they doing so in the numbers that we saw at La Zenia, proving that this town hall is so inept that it doesn’t even know how to ‘sell’ on television.”

Personally I enjoyed a much more relaxed and tranquil occasion on Campoamor Beach where “Just Brass” have once again staked their claim and where I had the space to lay out my deckchairs, establish a good sized plot and enjoy a game of football with my grandchildren, without being jostled or trampled underfoot.