If you are one of the many subscribers here in the Costa Blanca that is using IPTV who has recently lost his signal it may well be because you are using an illegal provider.

Acting under instruction from the Naples public prosecutor the police said a Europe-wide network of hubs had been located that illegally distributed pay-TV content via web-streaming platforms that were being streamed to tens of millions of people worldwide.

The police added that the pirate services had over 5 million users in Italy alone and estimated annual revenues in that country of around EUR 65 million.

Subsequent raids coordinated by EU agencies Europol and Eurojust on Thursday targeted operations in France, Germany, Italy, the Netherlands, Greece and Bulgaria as they raided a network of alleged TV Pirates, seizing equipment and shutting down services.

Two Greeks aged 27 and 31, and said to be the brains behind the Xtream Codes Operation,  were arrested in Athens and Thessaloniki were they lived, and now face accusations of being the main orchestrators behind a European pirate IPTV service network.

The dawn raids were coordinated by Eurojust which said it had targeted an “international criminal network committing massive fraud” which was “jeopardising the existence of many legal providers of pay-TV”.

More than 150 PayPal accounts connected to the criminals were also blocked. Officers now also say that they will prosecute those who bought illegal subscriptions, although whether they will be able to track down the IP addresses of users is unlikely. I understand they are referring to the providers rather than the individual customers. 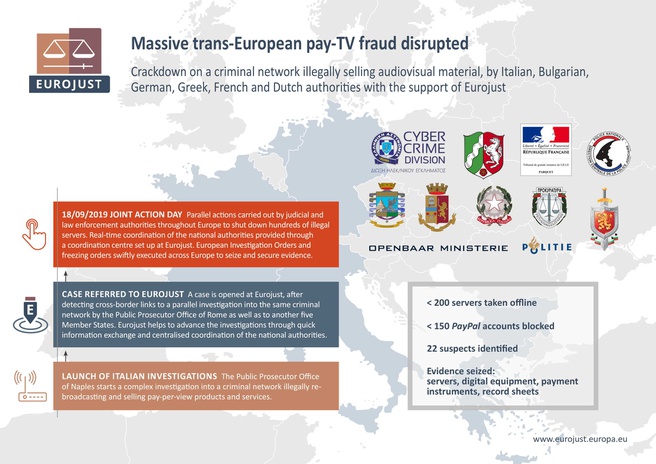 So, if you suddenly lost your connection to the Xtream Codes service, you were quite likely with an illegal provider. Obviously, there won’t be any refunds to those who prepaid for lengthy membership plans either.

Back in May, we saw how subscribers of OneStepTV.com lost their subscription money when the MPAA and ACE managed to shut down the platform and seize all its infrastructure. That said, if you want to subscribe to a pirate IPTV service, remember the risks and pick a short-term plan even if it isn’t the best value.

Whilst the Xtream Codes service won’t be returning any time soon there are still lots of other systems out there, many of which are quite legal, but so lucrative is the unlawful business that, according to sources, those companies that previously used Xtream Codes will now simply swap to a new panel, the interface between the channels and the client, change over the DNS, which would then see many systems back up and running within a few days, or even hours.

However there are also illegal IPTV providers who will use the raid as an opportunity to claim that there is an issue, your subscription has been lost and that you will be required to make full payment once again when they open a new service in a week’s time, thereby maximising their sales from the confusion brought by the raids.

But the majority of good services will continue to run. Only you know what type of service that you have!

But be reassured, IPTV is not over. Good quality providers will go to a new panel, they will swap over the server of DNS and, if not already, they will be back up and running very soon.