A £10,000 reward is being offered for information leading to the arrest of a murder suspect Bradley Blundell who may be using Ibiza as a place of safety. It comes as a teenager was cleared by a jury of killing a man outside a petrol station in Essex, England.

18-year-old Bradley Blundell is still at large, while two other teenagers have already been arrested and are being trialled.

John Pordage was shot in the chest following a confrontation outside the BP petrol station near the Army and Navy roundabout in Baddow Road, Chelmsford, in the early hours of August 5, 2017. The 34-year-old died in hospital a short time later, despite the efforts of members of the public and emergency services. 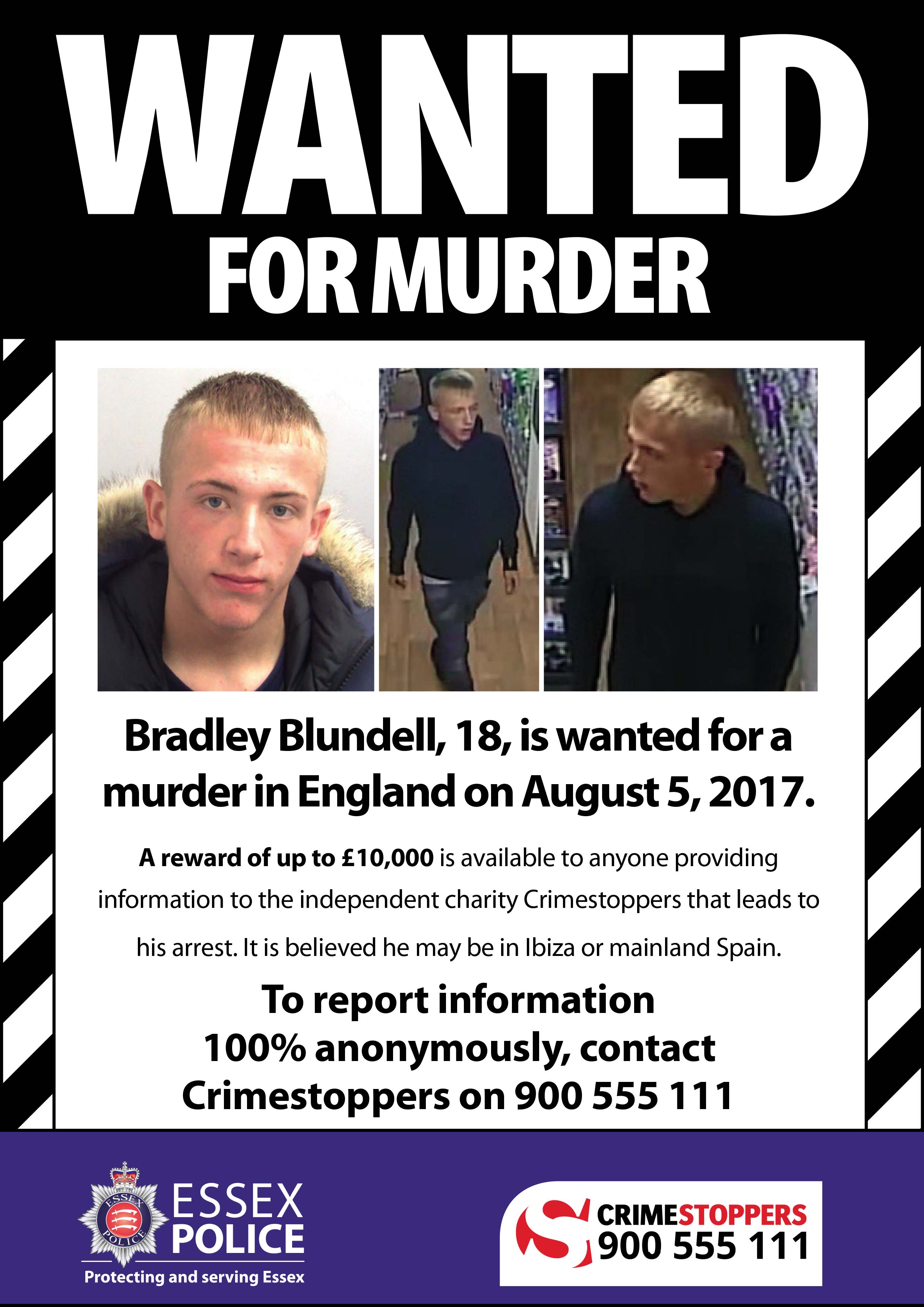 On Friday February 9, the jury found the 16-year-old was not guilty of murder or manslaughter. Stanley was found guilty of two counts of possession of a prohibited firearm, one count of possession of ammunition without a certificate and perverting the course of justice. He was found not guilty of two further counts of possessing ammunition without a firearm certificate. He admitted a charge of handling stolen goods, which was in connection with a stolen motorbike that had been collected from Brentwood in the hours before the murder.

The 16-year-old also admitted perverting the course of justice and handling stolen goods.

Following the verdicts and sentencing, senior investigating officer Detective Chief Inspector Martin Pasmore, of the Kent and Essex Serious Crime Directorate, said: “A thorough investigation was carried out and the evidence put to the jury, who have made their decision, which of course we accept. My thoughts are very much with John’s family and friends at what is a very difficult time for them.”

The pair will return to the court on March 2 for sentence.

Detectives are still keen to trace 18-year-old Bradley Blundell in connection with the murder of John Pordage. He was last known to be living in Chelmsford, Essex. DCI Pasmore said: “We’ve received information to say he may be using Ibiza as a place to hide, although it is not known where he is at present.

We have also had information to suggest he has friends who regularly visit Ibiza. We remain determined to locate Bradley Blundell and bring him to trial.“

“I appeal to Bradley to give himself up. We will never give up searching for him and we are liaising with the National Crime Agency and colleagues abroad to locate him”. “We also have a European Arrest Warrant in place to facilitate his capture and there is a reward via the Crimestoppers charity for up to £10,000 for information leading to his arrest”.

“Bradley and those advising him need to consider whether he should live a life on the run; never knowing whether an arrest is imminent. It makes sense for Bradley to come forward and face trial now. He will of course have a fair trial and have the opportunity to explain what happened from his point of view. I’m not pre-empting any result but the fact is that as a juvenile, if he were to be convicted and sentenced to imprisonment in the near future, he would still be freed as a relatively young man. The day will come when Bradley will face trial. It is very much in everyone’s interest to do that sooner rather than later.”

To be eligible for the reward of up to £10,000, please contact the Crimestoppers charity 100% anonymously. Anyone in the Balearic Islands or Spain who has information about Blundell’s whereabouts can call Crimestoppers on freephone 900 555 111 or use the anonymous online form at Crimestoppers-uk.org