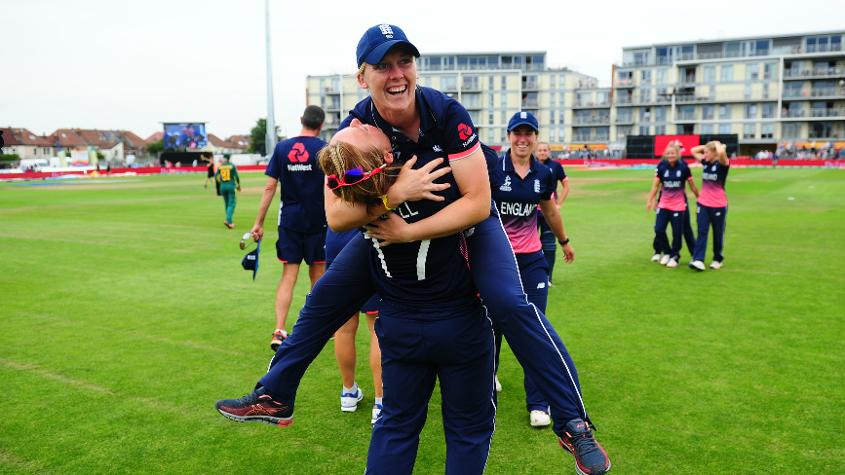 Contributions from Fran Wilson, who made 30, and 27 not out from Jenny Gunn proved crucial in the nerviest of finishes.

England has won both of the Women’s World Cups held on home soil and will have the chance to make it a hat-trick on Sunday at Lord’s after claiming a dramatic two-wicket win over South Africa in the final over of the semi-final in Bristol.

What looked like being a straightforward victory when South Africa was restricted to 218 for six, proved to be anything but that as England faltered in reply only for Anya Shrubsole to hit the winning runs with two balls to go in a thrilling encounter.

Contributions from Fran Wilson, who made 30, and 27 not out from Jenny Gunn proved crucial in the nerviest of finishes.

After losing both openers fairly cheaply, Sarah Taylor and Heather Knight had come together and put on 78 with England seemingly on course for a comfortable win.

However, the pair fell within the space of eight deliveries, quickly followed by Nat Sciver and South Africa sensed blood.

Wilson’s knock got England back on track with Gunn doing a sterling job at the other end, and despite losing Laura Marsh in the final over, Shrubsole saw them over the line.

As a result England will face the winner of Thursday’s second semi-final in Derby where defending champion Australia takes on an India.

Regardless of the opposition, the host nation will take plenty of confidence from a seventh straight victory in the tournament, with the bowlers delivering after the batters had shone in the first meeting between the sides.

South Africa was desperately unlucky however, and despite half-centuries from Mignon du Preez and Laura Wolvaardt, it didn’t quite have enough to reach a maiden World Cup final.

Player of the match Taylor admitted it had been an emotional finish for England team watching on.

She said: “It’s been a long journey for all of us. I think it’s just all emotion at the moment. We knew we had the depth in our batting and it was a great shot from Anya to get us through and Fran and Jen batted brilliantly.

“South Africa played well and to lose like that. It’s heart-breaking, we’ve been there before and we know what it’s like.

“The support we have had has been fantastic, we just want to say thank you as a team. To get through to the final is amazing.”

After electing to bat first South Africa was in early strife when Lizelle Lee was clean bowled for seven by Shrubsole, having already survived one leg before shout thanks to a review.

Trisha Chetty was next to go, victim of some outstanding glove work behind the stumps from Taylor after venturing outside her crease off a wide from Sciver.

Wolvaardt was ticking along at the other end, and she and Du Preez came together for the best partnership of the innings, adding 77 for the third wicket.

But Knight’s decision to bring herself on proved to be a masterstroke, removing Wolvaardt for 66 as she swiped across the line before Marizanne Kapp was run out for one in the same over.

They put on 42 but just as it looked like Van Niekerk was hitting her groove she was also run out, her bat popping up as she tried to get back following a mix-up.

Chloe Tryon followed soon after, and while the final pair of Du Preez (76 not out) and Sune Luus (21 not out) added an unbroken 48, the final total looked to be well short of what was required.

Lauren Winfield and Beaumont put on a quick-fire 42 at the top of the order, before both fell to Ayabonga Khaka, who was the pick of the South African bowlers.

England looked in control with Taylor and Knight at the wicket but after they fell panic set in until Wilson’s intervention.

Even so it came down to the final over, with England needing three off Shabnim Ismail, who dropped a tough return chance from Gunn off the first ball.

A single later and Ismail removed Marsh, with two still required, but Shrubsole hammered her first ball through the covers to the elation of the home crowd and the distress of South Africa.

Skipper Van Niekerk said: “We thought we were 30 short, but knowing my team, we went out there believing, and I’m really proud of them.

“You always have to believe that you can win a game of cricket, and [after Knight’s dismissal] I said to them that it was very close – I saw the score on the board – and with our bowling attack, anything can happen.

“We hope we made everyone proud.”