Orihuela’ s Councillor for Tourism, Sofía Álvarez, presented the second edition of the Gastronomic Sicted last Tuesday, a quality improvement project for tourist destinations promoted by the State Secretary of Tourism, to be held in both the city and at venues on the coast from 12 to 17 June.

Álvarez said that she is delighted with the standard of the participants which feature some of the very best restaurants in the region and which is sponsored by Carlos Corredor, the director of the Alicante Gastronomic Guide. 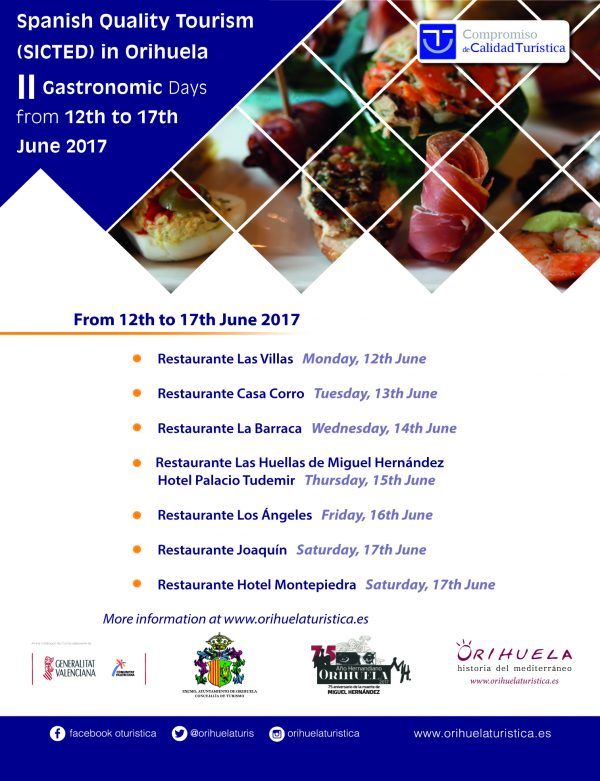 Each of the restaurants will offer a special menu throughout the week, whilst on their specific days their events will be complimented with live music.  The verses of Orihuela’s celebrated poet Miguel Hernández will also be featured on each of the menu’s.

Álvarez also called on restaurants throughout Orihuela and the Orihuela Costa to become involved and to enter into the next edition of the gastronomic experience in which the region has the 3rd highest number of distinctions with 58 awards.

She said that “we hope this to be a gastronomic celebration at the local level and we invite all residents, visitors and tourists to participate actively during the week.”

Meanwhile, Carlos Corredor said that “there would be a large variety of local foodstuffs and dishes available during the week including artichokes, seafood and rice”, adding that “Orihuela is making a clear commitment to gastronomy.”