The latest crusade being undertaken by FAOC (the Federación de Asociaciones de Orihuela Costa) is with regard to the state of the roads in and around Avda Villamartin, the carriageway that connects the coast with Villamartin and San Miguel de Salinas and which also leads directly to La Zenia Boulevard, which receives in the region of 13 million annual visitors. 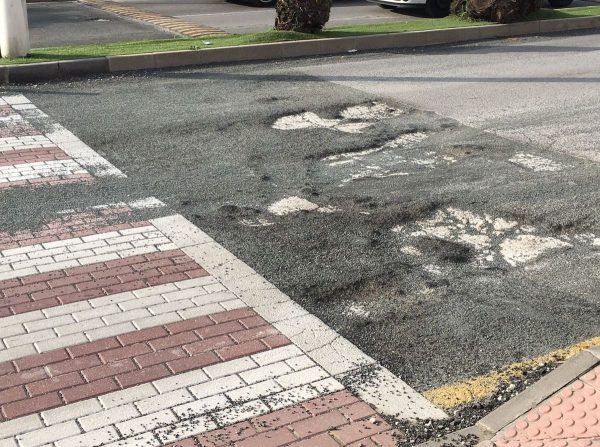 The main road toward La Zenia BoulevardAfter an appeal to local residents they have now compiled a dossier of dozens of photo’s, all depicting the appalling state of this well used thoroughfare.

The images show the same large potholes, broken pavements and other damages that have been repaired time after time but continue to reappear because of the inferior way in which the repairs are carried out.

They tend to last for about a month but when they do reappear   it is usually with a vengeance, with the added hazard of gravel and even larger potholes.

Spokesperson Tomas Moreno says that the work being carried out is only patchwork and is extremely sloppy. Potholes are dangerous and we should take them seriously. They cause damage to vehicles, which is expensive to repair, and they cause cyclists to swerve into the path of other road users to avoid them”.

There is a widespread feeling that the Orihuela Costa’s roads are in a bad state and it has a poor reputation in comparison with other parts of the area, but simply spending more resources on resurfacing roads rather than filling in potholes can be a better use of money.

It is clearly worrying that the Orihuela council are not fixing dangerous hazards.

128 random drug and alcohol tests on drivers taken in Torrevieja