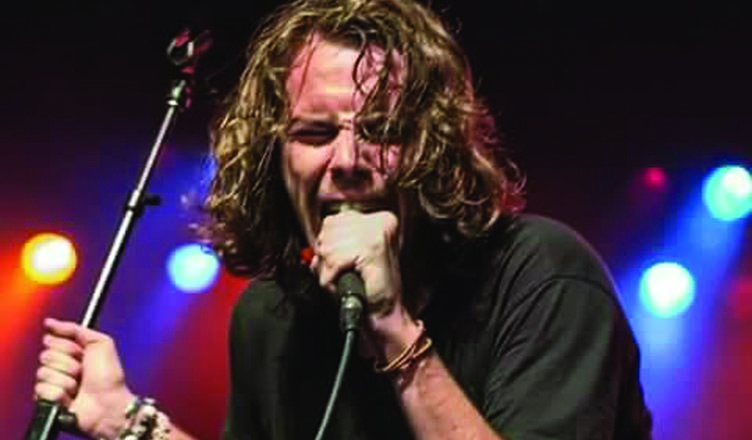 The Leader Newspaper was lucky enough to meet with Mark Daly and get an EXCLUSIVE interview with the singer, songwriter and all round International Star.

You may remember that Mark was plucked from obscurity when performing with his band The Voodoos in The Bushwacka bar on Cabo Roig.

He was “spotted” by the world famous NIgel Godrich, the Producer of the Mega Group Radiohead.

So what has Mark been up to since then? Well, he has extensively been touring the United States with the Voodoos performing in mega Stadiums to audiences or 100,000 plus.  Last Month they played a gig in Portugal.

He has also been touring in Ireland, his home country. Together they have won the MTV EMA Award for the Best Original Song in Europe entitled ‘Yesterdays Future’.

Why is Mark here in Cabo Roig Spain now?  Well, he is also starting a single career and he was holding a pre release launch of his New Video in Slievenemon Irish Rock Bar on Cabo Roig strip.  The Video has been independently funded and features Mark’s song ‘The Hearts Reminder’.

Besides Mark the raunchy Video stars Aaron McCarthy and the interestingly named Ballsy Wallsy.  It seems Ballsy is a rising star as an Actress and Model because she is about to sign a contract with Apple.  So Mark really is moving in high circles.

As well as launching the Video Mark did a couple of Gigs with local supergroup SNOWBLIND.  Fronting Snowblind he played to a packed house on Friday at Slievenemon Irish Rock Bar and then headlined the prestigious Costa Blanca Custom Bike Show at Phoenix Nights in San Miguel.

Never having played with Snowblind before the Group played like seasoned artists and blasted out such numbers as Born to be Wild, Hey Joe and Marks very own Biker song a Tribute to the Blue Angels.

The Official Launch of the Music Video will be on Thursday when it will be released on all Social Media platforms as well as issued to Radio Stations Worldwide. A UK Tour with Geoff Tate (Queensryche) will also happen next year.  So, the one to look out for following it’s launch on Thursday ‘The Hearts Reminder’. You saw it here first.

We wish Mark all the best in all of his forthcoming ventures.

How to identify a driver in the event of a fine