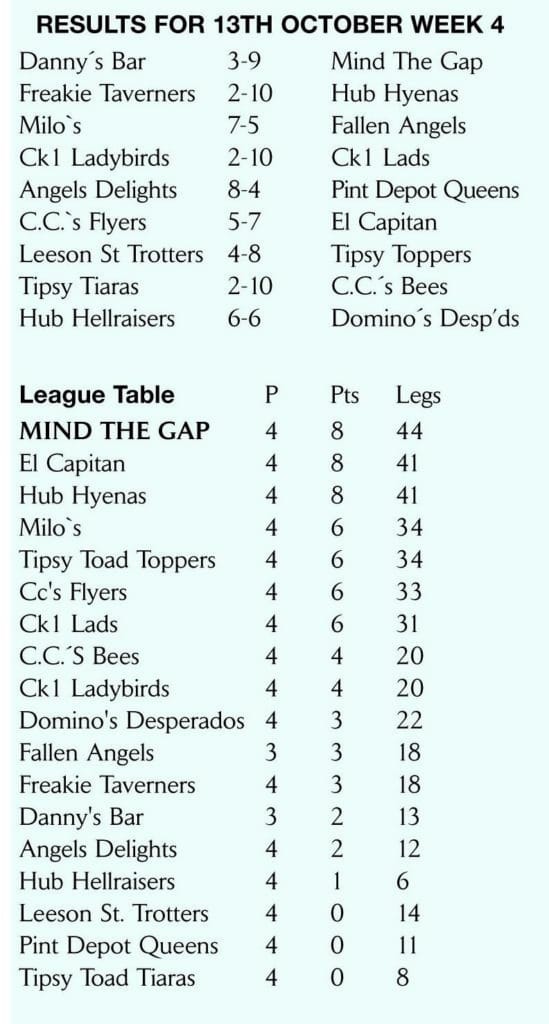 A good all round Hub performance resulted this convincing away victory. Hyenas taking all 3 triples, Dario Sierra headlining with a D8 and 116,125,140. Jay Wilkinson, D6 and Mark Ellis D20, making it 0-3. The same two adding the 1st pair. John Bowden, who else, gained Freakies first point with Mitch Halliday on a 46 out. Andre Wing 95 concluding the pairs on D20.

Javi de Gea made his mark on this match with 3×100,120, 3x 80+ and a singles victory for POTM. Raul Rocamora contributing 2×100,95,85 and 2 outs. The game wasn’t won until the 12th leg Cian Garcia the hero. The Fallen ones had in fact gone ahead 4-5 through Billy Dolling, earlier hitting 134 plus an out. but couldn’t capitalise, Milos taking the remainder. Darren Foster Angels POTM, with a bucket load of 80+’s and 140.

At 3 apiece, this match had draw written all over it. Not so as Delights went into overdrive winning 5 of the available six 2nd half singles, for the match and points. Two pretty decent outs from Queens, POTM – Marie Cummins, T14,D20 and Marge Morgan T17,D14, came in the 1st half.

The Bees brought along some new faces to the league as part of a team that have only played together for 3 weeks.  Captain Liam Lumb egged his lads on, after all they were only playing a ladies team, and was confident of a sound victory when he secured the Bees first point.

The Bees got stung in the 2nd triples though despite POTM Dave Jennings rattling off 156, 177 and 95 as POTM Simone de Lacy sent her arrow straight into D16, first chance. Tiaras only other point came via Lisa Ivill´s D3 against a frustrated Simon Bantleman in the singles.

A few other chances were squandered but the Tiaras scored well, Sharon Crane 121 on her first throw and Tracey Simpson a ton, all others scores of 80 or more. Bees other big shots came from Paul Christopher (2 x121, 2×100), Bantleman (105) and Bruce Admiraal (100).