The LeaderPutting YOU at the Heart of the Community
Sign in / Join
Subscribe
Home Costa Calida Cartagena New Green Filters Will Remove 60% of the Nitrates from the Mar... 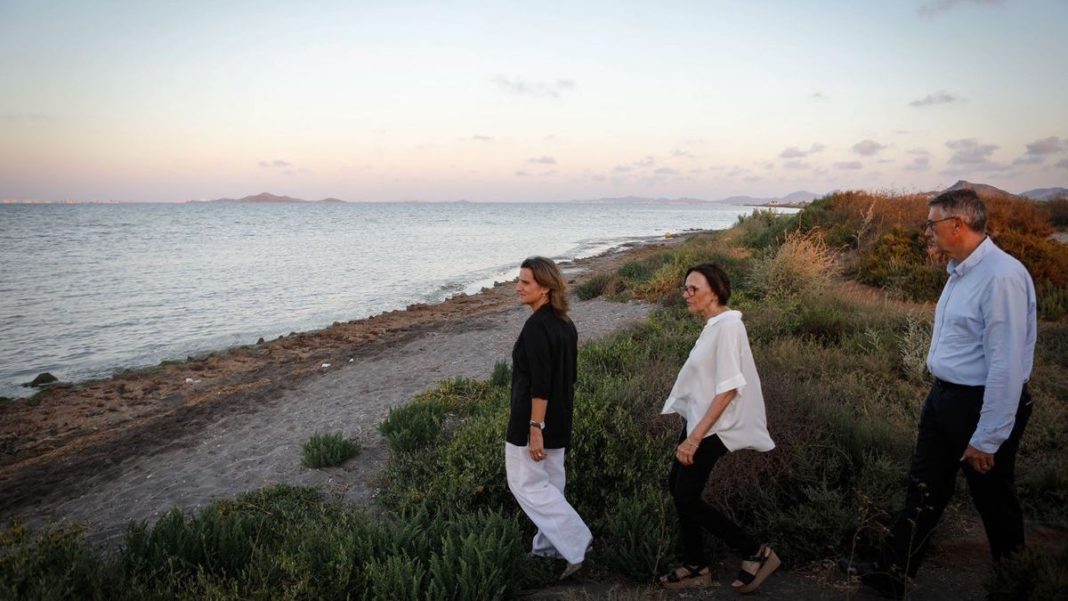 As a new study was revealed this week that shone a new light on the problems affecting the Mar Menor, Spanish national government delegates have visited the area and proposed a new plan to deal with the pollution, namely, a new network of semi- natural wetlands will plug the entrance of contaminated water from the Campo de Cartagena underground aquifer to prevent it from reaching the Mar Menor.

The Ministry for Ecological Transition intends to transform 300 hectares around the lagoon that will be used to clean 5.3 cubic hectometres of water that will be pumped from the subsoil per year. This would eliminate 968 tons of nitrates that are dumped into the lagoon annually, that is, eliminate 60% of these toxic compounds that cause the proliferation of macroalgae along with other elements such as phosphates.

This plan is the line of work that the department run by Minister Teresa Ribera has chosen to lower the water table of the Quaternary aquifer under the Mar Menor basin. A natural solution that differs from the approach of the regional government, which was committed to redirecting groundwater to a plant to eliminate nitrates and reuse the water for irrigation in the region. The Ministry intends to stop the entry of two thirds of the flow that seeps into the lagoon from the aquifer.

The new eight wetlands, five of them with associated green filters, projected by the Ministry in the coastal strip are part of the green belt raised around the lagoon to reduce the entry of pollutants. Minister Ribera visited the mouth of the Rambla del Albujón on Thursday afternoon, where a widening of the final section of the channel is proposed to filter the flow from the aquifer and retain runoff during episodes of heavy rain.

The head of Ecological Transition stayed in the Region of Murcia until Friday to present the progress that the Ministry has made in recent months within its plan for the recovery of this ecosystem, which has seen investment of more than 450 million euro, and to inaugurate the new technical office that will coordinate all the actions of the National Government department with the Community in Murcia, which will be located in a headquarters of the Ministry of Finance in calle Pinares.

The Ministry will buy agricultural plots from the current owners or pay the owners a ‘rent’ for them in order to promote these spaces with adequate vegetation for the retention of these compounds. The actions, as stated in the presentation this Thursday of the green belt project around the Mar Menor, would begin by using the land surrounding the Las Salinas de San Pedro park and the desalination plant, continuing with the intervention on a plot of 44 hectares in the area of ​​La Calavera de San Javier.

The Ministry plans other actions in the Rambla de Miranda, playa de la Hita in Los Narejos, in the vicinity of the Los Alcázares treatment plant, Torre del Negro, la rambla de Ponce (to the south of the lagoon) and other filters at the mouth of the Albujón.

The southern section of the basin, located mostly in the municipality of Cartagena, presents a loss of traditional topography due to irrigated agriculture and the proliferation of plots without the right to irrigation. The Ministry wants to take advantage of these spaces to achieve several objectives: retain the pollutants that reach the lagoon, some from the Sierra Minera and, on the other hand, stop the runoff that damages the coastal sections of the southern basin.

The technicians of the Ministry have designed a set of eight renaturalisation areas and some 600 hectares of surface that will allow the different natural spaces in the south of the Mar Menor to be reconnected at an ecological level. These spaces would be linked to other natural wetlands on the coast such as El Carmolí, Lo Poyo and La Hita.

To this end, larger areas have been designed (around 100 hectares) and connecting linear corridors about 150 metres wide based on plots reported for illegal irrigation. The ultimate goal will also be the recovery of land that improves sediment retention during flood episodes.

Very scarce habitats of community interest will also be recovered, as well as species in a critical situation such as the asparagus from the Mar Menor or the Jara from Cartagena. These actions will be accompanied by the restoration of the mining streams to stop the entry of heavy metals into the lagoon.