Arkady Nikolaevich Ponomarev is one of the richest of the state Duma deputies in the Russian region of Voronezh.  He is a member of United Russia, Vladimir Putin’s party, and the founder of Molvest, one of the country’s largest dairy product companies. Ponomarev has an income of 199.49 million roubles – about 2.6 million euros a year.

Ponomarev is one of the seven Russian politicians and businessmen with properties in Spain who have been sanctioned by the European Union for their links with the Kremlin. The Spanish daily newspaper “El País”, has linked the deputy to four properties in Alicante, which he has not been able to access since 23 April, for having voted in favour of the resolution with which Russia recognized the provinces of Donetsk and Lugansk as independent, the two areas that make up the Donbas region where, since the end of March, Putin has focused his war effort in Ukraine.

A few weeks ago, Arkady Ponomarev himself acknowledged in the Russian newspaper, the Daily Storm, that he had been sanctioned by the EU preventing him from accessing his homes in Spain. Despite everything, the deputy and businessman is not at all concerned.

Ponomarev told the Daily Storm that he did not even know the condition of his properties, whose ownership he declared to the Voronezh Duma. He claimed that he acquired the properties only two years ago, so, according to the Russian media outlet, he is not bothered if the Spanish government finally decided to “expropriate” them.

“A similar apartment in Moscow or Sochi is much more expensive,” Ponomarev told the Daily Storm. And even if I lose my properties in Spain, I will still vote the way I voted. This is not a vital issue for me. It’s the same as if someone damages my car, it’s a shame, but so what? 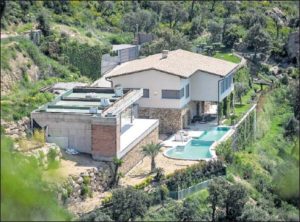 Alicante, and the Costa Blanca in particular, is one of the favourite places for Russian citizens to settle in Spain. In fact, in the province there are about 25,000 of it’s citizens registered. They can be found in luxury developments such as Altea Hills, an urban conservation community where it is estimated that around 25% of the residents are of Russian nationality.

Among his neighbors is a senior official from the most important gas company in Russia and the daughters of the former Russian president, Mikhail Gorbachev. In 2019, a television program claimed that the president of Russia himself, Vladimir Putin, also has a home in this area where he previously spent his summer months.