The presentations got under way at a ‘Red Carpet’ event held at The Emerald Isle, La Florida, where Entertainer Stevie Spit – Brian Thomas McLeod – was belatedly presented with his BEM by His Excellency, British Ambassador Hugh Elliott.

“It is the biggest day of my life,” Stevie, who began singing at Butlin’s, aged 7, told The Leader.

Honoured in the Queen’s New Year Honours List in 2019 for his services to charities in Spain and abroad, Stevie, 50, was denied an opportunity to meet with Her Majesty at Buckingham Palace, due to coronavirus restrictions.

“Stevie has done a huge amount for the charity sector in the Orihuela Costa,” said British Ambassador Hugh Elliott. 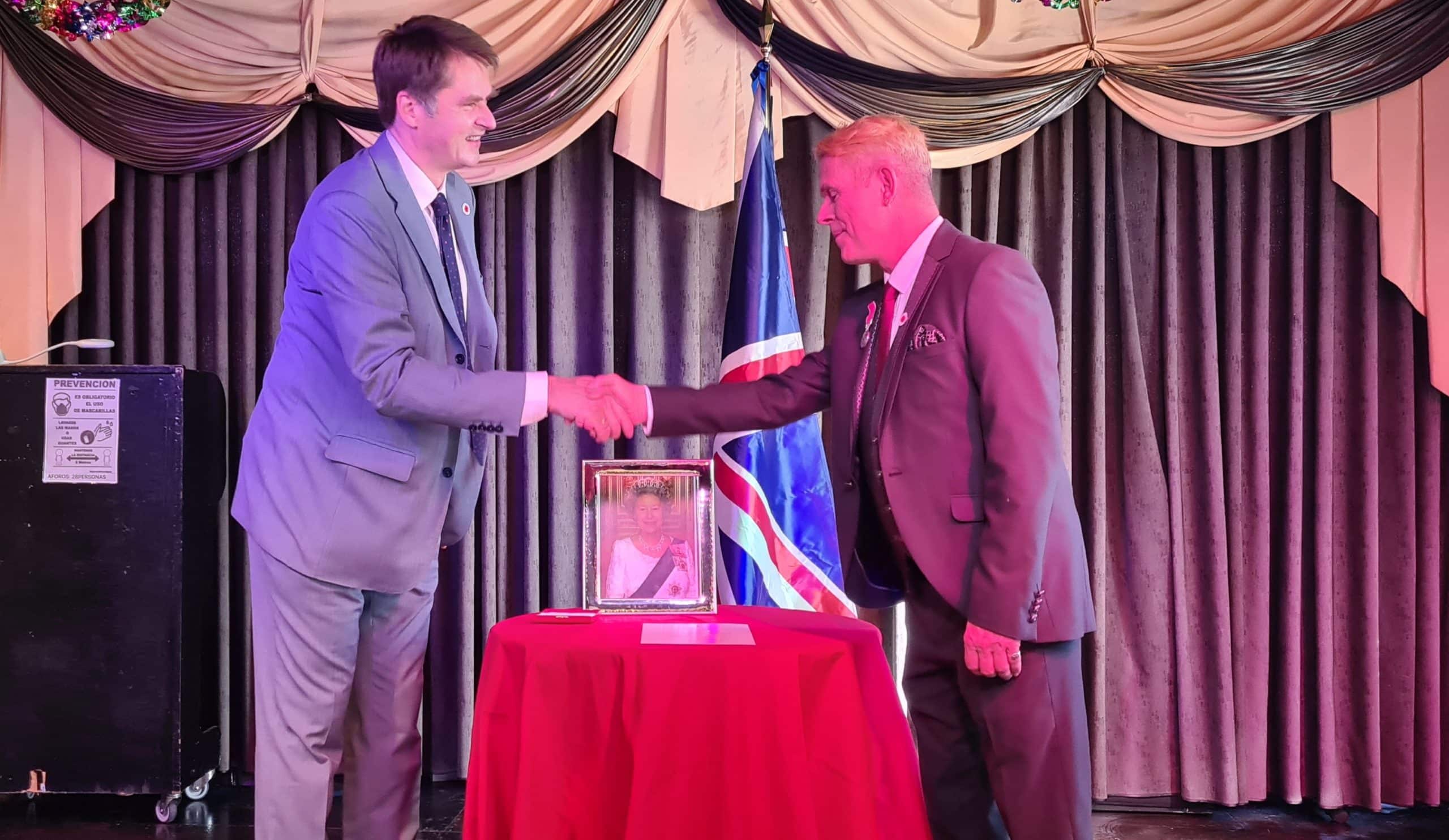 Stevie, who has been an entertainer in the Costa Blanca, Costa Calida and throughout Spain, including many performances at the iconic Benidorm Palace, has raised thousands of euros for the Elche Childrens Centre and the Apanee Torrevieja, amongst a plethora of others.

Glasgow born, he even went undercover to Afghanistan in recent years, where he performed in shows to raise desperately needed funds for war-torn children, under the radar of the Taliban.

“I have been very, very impressed for what he has done in Afghanistan – it is incredibly courageous – and I was flabbergasted to hear that. It’s absolutely fantastic”, said Hugh Elliott.

The BEM presentation took place indoors at The Emerald Isle, La Florida, Orihuela Costa, at a private ceremony, by invitation and with 38 guests in attendance, including his Aberdeen based mother Pearl, who works in Victim Support, and nephew Jordan, who both arrived the previous day from Scotland. 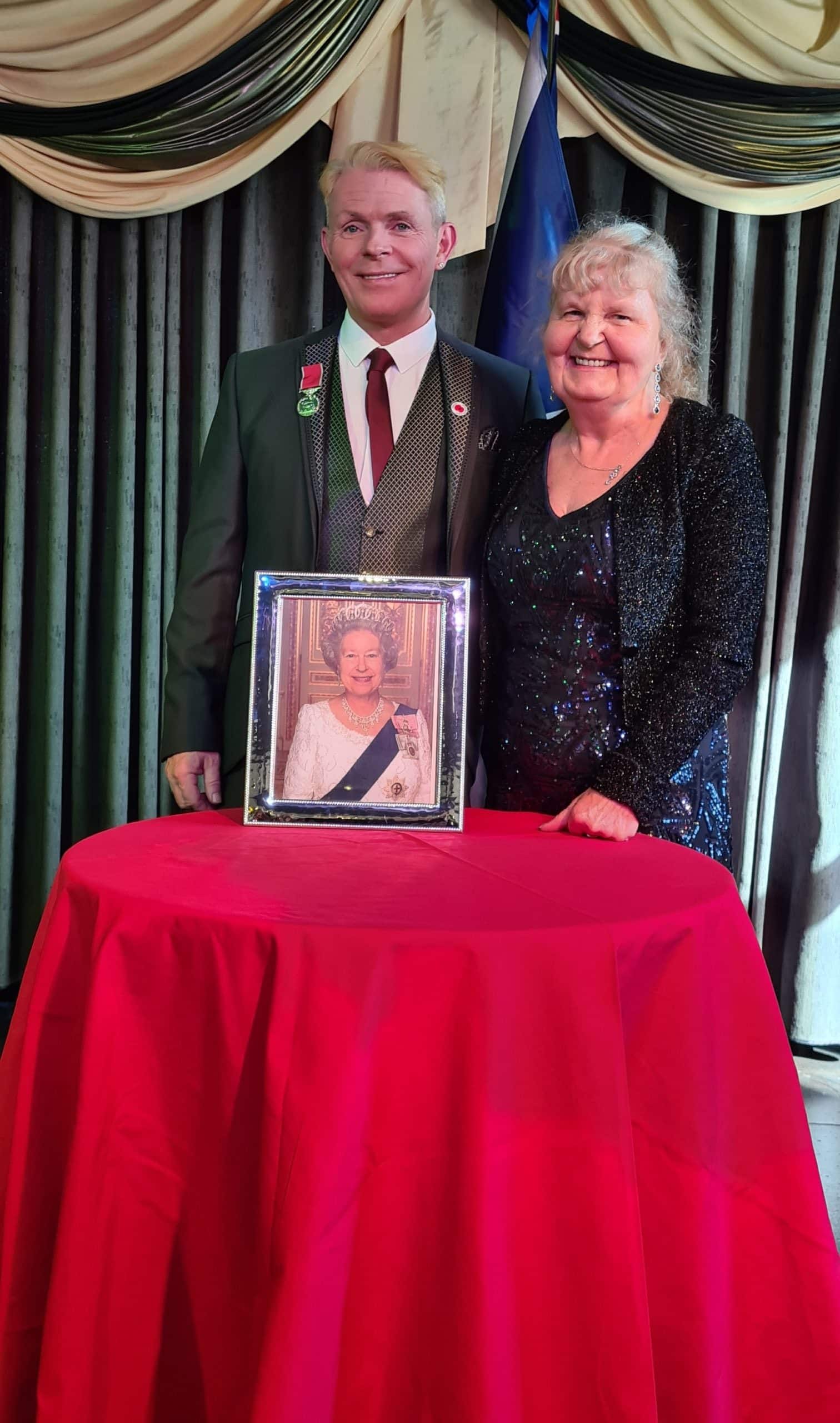 Glasgow born Stevie said: “I thank you very, very much for all coming. A lot of people here today are involved in the award.”

Stevie revealed that he thought the BEM award was a hoax, having been informed that he was to receive the honour, while on holiday in Benidorm.

“In 2019 I was in Benidorm with Nanny McPhee (Eileen Gleave), trying to have a stress free week away – and was told the British Ambassador was going to call me.

“I told them I was on holiday – as I thought it was a joke! But when I spoke to Hugh Elliott he told me what the situation was.

“I hung up. And Nanny said ‘who was that’? I answered ‘I’ve no idea. It was a complete surprise to me.

“I had no idea I had been awarded the BEM in the Queen’s New Year Honours List. I had to keep quiet, until December 27, 2019,” said Stevie.

“It is all the charities that have given me the opportunity to receive the BEM,” said Stevie.

“My mum is here and it was her who gave me the best advice. She said to me years ago to concentrate on my charity work  – and I took her advice,” said Stevie.

“My charity work has taken me to a lot of dangerous places – and I never dreamed it would one day culminate in this,” added Stevie.

British Ambassador Hugh Elliott said: “I have never done this before with an entertainer. We are here on behalf of Her Majesty The Queen to present the British Empire Medal to Brian Thomas McLeod.

“I’ve had the pleasure to hear him sing in Orihuela Cathedral – and what a pleasure. We have people here today that have benefited from his charity work, including the Royal British Legion. It is a pleasure to welcome you all.

“It is the second time I have met Stevie – we’ve been crowd sourcing him – I have the microphone and he hasn’t! He’s feeling a bit uncomfortable.”

Stevie, grabbed the mic and joked: “I think I’ve lost the medal!”

British Ambassador Hugh Elliott added: “I have been speaking to Stevie’s mother and she told me he had to be hauled off the stage, aged 7, when at Butlin’s.”

As Stevie Spit’s long awaited moment arrived, British Ambassador Hugh Elliott said: “I am very pleased on behalf of Her Majesty to present The British Empire Medal to Brian Thomas McLeod.” As Stevie bowed to be awarded the honour.

But on a busy day for the Ambassador, later that afternoon, Hugh Elliott then went on to make a second presentation of a British Empire Medal to Maureen Payne, President of Age Concern, Costa Blanca Sur, at the Restaurante Villasalada in Torrevieja.

HMA was joined at the ceremony by the Mayor of Torrevieja Eduardo Dolón, and the Councillor for International Relations, Gitte Lund, along with many of Maureen’s friends and colleagues from Age Concern, who also were generous with their compliments.

Maureen received her British Empire Medal in recognition of her charitable work, serving for more than a decade as President of Age Concern. Arriving in Spain in 2003 she has been dedicated to all aspects of the Age Concern organisation ever since and, after a period as Vice President, she has now served as President since 2009, a position she continues to hold.

“She still gives up a huge amount of her time to ensure the smooth running of all the different aspects of the organisation,” said the Ambassador as he offered her congratulations.

Age Concern has a team of over 150 volunteers who are dedicated to improving the lives of seniors in many different ways. As well as making home visits, providing a reading library and friendship services the organisation also organises free Spanish lessons for the local community.

The British Empire Medal is awarded to individuals in recognition of their meritorious military or civil service.

What is the honours system?

Often criticised, but the British honours system remains as the principal way in which the United Kingdom honours bravery, achievement or service. Along with the Queen’s Birthday Honours list they are the most significant announcements of civilian and military gallantry awards in the UK.

How are people nominated and what for?

Anyone can nominate an individual for an honour and can do so via the government website here. Nominees are chosen based on three criteria : Degree of risk, awareness of danger and persistence. Further criteria for service are awarded for making a difference to their community or field of work, Enhancing Britain’s reputation, long term voluntary service, innovation and entrepreneurship, achievement, improving life for those less able and displaying moral courage.

What types of honours are there?