If you have read any of my articles before you will know that I get a buzz from beautiful scenery. Last week we went and stayed in a Casita (little house) in the hills by Finestrat. We have stayed in this area before, but in a Yurt, and then just for one night. This time we were staying for a week to enjoy the scenery and nature.

The Casita was lovely, beams, old stone, modern bathroom and kitchen, and the best thing was sitting outside enjoying the stunning views of Mount Puig Campana and the valley. 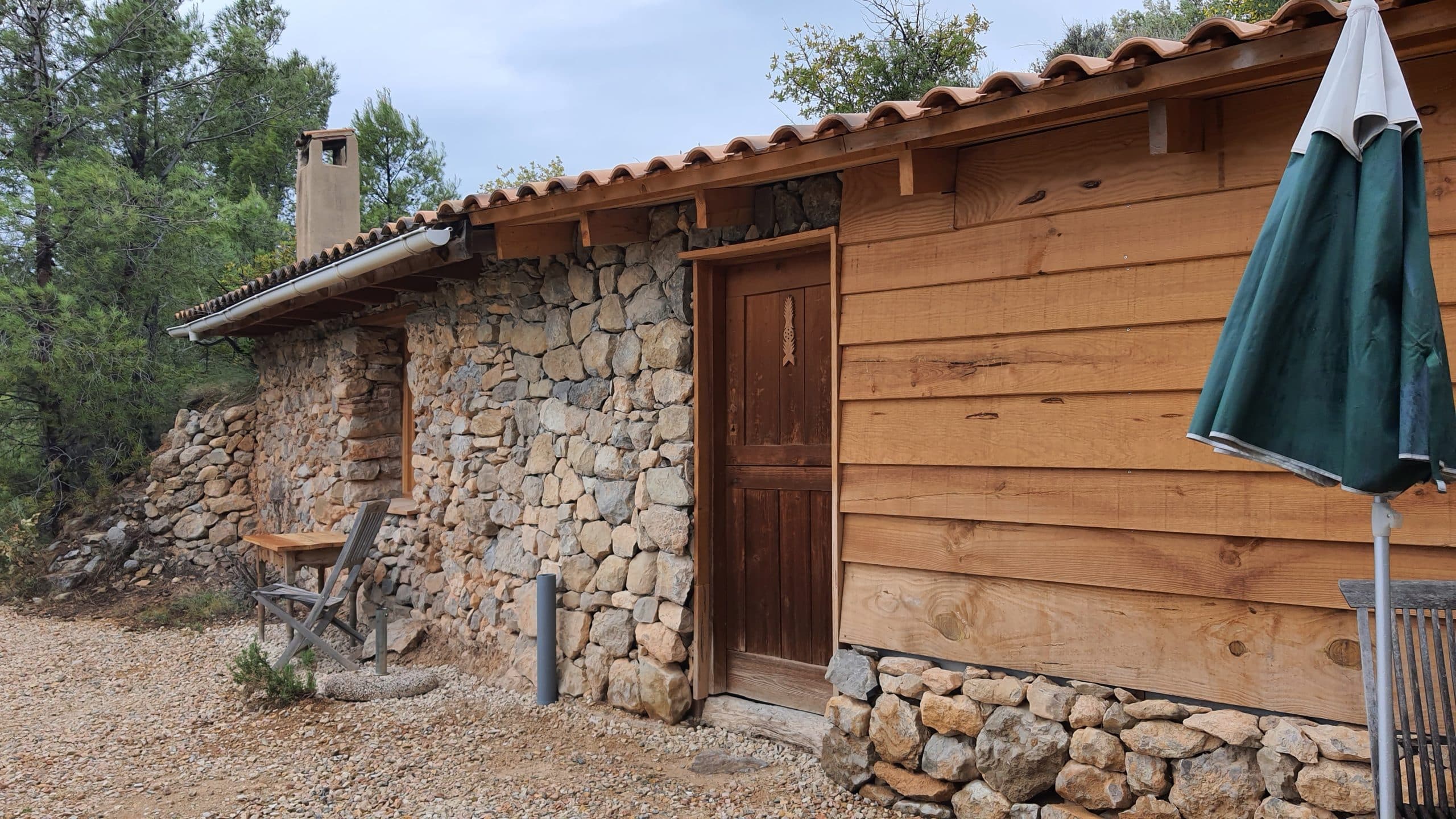 We decided to take a picnic and go for a walk to the Sierra Bernia as we had not been before. The road to the area was absolutely amazing – but scary. It was incredibly steep and winding. It took us higher and higher and when I dared to look the scenery took my breath away.  We were so high up we looked all over Benidorm, Albir and Altea, and it was so awesome.

When we parked the car I must say I was a bit shaky as I am not good on roads going up and around hills and mountains with huge drops to the side, but it was so worth it, the views are some of the best I have ever seen.

There are a few circular walking routes from the car park and we wanted to do one of them. We past a few cottages and I was so envious of the spectacular views the people had living here, it was almost like looking out of an aeroplane after take off or landing, we really were that high up.

The walk we had chosen is one of the most beautiful routes in this area. It takes approximately 4 hours and is medium difficulty. It is highly recommended for the views and you pass the Fort de Bernia and the  Forat Bernia (tunnel) which passes through the mountain from north to south, and one side to the other.

It is a remarkable natural formation and is around 20 metres long. It is low so either crawling or stooping will get you through. The scenery on either side is in total contrast of each other. Further on you can come upon a cave with ancient cave paintings inside.

All through this route the scenery is dramatic and awesome. A must to see if you are a good walker.

If these tough routes are not for you but you enjoy walking then why not try the Albir Lighthouse walk.

The Lighthouse perches on a high rock at the end of the Sierra Helada Natural Park.

It was built in 1863 with a treacherous winding pathway close to the sea, which made it difficult to get to.

In the 1960s a new path was made so now there is a good tarmac walking path which is wrapped around the edge of the hillside and the sea, with lovely views of Albir Bay, and out to sea. The walk is a little over 5k round trip – don’t forget to take water. It is well worth doing.

Views are of Albir, Calpe Rock and Sierra Bernia. There are various notices giving details of plants and flowers and details of an old ochre mine with still some of the ruins still there and the entrance to what was the actual mine. 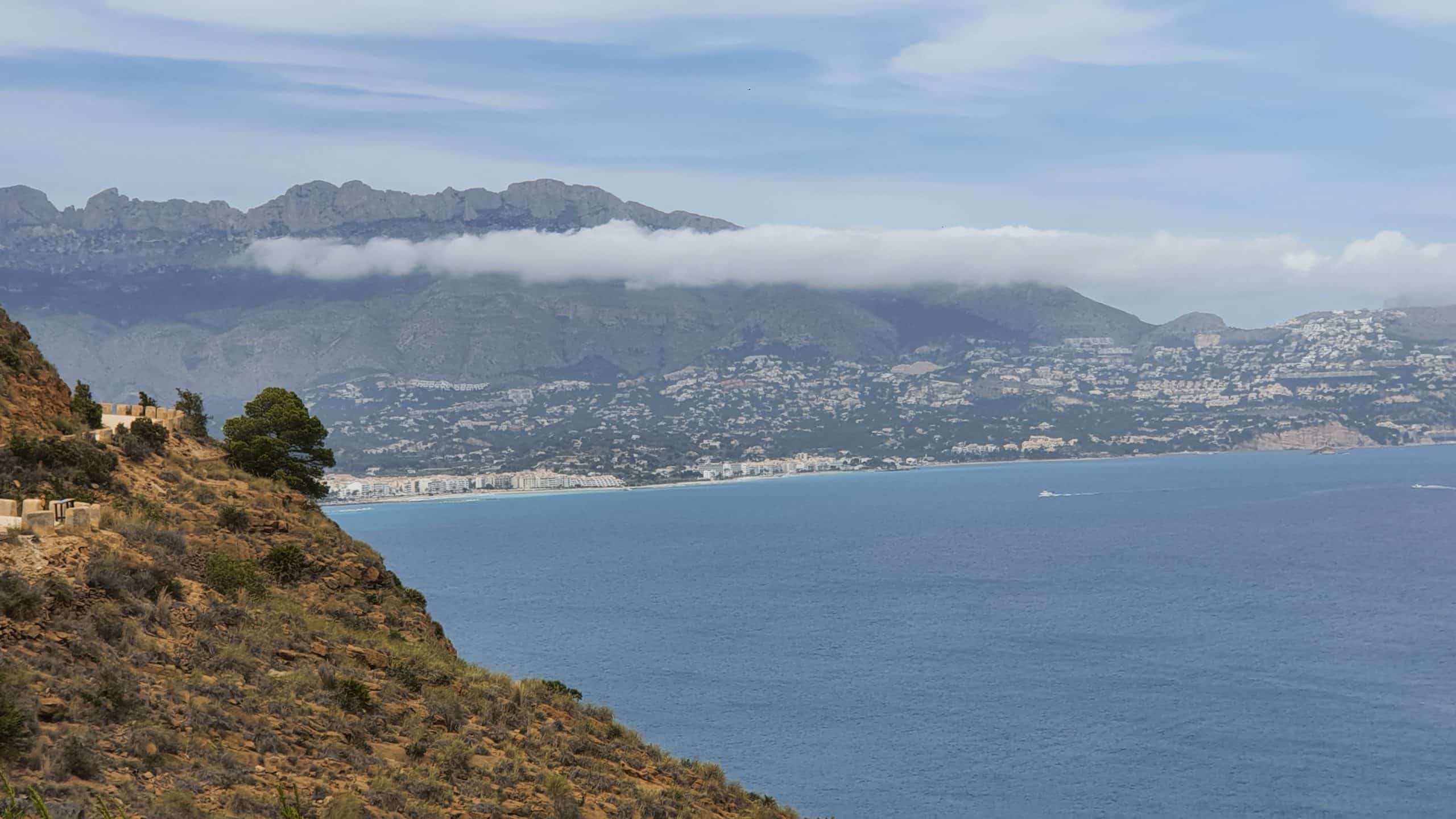 There are tracks that will take you down for a closer look – if you dare. There are also several viewing points dotted along.

The lighthouse is a working lighthouse and is automated and powered by  solar energy. It does open to visitors but wasn’t when we went, which was a shame – maybe next time.

As we got back into Albir we wanted to have a look around this holiday town which is close to Benidorm but with a totally different vibe.

Albir is dominated by a lovely sweeping bay of turquoise clear waters backed by the usual bars, cafes and restaurants,  on the beach side promenade the Passeo de Las Estrellas with Hollywood style plaques, honouring the stars who have won awards at the Albir Film Festivals.

There are lots of little boutiques, souvenir shops, supermarkets and different standards of hotels.

Their Casa de Cultura is always busy with different activities and shows. It has a Concert Hall, TV Studios and Exhibition space. They have a jazz festival in October, with dance and orchestras concerts throughout the year.

There is also an open air Roman ruins museum, where you can see the ruins of a villa from the Roman times as far back as the 4th and 6th Century AD.

If you have children and was wondering what there is for them to do, well Albir  is close to Terra Mitica, the famous Theme Park.  There is also horse riding, you can hire bikes, Aqualandia in Benidorm which is only 7k away, minigolf, El Chiringuito Children’s Park on the beach front and of course the lovely beach itself.

I found the people really friendly and the café we sat at gave us tapas with our drinks, the owner was such a jolly person and when we paid the bill he gave us free top ups of our wine and then bought out 2 mini super burgers for us. Wonderful, we had a great time.