“We need to move urban mobility into the third dimension: airspace. And we need to do it as efficiently and sustainably as we can,” said the authority’s director general, Ángel Luis Arias.

Plans are scheduled to begin demonstrating Volocopters in Barcelona and Santiago de Compostela in 2022.

Arias said Enaire are currently working on European projects involving the use of flying taxis – and other flying vehicles – to move people around urban and semi-urban areas, as well as the use of drones to deliver goods.

“Enaire, in its capacity as a public company of the Ministry of Transport, Mobility and Urban Agenda, is willing to fulfil its duties to attract and help any private sector companies or public organisations that are interested in allowing Spain to position itself at the forefront of the development and operation of this new sector,” said Ángel Luis Arias. 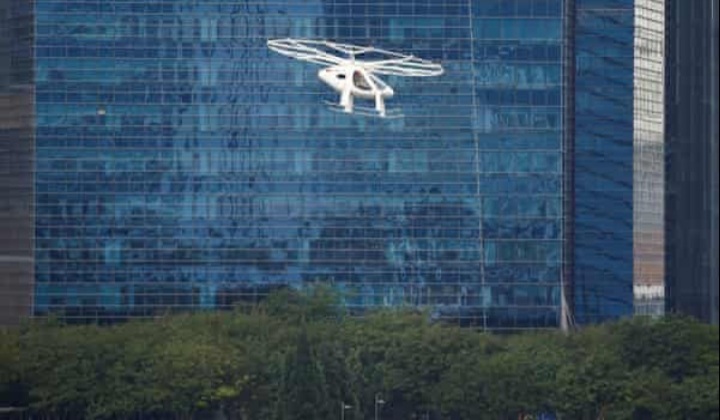 Enaire is participating in two EU-funded projects that belong to Horizon 2020, the union’s biggest research and innovation programme to date.

One is led by the European Organisation for the Safety of Air Navigation, the other by the multinational technology company Everis.

Projects are afoot to demonstrate air taxis in Europe in 2022. Enaire said in a statement it will manage the flight of the first air taxis in Spain, which will take place in Barcelona and Santiago de Compostela.

Passenger-carrying drones have been successfully flown in recent years by companies, including China Ehang and the German aviation startup Volocopter.

In July 2019 the Spanish technology company Tecnalia unveiled its prototype for a pilot-less, one person air taxi, designed to carry a person or load of up to 150kg.